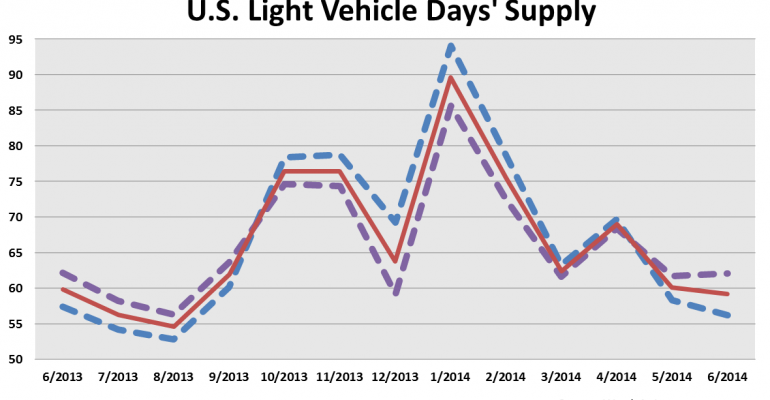 Even with an atypically low number of selling days in the month – 24 vs. the usual 26 or 27 –June’s volume knocked 2.1% off of May’s inventory total, coming in at 3.487 million LVs, 8.4% above year-ago. June inventory usually finishes flat to slightly higher than May.

But it was the first time since February 2012 that imports ended a month with lower inventory than the same year-ago period. Part of the reason for the downturn was spiking domestic inventory for the Honda Fit and Mazda3, which recently began first-time North American production. That trend will strengthen over the summer as first-time local sourcing of the Mercedes C-Class and Mazda2 kick in. Also, import stocks of the Nissan Rogue, which started local output last year, will begin to dry up now that Nissan has stopped dual-sourcing from Japan.

Inventory of domestically made LVs declined less than 1% from May, but was up 11.8% from year-ago, in part due to the aforementioned first-time local sourcing. North American production in June increased an estimated 6.7% from year-ago, with an estimated 76% of that total meant for the U.S. market. Stronger production helped keep June’s 1.2% sales volume increase of domestic LVs vs. like-2013 from being a bigger drain on dealer stocks.

Despite the healthy volume cut from May, domestic days’ supply was slightly higher than usual for the month, which bodes well for another strong month of sales in July, at least for locally built vehicles. Furthermore, even though more plants will be taking vacation shutdowns in July compared with recent years when the industry was struggling with capacity constraints to keep up with surging demand, North American production is forecast to increase 20% from July vs. year-ago.