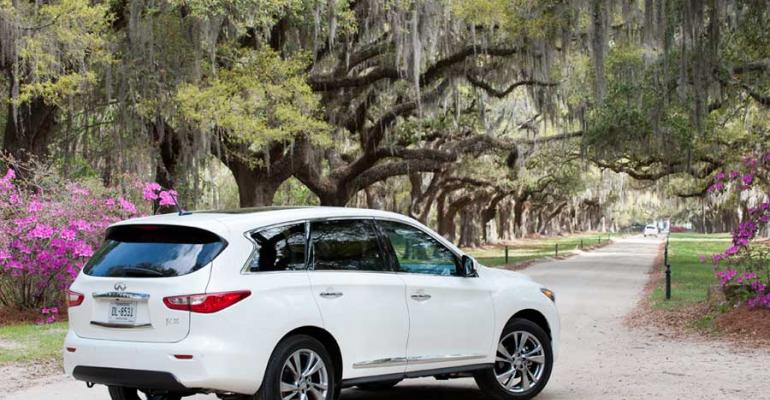 The 7-passenger Infiniti JX cross/utility vehicle takes its place on Ward’s 10 Best Interiors’ list for 2012 with most of our judges agreeing easily on the model, which is the newest addition to the Japanese luxury brand’s U.S. lineup.

The JX checks all our boxes, with quality materials; sumptuous maple-wood trim; cohesive, flowing design language; large, clearly defined controls; and features such as its clamshell-style folding second row, reducing the drudgery of climbing into the third row.

“I really liked the innovative way they made access to the third row easy,” editor Steve Finlay says. “The doors are bigger, and then there is the clever way both the back and bottom of the seats fold so the whole unit slides up more. It’s not rocket science, but it works.”

Our JX represents a great value.

Coming in at $54,800, this tester offers an 8-in. (20-cm) color touchscreen with crystal-clear map software; a voice-recognition system that never tripped up; a huge panoramic moonroof; a 15-speaker Bose audio system; and a rear-seat entertainment system with two 7-in. (18-cm) color monitors able to play content from two different sources.

Judges love that most of the JX’s standard features appear on the bargain-basement $40,450 front-wheel-drive base model as well.

There’s no reason to go thirsty in this vehicle, which has an astonishing 14 places for beverages (eight cupholders and six bottle holders).

All buyers also get violet-illuminated switchgear and leather seats with a wavy pattern stitched into them, echoing the curves of the dash and door panels. The wave pattern is repeated on the edges of the speedometer and tachometer gauges, which resemble the crimped edges of a piecrust.

“This is a classy family hauler. Even after driving all the Mercedes and Audis, this gave me the best feeling of flat-out luxury,” editor Jim Irwin writes on his score sheet.