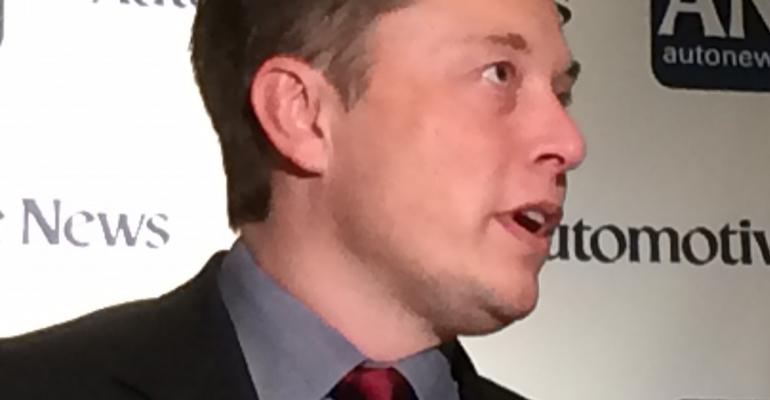 The CEO of electric car maker Tesla is low-keyed in the Motor City.&nbsp;

DETROIT – Tesla will sell 500,000 vehicles a year by 2020, eventually make a profit, probably partner with select inoffensive franchised dealers at some point and may report its sales more openly than it does now.

So says Elon Musk, the head of the 10-year-old electric vehicle maker, during an appearance in the heart of the U.S. auto industry that some people claim he is challenging. If he is, he’s awfully subdued about it.

Some speculated he might strike a defiant tone in the Motor City while addressing the Automotive News World Congress held in conjunction with the North American International Auto Show.

But Musk is low-keyed, choosing his words and occasionally showing a droll sense of humor. His prepared remarks last only a few minutes. But he speaks at length during a sit-down Q&A on stage.

He gets around in a reserved way to challenging the auto industry: He says it should take a greater interest in electric vehicles because they offer tremendous opportunities and are more environmentally friendly. He foresees a time when EVs will rule the world of transportation.

Musk founded Tesla Motors because “it was important to have an example of an electric car that was great” and not resemble a golf cart. So far, Tesla offers a 1-vehicle lineup consisting of the Model S, which sells for about $70,000. More is to come.

The launch of the Model X is behind schedule, but Musk says it will show up in the summer, be worth the wait and contribute to the company goal of making a half-million vehicles in 10 years.

“If we don’t make a lot of electric vehicles, we’re not doing the best we can,” he says, predicting global sales of “a few million cars by 2025” as consumer interest in EVs grows.

Also in the works is a Tesla 3 model that would sell for about $35,000 and fall within the financial reach of budget-minded car consumers. Musk foresees the smaller car bringing bigger sales.

At the auto show down the street, General Motors introduced the Chevrolet Bolt concept electric vehicle. It would sell for $30,000 after deducting tax incentives from the sticker price of $37,500.

It’s described as a “Tesla fighter,” but Musk isn’t putting on the gloves to battle the Bolt.

“I don’t see it as a competitive threat,” he tells a standing-room-only crowd of journalists in a hotel conference room after his presentation. The hotel is part of the Renaissance Center complex that houses GM’s headquarters.

“I’m pleased to see (GM CEO Mary Barra) and GM do it. It seems that (GM) will do something significant with the Bolt, and that’s great.”

Automakers that keep product lineups that are heavy on internal-combustion engines should pay a tax for the carbon emissions those vehicles produce, he says. “If someone is dumping chemicals into the atmosphere, they should have to pay for it.”

Musk recalls the going tough in the early years of Tesla Motors. He recounts a rather gloom Christmas of 2008 when the U.S. economy was in a recession, people weren’t buying many cars and he was financially “tapped out” after personally investing in Tesla.

But he managed to raise $5 billion from private investors and receive a $165 million government grant. He says the investors saved Tesla, not the government because the company didn’t get the grant until 2010.

He says Tesla would be profitable today if it were just relying on Model S sales, although he won’t say exactly how many of those were delivered last year. He acknowledges it’s fewer than the 35,000 units he had predicted. He blames unexpectedly weak fourth-quarter sales in China for falling short.

“We’re in negative cash flow because we are investing so much in facilities and product development,” Musk says. “If we weren’t investing huge amounts of money, we’d be very profitable.”

Long-term, he foresees building plants in China and Europe to serve local market. He doesn’t rule out a second U.S. plant. Nor does he rule out Detroit as a potential site for that prospective factory.

“That’s not out of the question,” he says. “Maybe Michigan shouldn’t stop us from selling cars here though.”

That’s in reference to the state legislature in October reinforcing Michigan franchise laws to prevent Tesla from bypassing franchised dealers and selling cars directly to consumers.

Tesla has fought state-by-state to use its factory-direct approach. It has won some, lost some and reached a few compromises. For example, New York allows Tesla to operate five of its own stores. But sales points beyond that must be a franchised dealership.

The company’s direct-sales model is not an effort to defy the traditional dealership system but rather “we need to establish our initial retail foundation before we consider taking on franchised dealers,” Musk says.

“At some point, we’d consider franchised dealers, but we want to establish a few stores of our own,” he says “We can transition later, if we find the right partners.”

But some dealers need not apply, particularly ones who have rapped Tesla’s retail model.

“Those that attacked Tesla, we’re not going to turn around and form partnerships with them,” Musk says.

Tesla also has taken heat for holding sales data close to its chest. Every automaker except Tesla reports sales by market and on a monthly basis.

“We probably will in the future,” Musk says, adding that it makes more sense for the company to release sales figures every three months rather than every month.

“A lot of our cars are pre-ordered and we make cars in batches, ” he says. “You’ll see huge variants in deliveries because of that. It’s really when the boat left, but people can get confused.”

Musk says he’ll remain with Tesla Motors for the rest of his life. “I’m committed to stay. I may not always be the CEO but I’ll be with the company forever. I’m committed to make a mass-market car.”