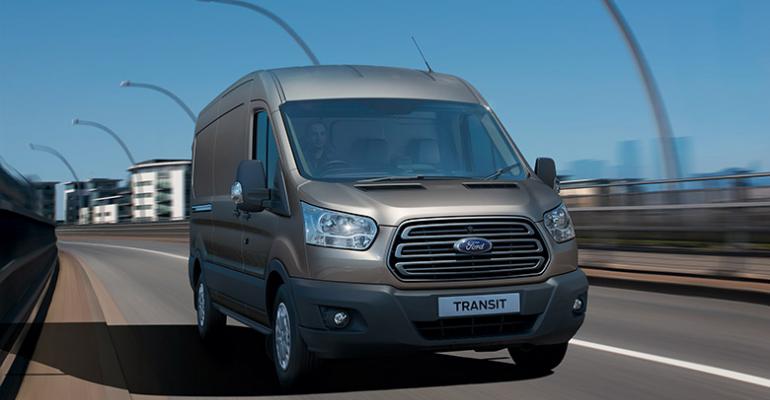 The European Environment Agency says France, the U.K. and Germany accounted for 60% of light-commercial vehicles registered in 2014, and EU average emissions dropped despite LCVs&rsquo; subpar performance in the latter two countries.

BRUSSELS – European automakers may be making significant progress in reducing emissions from light-commercial vehicles, but robust LCV demand in Germany and the U.K. means pollution remains comparatively high in those key markets.

European Environment Agency figures show automakers slashed emissions from vans of up to 8,900 lbs. (2 t) last year, with the average vehicle sold approximately 2.4% more fuel-efficient than those sold in 2013, but U.K. and German manufacturers are trailing.

According to the data, which the EEA says is preliminary pending verification by automakers, with final figures due in the fall, fuel efficiency has continued to improve. New LCVs sold across the European Union now emit almost 6 g/km of carbon dioxide below the 2017 target of 175 g/km, which manufacturers achieved four years early in 2013.

Germany was the third-worst performer on emissions and the U.K. sixth, while Slovenia, whose 5,930 LCVs emitted an average 186.3 g/km, ranked fourth and Austria, where 29,834 vans averaging 183.7 g/km were sold, was fifth.

“We have not done an in-depth analysis of the vans’ data linked to the market in each country,” an EEA spokesman tells WardsAuto. “But as a general the rule, fuel efficiency of a van, (or) the average (CO2 emissions), depends on factors such as mass of the vehicle, engine power and engine capacity.”

“Germany and U.K. are placed in top 10 regarding average mass of vans sold,” the EEA spokesman says. “So one reason that the average van sold in the U.K. or Germany emits more (CO2) is because people buy heavier vans with more engine power and capacity. The number of electric vehicles sold would also bring down the average (emissions), but electric vehicles only account for less than 0.5% of the sales across Europe.”

Diesel vehicles still make up the vast majority of van sales (97%), with those run on alternative fuels such as liquid petroleum gas or compressed natural gas, less than 2%, the EEA figures show.

A spokeswoman for the U.K.’s Society of Motor Manufacturers & Traders acknowledges operators “are generally going for the bigger vehicles across all sectors of the commercial-vehicle market because it gives them a lot of flexibility as to what they can get in them.”

She cites an SMMT release showing robust van- and truck-market growth in May, noting, “The biggest gains in the month were again made in the heavier ends of the van and rigid-truck markets.”

The EEA says just three countries accounted for 60% of LCVs registered in 2014: France (24%), the U.K. (21%) and Germany (15%), yet EU average emissions dropped despite the high figures in the latter two countries. That prompted Greg Archer, clean-vehicles manager at environmental group Transport & Environment, to comment: “T&E warned that weak vans targets were irrelevant and could easily be achieved by manufacturers. We have been proved right. The EU needs to set a 2025 target of 100 g/km to make vans cut emissions at the same rate as cars.”

However, a spokeswoman for ACEA, the European automakers group, insists the fall in emissions only followed diligent long-term efforts and LCV makers face “a significant challenge” to reach the EU’s 2020 target of 147 g/km, meaning a 13.1% cut in emissions in the next five years.

While the industry “hopes and expects” to meet the 2020 target, the spokeswoman says there now are “diminishing marginal returns to CO2 reduction. The low-hanging fruit have already been plucked, making further reductions more costly.”

The EEA only started monitoring LCV emissions in 2012 in line with a 2011 regulation requiring EU member states to track data for every new van registered, including type, variant, version, CO2 emissions, mass and fuel type.

Automakers Not Sold on Revised EC Emissions Rules
May 27, 2015