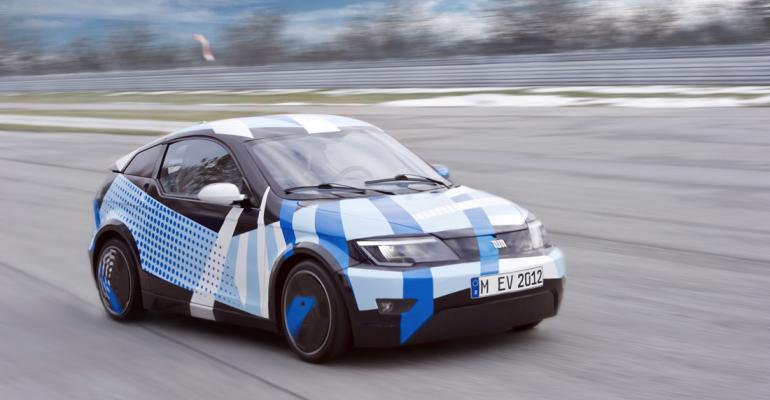 Unlike the 4-passenger BMW i3, the Visio.M prototype is a 2-seater. Its monocoque carbon- fiber body and lightweight powertrain add up to a curb weight about 600 lbs. less than the i3.

NEW YORK – A team of German researchers has created a city electric vehicle that is designed to meet all crashworthiness standards. Known as the Visio.M, the EV weighs just 1,102 lbs. (500 kg).

The researchers at the Technical University of Munich (TUM) were joined by a consortium of auto makers, suppliers and German government agencies to produce the lightweight EV.

Containing roughly the same amount of carbon fiber as the BMW i3, the research team has kept the prototype's weight down without compromising safety, it says. The EV’s monocoque carbon- fiber body and lightweight powertrain add up to a curb weight about 600 lbs. (272 kg) less than the BMW i3.

However, unlike the 4-passenger i3, the Visio.M prototype is a 2-seater.

The Visio.M has completed some preliminary drive and chassis tests, but the project still has 15 months to run, a TUM spokesman says. Targeting an ultra-compact city vehicle that can go into series production, the researchers equipped the car with a 15-kW (20-hp) compact asynchronous electric motor.

The i3, in comparison, will be powered by 123-kW (165-hp) electric motor when it goes on sale late this year. Using a smaller electric motor means the Visio.M will require a smaller battery pack than BMW uses in the i3.

The prototype's transmission system incorporates lightweight gears resting on hollow shafts. This would make the gears up to 15% lighter than conventional designs.

TUM says occupant safety is the top priority of the project. That's why the tiny EV will get a host of active and passive safety systems to insulate the driver and passenger from potential dangerous crash energy.

Among the systems that already have been put through early tests at a facility near Munich are specially designed seatbelts, antilock braking and an electronic stability program. The researchers consider these tests another success in the evolving development of the Visio.M.

The TUM spokesman says the Visio.M will differ from the i3 in driving performance, range and comfort. The research vehicle also will have a different interior, along with its own safety and payload capabilities.

The Technical University of Munich is a scientific partner. The 2½ year project is funded at €10.8 million ($14.1 million) within the framework of the program IKT 2020 and the research focus area "Key Technologies for Electromobility- STROM" of the German Federal Ministry of Education and Research.