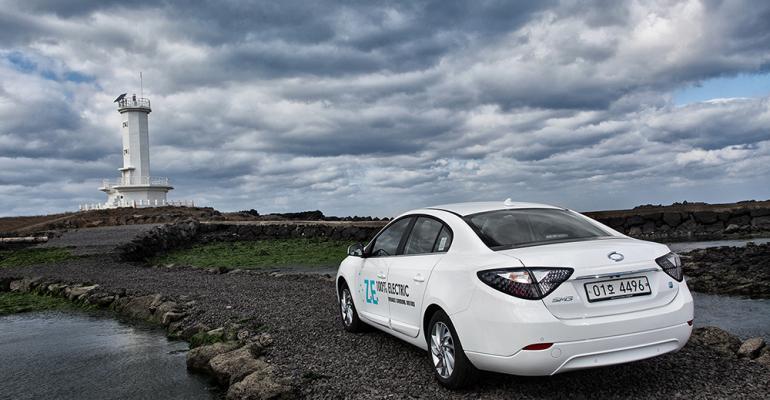 As EV sales mount, Korea consumers will have more choices. Virtually all of the 22 car brands imported into the country offer an electrified vehicle.

Their appetites whetted by some of the world’s highest subsidies for electric vehicles, automakers are flooding the nascent South Korean market with strong EV contenders in every vehicle class from minicar to luxury sedan.

The South Korean government’s Ministry of Environment is providing a 15 million won ($13,900) nationwide subsidy for EV purchases, and 10 major cities or provincial jurisdictions are providing additional subsidies ranging from 3 million to 8 million won ($2,800 to $7,400).

The beautiful semitropical island of Jeju, which is located about 60 miles (100 km) south of the Korean peninsula in Korea’s East Sea, is Asia’s most sought-after minimarket, both for all of Korea’s domestic EV producers and most of the major brands imported from other countries.

The Jeju government adds a hefty 8 million won subsidy to the federal incentive for EVs purchased on the island. The combined price abatement of 23 million won ($21,000) nearly halves the EV’s purchase price in some instances, dramatically reduces it in all others and makes the Chevrolet Spark EV less than the cost of a gasoline-powered Spark.

While the federal subsidy is open-ended and applies nationally, there is a limit to the number of subsidies Jeju will grant, although enthusiastic news media often overlook it. For 2014 Jeju has a cap of 500 subsidies, but officials say they are swamped with thousands of applications.

Still, every global EV maker with sights on Asia wants a piece of the Jeju action. The 720-sq.-mi (290-ha) island is a perfect real-life test bed and consumer proving ground for their products, one where the daily driving range is limited by the island’s size and where recharge stations abound.

This will be achieved in steps, with the initial subsidy phase adding 500 new EVs this year, then more subsidies to boost the number to 29,000 by 2017 and to 94,000 by 2020. The island has 500 easily accessible 240V recharge stations, said to be the highest density anywhere in the world. More stations are being added every month.

At the 1st International Electric Vehicle Exposition, held March 15-21 at Jeju’s southern port of Seogwipo, thousands of potential new EV customers tried their hand at driving the various offerings. Journalists, engineers, sales personnel and consumers avidly listened to presentations by all of the automakers.

Though it was not totally anticipated by Expo organizers, competition is super-hot and the South Korean EV market, while quite small, promises to be volatile.

For instance, while the well-regarded Korea Automotive Research Institute predicts a total market of 1,200 EVs nationwide for 2014, three of the key players at the Jeju Expo announced sales targets that substantially exceed the KARI estimate.

Renault Samsung, which broke the ice in October with introduction of its SM3, is the current market leader by a long shot, selling 453 or 58% of the 783 EVs sold throughout Korea in 2013. The compact sedan accounted for 67% of all EVs sold on Jeju Island last year.

CEO Francois Provost says RSM expects to take 60% of the Korean market this year, which means sales of 720 units.

Also during the Expo, Vincent Carre, Renault Group chief of global electric vehicles, expounded on parent Renault’s considerable experience and success. He notes 40,000 Renault Z.E. (zero-emission) vehicles and 140,000 Renault-Nissan Alliance EVs have been sold since 2011, with the Renault models claiming 50% of the European EV market.

Carre lists the Renault EV  range, consisting of the diminutive Twizy, ZOE city car, SM3 and Kangoo Z.E. electric van, although the automaker’s designs on the Korean market for now are limited to the SM3.

He says RSM, which manufactures the vehicle at its Busan plant, may be the source of SM3 production for all world markets.

In its Jeju presentations, Kia predicts it will sell 500 units this year in Korea, after the new entry launches in April, and its 2015 sales goal is 900. The automaker is targeting 2014 global sales of about 5,000, mostly in select markets in the U.S. and Western Europe.

So Kia is planning to capture nearly 42% of the Korean sales forecast by KARI, with RSM accounting for the rest of the domestic market. BMW, however, has other plans.

The German automaker previews its i3 at Jeju, designed from the ground up as a distinctive EV, quite different in appearance from the rest of the brand’s lineup but maintaining high quality and high-end appointments.

BMW Korea CEO Kim Hyo-joon says he expects to sell 250 i3 models in 2014 following the EV’s launch in April. That’s roughly 21% of KARI’s estimated nationwide volume of 1,200 units. But even with only 250 sales of i3s, the three automakers have their sights set on 1,470 deliveries among them, outstripping the anticipated market by more than 22%.

Kim’s forecast mostly is predicated on tight supplies of the i3. His team is confident of selling all it can import this year, including 70 to 80 units on Jeju alone.

The i3 is not for the economy-minded. Unofficial release of pricing puts it in the 64 million-69 million won ($59,000-$64,000) range. But for German car enthusiasts and aficionados who are in the vanguard of affluent trends the i3 is a must.

Renault Samsung, Kia and BMW Korea are not alone in staking claim to Korea’s EV market.

Nissan also exhibited at the Jeju Expo. It operates 12 showrooms and 10 service centers in key Korean cities and has a solid and growing presence. In February, the Korea Automobile Importers and Distributors Assn. ranked Nissan seventh among its top 10 performers, selling 327 units for the month.

Nissan’s Billy Hayes, vice president-electric vehicle operations and head of the global Leaf program, says the automaker will introduce the Leaf EV in Korea late in second-half 2014. Many Expo visitors test-drove the Leaf, and Hayes’ team racked up a number of preorders.

“We can deliver as many Leaf units as our Korean customers want,” he tells reporters.

Taking advantage of the Korea-U.S. Free Trade Agreement, Hayes plans to import the Leaf from the U.S. plant in Smyrna, TN, with deliveries to customers beginning around November. It will be marketed initially only on Jeju.

Without elaborating, Nissan spokesmen say the Leaf as sold in Korea will have more features than those available in other markets. Some of that has to do with Korean government regulations.

Reports from China indicate Nissan also is discussing a joint venture with Dongfeng to produce the Leaf in that country.

One might anticipate that major home player GM Korea’s Spark EV would gain some sales momentum this year. While the minicar that is produced only at Changwon on Korea’s south coast has done well as an export vehicle to the U.S., it hasn’t caught on in Korea thus far.

Launched in October, the Spark EV sold just 40 units in Korea in 2013. In the U.S., GM delivered 614 units between its June launch and year-end.

GM Korea sold 14 Spark EVs domestically in January, and in February it managed to deliver just two. In the U.S. 93 units were sold in January and 71 in February.

Analysts are not surprised by the EV’s poor showing in Korea. They say consumers regard the regular gasoline- or diesel-powered Spark as the perfect urban vehicle, offering a good ride, ample power, good looks and appointments, low operating costs and local parking benefits.

With these attributes, few customers think of reducing operating costs a little more by making the considerably higher investment in a Spark EV. But GM Korea has yet to market the car in earnest. It had a team pitching at the Jeju show and consumers were lining up to drive the minicar over the scenic, semi-mountainous roads. Many were pleasantly surprised.

A GM Korea spokesman declines to give WardsAuto a 2014 sales target, noting “electric vehicles are still a developing market segment in Korea.”

The spokesman says, “The Spark EV manufacturer’s suggested retail price in Korea is 39.9 million won ($37,000). In the case of Jeju, the price of the Spark EV is about 17 million won ($16,000) after the full Korean government incentive and the Jeju incentive.”

That’s less expensive than the gasoline-powered Spark and presumably a giveaway price in many consumers’ eyes.

When GM Korea CEO Sergio Rocha announced the Spark EV program in August, he said the automaker was looking at electrified applications for other vehicles, as well.

“We continue to look at other advanced- propulsion technologies and believe (the) EV has a place for a specific customer and use,” says a GM Korea spokesman.

Should the Spark EV start to resonate, it would become another major player, with a size and style aimed at widespread appeal. Indeed, the gasoline/diesel Spark by far is the biggest seller in GM Korea’s portfolio.

As EV sales mount in Korea, the arena will expand. Virtually all of the 22 import car brands offer an EV in other markets.

WardsAuto has learned Volkswagen Korea, the country’s No.3 importer by sales, will launch sales of its E-Up microcar and all-new EGolf beginning in 2015.

One French manufacturer, Mia Electric, has caught the imagination of many Korean reporters and young consumers with its economy-priced electric minivans pitched at the Jeju Expo.

The driver sits alone at the center of the vehicle center with one of three configurations behind him: open cargo space, three seats or four seats.

CEO Michael Boos says he wants to produce the minibus in Korea, as opposed to importing it from France. A local operation, Mia Electric Korea, was established in February. But reportedly the company, 88% owned by Asian consortium Focus Asia, is in financial difficulty.

There has been much negative conjecture about Hyundai-Kia Motor Group implying Hyundai has dragged its feet in EV development and will be pummeled by rival automakers as it tries to catch up.

Critics note Hyundai was a no-show at the Jeju Expo. However, analysts note the Korean teaser introduction of the Kia Soul EV took place March 11 at the Hyundai Motor Group Research and Development Center in Namyang, just ahead of the Jeju show.

The Soul EV is not simply a battery-electric drivetrain cobbled to a production Soul body. The precise engineering development, shared by the SK Innovation battery-pack specialists over the course of three years, has resulted in an EV with every significant component and system developed in-house.

Namyang avoids redundant technologies, instead developing advanced technologies applicable to both the Hyundai and Kia brands. Thus, Hyundai has instant access to every bit of EV technology and all of the testing data that went into development of what appears to be the well-executed Soul EV.

Hyundai also will benefit from the Soul EV’s initial marketing experience in both Korea and select markets in the U.S. and Europe.

Some analysts believe Hyundai, already at work on its own dedicated battery-electric vehicle for release in 2016, will take the route followed by the Leaf and i3 and develop a model that’s new from the ground up.

Whichever way Hyundai goes, it will create an EV that can be produced anywhere in the world through the automaker’s immense production network, notably in China. That country has begun offering generous EV incentives to combat the world’s worst urban smog.

The spring of 2014 may be seeing the global EV market bloom further on Korea’s exotic Jeju Island.