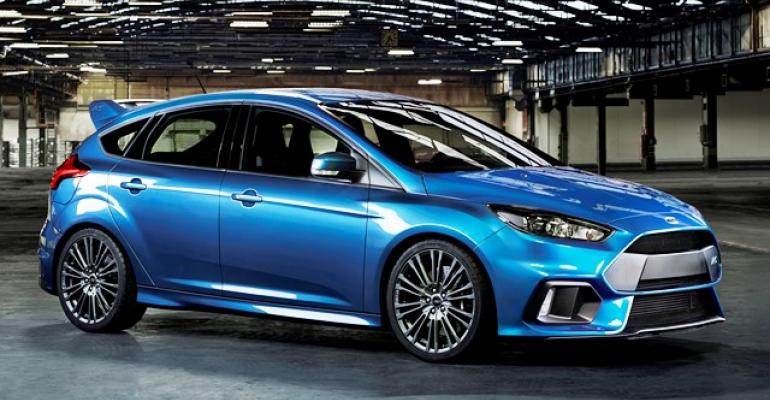 Ford reveals its all-new Focus RS, slated for arrival next year with a 2.3L EcoBoost 4-cyl. that carries a number of upgrades from its first application in the all-new Mustang. Ford isn&rsquo;t discussing pricing or volume projections.

DEARBORN, MI – Driving enthusiasts who couldn’t understand why Ford never brought either the first- or second-generation Focus RS to the U.S. will be consoled by news today from Ford: The all-new third-generation car comes to the U.S. sometime next year.

The Focus now is a truly global platform that enables sales around the world, and the Focus RS derivative also will be available in Asia and Europe. It will be assembled in Saarlouis, Germany, on the same line building standard Focus compacts.

Ford executives say the all-wheel-drive Focus RS didn’t come to the U.S. previously because there wasn’t much demand, but the market dynamic has changed with the recent arrival of the Audi S3 and Mercedes CLA45 AMG joining the segment standbys, Subaru WRX STI and Mitsubishi Lancer Evolution.

Ford says it expects premium-minded enthusiasts who normally would shop Audi, Mercedes or BMW to give the Focus RS a serious look.

Another new addition to this group of AWD high-output compacts is the 5-door Volkswagen Golf R, which will go on sale by spring with a starting price of $36,595 and a 2.0L turbocharged 4-cyl. rated at 292 hp.

Coming about a year later than the Golf R, the Focus RS will be available only in a 5-door body style with a 2.3L EcoBoost 4-cyl. rated at no less than 315 hp. Ford executives are not discussing pricing but say the vehicle will be competitive with the segment. Both the STI and Evo have base stickers of $34,495.

The steel-bodied Focus RS was unveiled today in Cologne, Germany, inside the plant that assembles engines, transmissions and the Fiesta and Fusion. Ford executives met this morning with journalists in the product-development labs here for a simulcast from Germany.

The automaker touts its new Ford Performance All-Wheel Drive system, which includes Dynamic Torque Vectoring by transferring torque from side to side for better grip, handling and agility during aggressive cornering.

Torque-vectoring systems are intended to mitigate understeer while cornering by sending torque to the outer rear wheel based on inputs such as steering wheel angle, lateral acceleration, yaw and speed. The effect is a smoother transition through a turn, rather than plowing through it.

GKN is Ford’s partner for the twin electronically controlled clutch packs on each side of the rear drive unit that enable torque vectoring in the Focus RS.

Up to 70% of drive torque can be diverted to the rear axle, and up to 100% of available torque at the rear axle can be sent to each rear wheel, the automaker says.

The all-aluminum 2.3L EcoBoost 4-cyl., coming from Ford’s plant in Valencia, Spain, carries a number of upgrades from its first application in the all-new Mustang, including new cylinder heads and cooling system and a less-restrictive intake.

Plus, the low-inertia twin-scroll turbocharger cranks up the airflow with a larger compressor, and a bigger intercooler maximizes charge density, Ford says.

In the rear-wheel-drive Mustang, the 2.3L EcoBoost, with DOHC and four valves per cylinder, is rated at 310 hp and 320 lb.-ft. (434 Nm) of torque and runs on regular unleaded fuel. The automaker is not releasing a torque number for the RS.

Relative to the Mustang’s 2.3L, Ford says the new cylinder head in the Focus RS is produced from an upgraded alloy that can withstand higher temperatures, and it’s mounted on a beefier head gasket with improved thermal capability. The block uses stronger high-tensile cast-iron liners.

The hot-hatch’s arrival will not spell the departure of the more-affordable Focus ST, which will remain in the U.S. market with a starting price of $23,625.

Compared with other Focus models, the RS gets an exclusive sport suspension with stiffer spring rates, bushings and antiroll bars. Steering is electric power-assisted.

Ford is not discussing projected volumes. It sold nearly 15,000 units of the previous Focus RS, which was available primarily in Europe, South Africa and Australia over the course of a 2-year production run beginning in 2009.

The automaker says the Focus RS is one of 12 Ford performance vehicles slated for arrival by 2020.