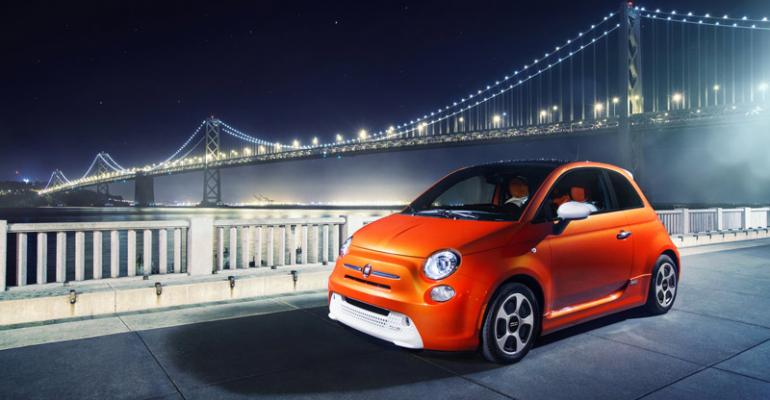 The California-only vehicle is sold at 28 Fiat dealers in the state, accounting for more than 10% of its dealer network.

BALTIMORE – Orders for Fiat’s electrified 500 subcompact, available for retail only in California, have reached full capacity, a top executive says.

“We’re pretty much sold out for the year,” Jason Stoicevich, president and CEO of the Fiat brand in North America, tells reporters during a media drive for the newly launched longer-wheelbase 500L, which features a conventional powertrain.

Stoicevich, previously director of the brand’s California operations, has been at the helm of Fiat for just two months, having taking over for Tim Kuniskis, who moved to president and CEO of the Dodge brand.

“It’s a huge market, import-dominated,” Stoicevich says about California, which he estimates accounts for 20% of U.S. car sales.

Though the 500e is based on the veteran Italian compact, its electric powertrain was developed at Chrysler’s Auburn Hills, MI, headquarters and is assembled in Mexico.

“The electric-car market is alive and well in California,” Stoicevich says. There are 28 Fiat dealers in the state, more than 10% of the 205 in the total U.S. network.

Stoicevich also reveals orders for the next Gucci-trimmed Fiat 500, which will differ slightly from the first Gucci 500 introduced when the brand re-launched in North America in 2009, already have sold out as well.