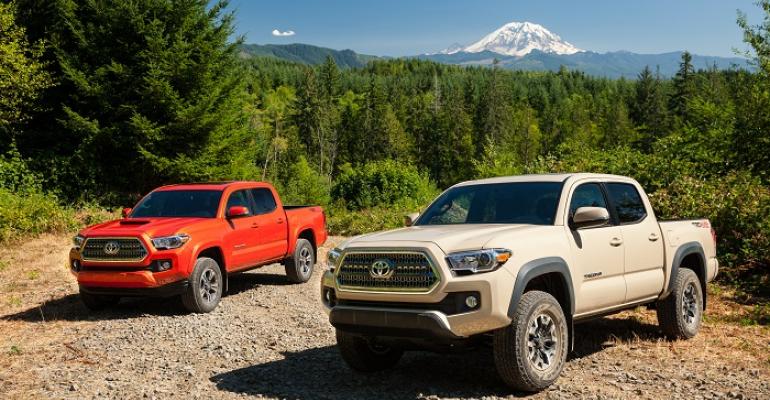 Sales executive Rick LoFaso says most of the initial sales of the &rsquo;16 Tacoma have been to existing owners, a significant number considering 3 million have been sold in the past 20 years and 75% still are on the road.

OAK BROOK, IL – The new-from-the-ground-up ’16 Toyota Tacoma is doing so well that the automaker has less than a 10 days’ supply of the small pickups in dealer stock, says Rick LoFaso, corporate manager-vehicle marketing for Toyota Motor Sales U.S.A.

“Sales are up 17% for the year,” he says at an unveiling of the truck for the Midwest Automotive Media Assn. here.

While Tacoma production will be limited to about 155,000 units this year, help is on the way.

“We're maxed out at 155,000 this year but will be elevating production at our plants in San Antonio and Baja (Mexico) next year,” LoFaso tells WardsAuto in an interview following the presentation.

LoFaso says most of the initial sales of the ’16 Tacoma have been to existing owners, a significant number considering 3 million have been sold in the past 20 years and 75% still are on the road.

“Current owners are more familiar with Tacoma and Toyota, and it’s common to sell a new model to existing owners at first and then slowly start getting the conquests as people get the message about the new truck.”

LoFaso says despite Ford’s departure from the segment, he sees small-truck sales doing well industrywide now that General Motors has reentered the market after a 2-year absence with its new ’15 Chevy Colorado and GMC Canyon and Honda is showcasing a concept of its next generation Ridgeline pickup planned for ’17.

LoFaso says Toyota is aiming primarily at younger buyers 25 to 39 with the new Tacoma and secondarily at 40- to 59-year-olds. Already the median age of buyers has fallen to 47 from 55 for the previous-generation truck.

“Selling to the young is like buying an annuity,” he says, “because you count on 25-year-olds buying from you again every three to five years.”

But the executive doesn’t see owners of fullsize trucks such as Toyota’s own Tundra moving down into the smaller Tacoma based on gasoline prices.

“We don’t see Tundra owners cross-shop Tacoma. It’s been some time since we’ve seen gas prices at $4 a gallon, yet it’s not so much gas prices as it is constant movement in gas prices that tends to have some people switch – but that’s mostly among car buyers.”

And don’t look for diesel power in the Tacoma even though GM has introduced diesels in its competing Colorado and Canyon pickups.

“We don't have diesel engines in Tacoma now, and while we don’t talk about future product, we don’t see great demand for diesel in this size truck,” Lo Faso says, noting more than 40% of Tacoma buyers use the truck for off-roading. Diesel towing power isn’t high on their lists of priorities.