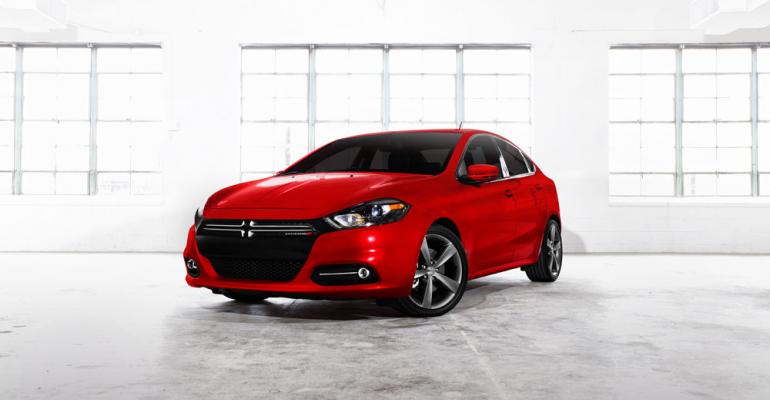 Chrysler says it is investigating the possibility of a true high-performance compact, which it has not had since 2007.

Dodge inches closer to higher-performance versions of its Dart compact with the introduction of a GT trim that begins production in second-quarter 2013.

Dodge-brand enthusiasts have clamored for an R/T (road/track) version of the Dart since the car’s introduction last year. Not too far in the distance is an even higher-tuned SRT version, which has been on the wish lists of fans and insiders alike.

While Chrysler executives have been coy about an SRT Dart, the auto maker today says it “continues to investigate” the possibility of an R/T-trim Dart. Dodge has not had an R/T compact since the ’07 model-year Caliber. Only the Charger, Challenger and Durango wear the badge currently.

For now, the’13 Dart will be Chrysler’s only vehicle with GT trim. It carries Chrysler’s recently available 2.4L Tigershark MultiAir II 4-cyl. powertrain that produces 184 hp and 174 lb.-ft. (236 Nm) of torque. A manual transmission is standard; a 6-speed autostick is optional.

Exclusive to the Dart GT are a sport-tuned suspension, light-emitting-diode racetrack taillamps, integrated dual exhaust, 18-in. aluminum wheels and perforated heated Nappa leather seats. The interior also features an 8.4-in. (21-cm) touchscreen and a 7-in. (18-cm) thin-film transistor display. The Dart GT, making its public debut at the North American International Auto Show in Detroit next week, stickers at $20,995 before destination charges.

An emphasis on upper trim levels has been key to Chrysler’s success as of late. The auto maker notched 1.64 million deliveries across all its brands in 2012, with some success credited to gradually steering customers to more option-friendly packages above base models. The Dart offers several trims, including SE, SXT, Rallye, Aero and Limited.

The Dart GT will be joining a number of B- and C-segment performance cars that have entered the market in the last couple of model years, including the Ford Focus ST, Chevrolet Sonic RS and Fiat 500 Abarth.

Chrysler’s Tigershark to Move Outside of Dart
Dec 03, 2012