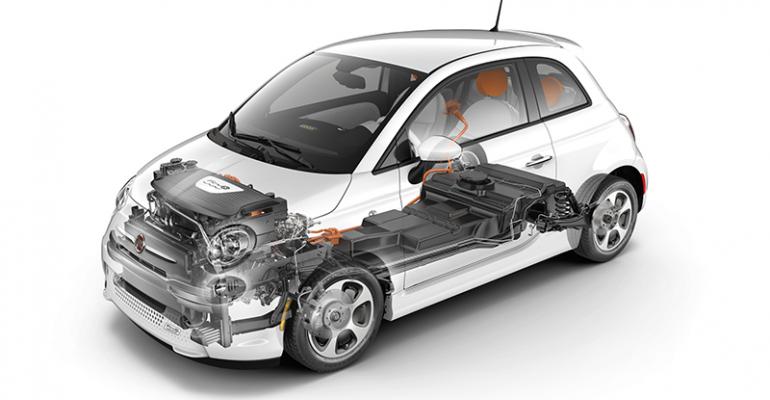 Chrysler Forging Ahead With Electrification Technologies

Chrysler and advanced-energy nonprofit NextEnergy are working on a series of projects that could be ready for production near term.

DETROIT – Chrysler has not been a leader in electrified vehicle technology, offering only the battery-driven Fiat 500e while most other major automakers market a range of hybrids and plug-in hybrids.

However, the 500e soon will be joined by a minivan PHEV due in the ’16 model year, and research with partner NextEnergy may give the automaker a leg up in the electrified-vehicle segment.

Chrysler and advanced-energy nonprofit NextEnergy are working on a series of projects that could be ready for production near term. Tops among those are a new inductive-charging system featuring technology developed by solution provider Qualcomm and a reverse power flow battery setup.

“We launched the 500e and we’re going to do a minivan PHEV,” he tells WardsAuto during a technology demonstration here. “And we have several mild hybrids we’re working on getting ready for production.”

Inductive charging is nothing new, having been offered for years for use with consumer electronics such as smartphones. The technology enables the transfer of electrons directly to a battery via an electrified mat. In the case of an electrified vehicle, an owner simply would have park over the mat to charge his car, negating the need to plug in.

During a demonstration here, the technology works flawlessly, wirelessly recharging an EV at the same level as a 240V power source.

Duhaime does not disclose when Chrysler will begin offering an inductive-charging system for EV owners, but says the technology is production feasible.

“The (power transfer) efficiencies were an issue early on, but I think we have that now, so that’s a key development,” he says. “It’s one of the things you look at with EVs and PHEVs, because for consumers it’s easier to drive over a pad.”

Like inductive charging, reverse-power-flow systems have been demonstrated in the past, but Duhaime says Chrysler has working units undergoing testing. The technology would enable a business with a fleet of EVs to dramatically cut its electric costs by drawing power directly from the vehicles’ batteries rather than the grid.

Gary Gauthier, a NextEnergy technology and market adviser, says utility companies charge businesses demand fees, based on peak energy demand. Demand charges on average account for about 35% of total electricity bills, with the remainder being the actual electricity used.

Gauthier says a small business with a fleet of four EVs could use power stored in the vehicles’ batteries to reduce energy consumption of a building, which would keep the company from reaching peak electricity usage.

NextEnergy ran a test in July 2013 to demonstrate how much money could be saved using such a system. During a hot day, energy usage was about to hit its estimated peak at Detroit-based NextEnergy. By discharging the batteries of four modified Fiat 500es, NextEnergy was able to reduce its power draw from the grid, which dropped its monthly electricity expense $1,200.

“If you increase the number of vehicles to 12 you save $27,000 per year,” he says. “Every building is going to be different. What we’re trying to understand is how variables play with each other to figure out what profiles make the best business case for Chrysler to be able to provide these vehicles to businesses.”

In the next several weeks, Chrysler and NextEnergy will begin conducting further evaluations to test the technology through the four seasons. While the technology likely would be offered first to businesses, it eventually could be provided to retail customers, Duhaime says.

“For home (use) there is no production schedule, but as we work with Qualcomm on applications I think we have the technology to do that,” he says. “Now it’s just a matter of getting the infrastructure in place.”

Duhaime says if reverse power flow and inductive charging hit the market in the near future, it could give Chrysler a competitive advantage in the electrified-vehicle segment.

“I think it depends on the market and consumers,” he says. “If there is pull (from consumers) and we have the technology available, then certainly that would give us an advantage. But that’s speculative at this point.”

Chrysler to Broaden Use of Stop-Start Systems
Jun 24, 2014