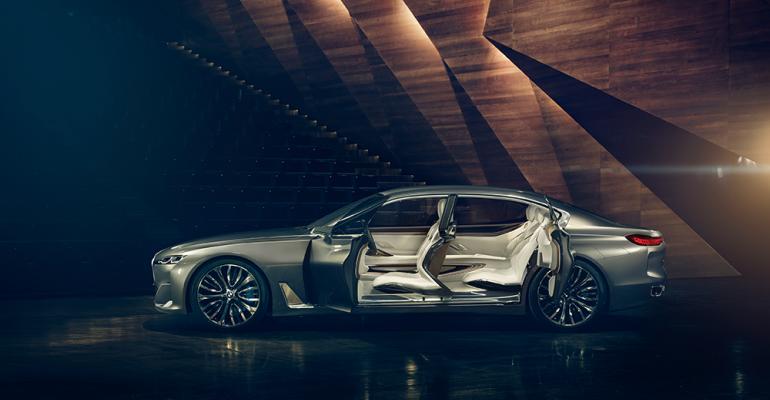 Although officials won&rsquo;t say the concept will be built, it is a safe bet that at least elements of the design will make it on a production car by 2018, likely as BMW&rsquo;s answer to Mercedes&rsquo; upcoming top-of-the-line Maybach S-Class.

BEIJING – BMW’s Vision Future Luxury concept unveiled at the auto show here charts a near-term path for the brand in terms of styling and technology.

An offshoot of the 2013 Gran Lusso Coupe, developed jointly by BMW and Italian design house Pininfarina, the new concept features lightweight construction and an interior that maximizes passenger room through some innovative engineering.

“There are a number of elements in that car, and we will gauge what people say and then we will take a view,” BMW board member Ian Robertson tells Bloomberg of the car’s potential path to production.

Although officials won’t say the concept will be built, it is a safe bet that at least elements of the design will make it on a production car by 2018, likely as BMW’s answer to Mercedes’ upcoming top-of-the-line Maybach S-Class.

The Vision Future Luxury’s key innovation is in its cabin construction, the automaker says, which consists of a multi-layered composite structure, a type of sandwich that combines a carbon-fiber base with a load-bearing outer layer of aluminum for additional strength, topped by wood and then leather as required.

The benefits of carbon fiber can be seen in the construction of the seats, which flow holistically into the load-bearing structure, and the minimalist B-pillars that allow for the wide-opening coach doors that maximize exit and entry ease.

Technology advancements include Vision Head Up Display, which features augmented reality that can direct the driver’s attention to road signs or hazards ahead as needed. There’s also a Touch Command Tablet for the two rear passengers to access vehicle functions and connect with the Internet.

The Vision Future Luxury also gets BMW’s laser lights at in front and organic LED lighting at the rear.