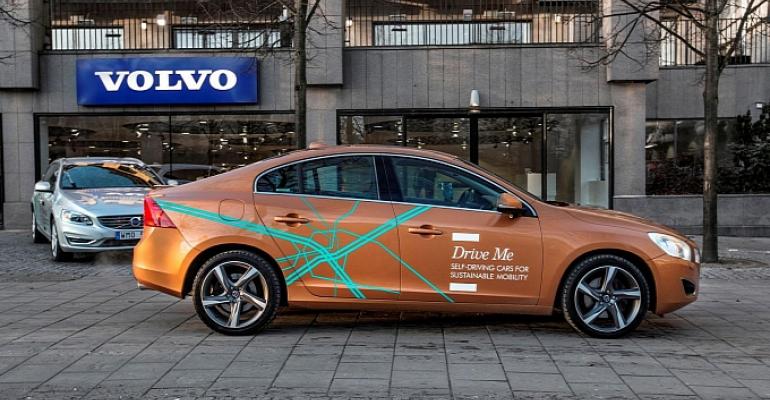 Their goal is to develop the digitally connected superhighways needed to achieve the multibillion-dollar potential from such high-tech vehicles, which range from regular cars with beefed-up GPS to fully driverless models.

In a joint statement, the group (which calls itself an EU Industry Dialogue), highlights the “very significant economic impact” forecast for connected and automated driving; a recent study by the KPMG consultancy estimates €71 billion ($78 billion) by 2030 in the U.K. alone.

But Dialogue members also recognize “strategic challenges to Europe’s ability to implement connectivity and automation in all environments.”

This is why the group has agreed upon three strategic objectives: Prioritizing connectivity, network coverage and reliability; facilitating take-up; and ensuring trust and security.

ECTA spokeswoman Aurélie Bladocha says the Dialogue will use expert working groups “to define the concrete steps to reach these objectives” in meetings starting in early November. There will be another meeting with the European Commission in December and Oettinger is organizing a roundtable in February.

First, the group is looking at what technology could be developed by improving communication and liaison between telecoms and automakers. Second, it will lobby for policy changes by governments and local and regional authorities in areas such as R&D funding or boosting support for fixed electronic infrastructure, for instance in model developments such as “smart cities.” Third, Gropelli says, the group will press for regulatory change.

“For example, connected cars need powerful and ubiquitous broadband networks. Regulation needs to incentivize investment in this field. We should think of telecom networks as the digital highways of the future,” the ETNO spokesman says.

Gropelli adds: “Telcos and automotive manufactures are already working together today to make cars more interactive and safer. Think of Bluetooth integration, emergency calls and smart systems on new cars. But much more can be done: Cars can become the connected hub of the future.”

The new initiative will aim at helping the auto industry anticipate technological change: “We need to facilitate the adoption of innovative technologies for the mass market.”

One reform that could help connected autos thrive is beyond the influence of a regional grouping such as the EU Industry Dialogue, and that is global technical standardization. The G7 group of the world’s seven richest nations has warned automated and connected driving needs safety standards set through a worldwide harmonized regulatory system to realize its potential.

In a joint statement with EU Transport Commissioner Violeta Bulc released last month, the G7 says: “It will not be possible to fully harness this potential, which is of benefit to society as a whole, unless appropriate steps to establish a harmonized regulatory framework are taken to enable the safe deployment of these innovative technologies across national borders.”

The statement also notes, “Fundamental issues regarding the role and obligations of drivers will have to be resolved” and safety will hinge on reliable technologies – “a basic prerequisite for ensuring that the digital mobility revolution is a success in all areas.”

The statement is noteworthy for bringing together the EU, U.S., Canada and Japan, whose technical auto standards often have differed widely.

Didoff, senior project manager for the Viktoria Swedish ICT research institute, a partner in the EU’s i-GAME automated-driving project, tells WardsAuto: “Lawmakers are arguing on what can be considered as ‘safe enough’ to allow automated vehicles on the road. This of course relates to matters around liability and insurance. Some car makers are already claiming full responsibility for accidents – for example, Volvo Cars with the Drive Me project and Google – if occurring in automated mode.

“Different countries have different legal systems and lawmakers argue whether existing laws actually cover the new type of legal issues that will occur with automated vehicles.”

Other disagreements involve the need for a driver’s license in automated vehicles, Didoff says: “If vehicles are automated and manufacturers take responsibility there should be no need for driver’s licenses, some claim. Others have the opinion that the vehicles are so complex that actually extended driver-licenses should be required to understand how to control these complex robots.

“While lawmakers argue, technology advances and soon the legal issues will be the blocker.”

Yet, Didoff says safety is the overwhelming issue: “If systems fail and people have accidents, trust will decline very rapidly, and trust is hard to rebuild.”

The ECTA’s Bladocha adds: “It is true that there were recently some issues of trust and security with cars which were hacked. Connected cars rely on a certain number of different technologies such as Wi-Fi, Bluetooth, 3G or 4G. This is very efficient to improve safety and vehicle performance, but this also means that there is a risk of remote hijacking of the car.”

She says solutions could range from regulatory harmonization to innovation, which for her would require competition in the sector despite the collaboration promoted by the EU Industry Dialogue.

“Competition is part of a virtuous circle,” Bladocha says. “It pushes companies to be more innovative and efficient and offer services at competitive prices, which generates user demand. Demand in turn drives more investment.”

Gropelli offers the same message, albeit looking at competition in international terms: “The main objective is to ensure that Europe keeps its competitive edge. This is why Commissioner Oettinger is supporting the dialogue between EU telcos and car manufacturers. This is a global market that will touch 44 million vehicles by 2030.

“Europe needs to collaborate with partners across the world to make the most of this growth opportunity.”