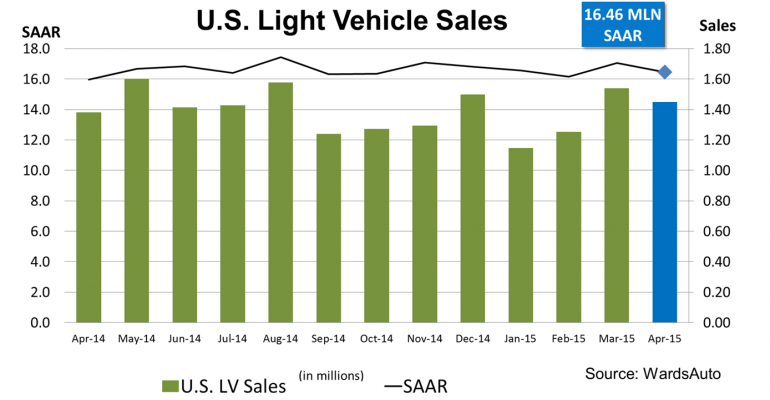 The April market share for CUVs was an any-month high 29.0%, and the 28th consecutive increase over the same year-ago period. &nbsp;

April’s U.S. light-vehicle sales finished at a seasonally adjusted annual rate of 16.4 million units, which was below expectations, but still the highest for the month since 2005.

April’s SAAR was forecast to fall from March’s robust 17.1 million, which was inflated by delayed purchases from January-February, and from fiscal-year-end incentives by some automakers that boosted volume.

Overall, the industry continues to stay away from using fleet deliveries or retail incentives as tools for inducing more volume. Estimated fleet penetration, which has been slowly trending up the past 12 months as commercial demand increases, was not inordinately high.  Incentives, based on initial third-party estimates, were relatively flat with year-ago.

CUVs continued as the basis for the truck sector’s strength. April’s 29.0% market share was an any-month record for CUVs, marking the 28th consecutive month share increased over year-ago, as well as 38 straight months of DSR increases.

All CUV segments increased sales in April from year-ago, with only the Large Luxury segment not posting a double-digit gain. Small CUVs, with the help of new products, increased a whopping 22% over year-ago, and Small Luxury CUVs were up 66%. Small CUVs get a further boost next month when the Honda HR-V hits the market, and again soon after, with the all-new Mazda CX-3 on tap.

Light-truck penetration, and overall LV sales, could have been higher if not for inventory shortages of some hot-selling CUVs. Also, deliveries of large trucks would have been stronger if Ford had full availability of its new F-150 pickup and General Motors could have kept up with current demand for its big SUVs.

Sales of large trucks, including luxury segments, increased 5.5% from year-ago, with share rising to 19.1% from 19.0% in April 2014. While Large Pickup deliveries increased 4.9%, Ford’s F-Series posted the smallest gain among the segment’s competitors, and the Large SUV segment, dominated by GM, fell 13.2% after increases in 12 of the past 13 months.

Enhancing big-truck sales were Large CUVs, up 16%, and Large Vans, up 8%. Goosed by demand (and availability) at GM, Large Luxury SUVs were up 56% and, rounding out the big trucks, Large Luxury CUVs – led by Audi and Infiniti – rose 6%.

Small Pickups, also buoyed by new product at GM, were up 48% in April from year-ago. SUVs, thanks to some weakness in the Middle SUV segment, were up just 2.7%.

Due to a long-term tooling shutdown at FCA US’s minivan plant, severely cutting availability of its Chrysler Town & Country and Dodge Grand Caravan, Small Van sales were down 21% in April from year-ago. Less FCA’s products, small-van sales increased 15.4% from year-ago, thanks mostly to demand for models sold predominantly to commercial customers.