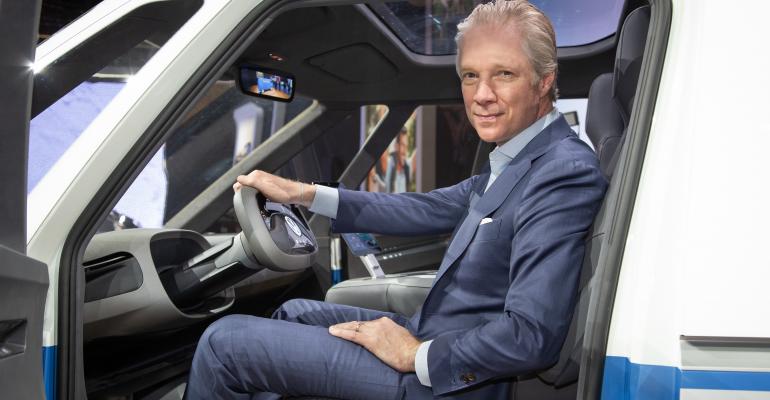 In the game of automotive roulette, one automaker is betting on black and the other on red.

LOS ANGELES – Toyota and Volkswagen are both involved in electric-vehicle development, yet they pursue strikingly different strategies.

VW is going all in with EVs, planning to introduce a cadence of them, from passenger cars to commercial trucks and vans.

Volkswagen says its first new-generation battery-electric vehicle based on the upcoming MEB platform, the I.D. hatchback, will reach the market in 2020 (a year later than originally expected).

The MEB is part of an ambitious electrification effort for Volkswagen Group. The German automaker plans to market 80 full battery-electric vehicles globally by 2025. It targets sales of MEB-based vehicles alone at 1 million units annually by 2025.

It also is investing big in ultra-fast charging networks in Europe and the U.S. as part of the automaker’s diesel-emissions settlement with the U.S. government.

Toyota is betting conservatively on EVs. It is investing in R&D for EVs and other internal-combustion-engine propulsion alternatives, such as fuel-cell systems.

But unlike VW, Toyota has no determined plans to go to market with purely electric-powered vehicles.

Why not? Because it doesn’t see consumer interest in them. At least not now. EVs currently on the market – such as the Nissan Leaf, Chevrolet Bolt and Tesla models – make up only 1.24% of the U.S. vehicle market.

“If it were 24.1% it would be different,” says Jack Hollis, vice president and general manager of Toyota’s U.S. unit.

Were EV consumer demand to grow enough, he says Toyota could jump in relatively quickly and start sending EVs down the assembly lines. That’s because of its ongoing EV research and what it has learned about electrification from its hybrid-vehicle development. The latest addition to its hybrid team is a ’20 Corolla hybrid introduced at the Los Angeles Auto Show.

“We’re moving forward and being prepared,” Hollis says of EVs during an auto show media roundtable. “Right now, people (in the industry) are going all over the place.”

So, in the game of automotive roulette, VW is betting on black and Toyota on red when it comes to EVs.

“We’ll ultimately see who wins,” says Hollis. “That’s why this industry is awesome. “That’s the fun of this industry. I’m betting on Toyota.”

He notes Toyota earlier had twice introduced an electric RAV4 model. The market showed little interest either time, and Toyota pulled the plug on those models.

Neither Toyota customers nor its dealers are clamoring for EVs, Hollis says. “If our dealers felt there was a significant demand, we’d have a lot of electrics on the road today.

“But we don’t want to enter an artificial environment. We shouldn’t be going electric as much as electrification. At this point, there is no need to race to market. Supplying a low-demand market isn’t a good idea.”

After the automaker got busted for rigging diesel-engine emission tests, it ended up paying billions of dollars in fines and restitutions. The scandal put a knife in the heart of VW’s plan to make diesels mainstream.

The company now has shifted its efforts to EVs, as evidenced further by its L.A. auto show debut of a concept EV commercial panel van.

“The future at VW lies with electric and mobility,” says Scott Keogh, the new president and CEO of VW of America.

Also at the show, Audi, one of VW’s luxury brands, staged the world premiere of its all-electric e-tron GT supersports car. It comes with a tagline “Electric Has Gone Audi.”

The BEV is dubbed official as a concept, but head designer Marc Lichte declares, “This car will go to market in two years.”

VW is past the crisis stage of its fraudulent-emissions scandal that began three years ago. But it is still atoning for its sins.

Asked at the auto show if people can trust VW after the diesel debacle, Keogh, replies “Trust needs to be earned. I didn’t create this mess, the employees didn’t and the dealers didn’t. That’s why we’re working hard to fix it.”