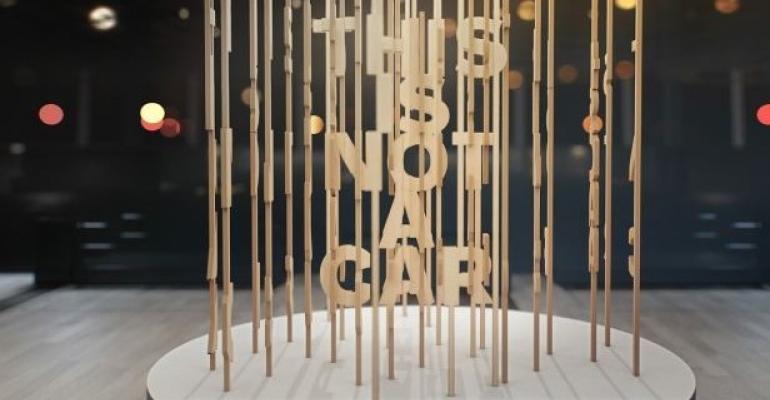 Volvo Cars comes to Automobility LA without displaying a car but instead redefining what a car can be.
Industry News>Auto Shows

Volvo Cars Focuses on Ideas, Not Hardware, in LA

Volvo says cars, the industry and car users’ expectations are changing, and its exhibit at AutoMobility LA reflects these changes.

Volvo Cars proudly proclaims a world first at AutoMobility LA: not a single car on its stand.

Instead, the automaker is using the Los Angeles auto show media days that ended Thursday to demonstrate its vision of redefining what a car can be.

It says that as long as there have been auto shows, the car has always been a centerpiece – on a rotating stage or perhaps covered under a silk sheet.

But Volvo says cars, the industry and car users’ expectations are changing, and its exhibit at AutoMobility LA reflects these changes.

How consumers experience a car brand is more important than chrome, leather or horsepower, Volvo contends. So visitors will look to a central space where they would expect to find a car and instead see the statement: This Is Not A Car.

Mårten Levenstam, responsible for product strategy at Volvo Cars, says by calling the trade show AutoMobility LA, the organizers have recognized the disruption affecting the industry.

“We want to demonstrate that we got the memo and start a conversation about the future of automobility,” he says in a statement.

“Instead of bringing a concept car, we talk about the concept of a car. We will not win the ‘car of the show’ award this year, but we are comfortable with that. Because this is not a car show.”

Volvo is featuring interactive demonstrations of connectivity services, such as in-car delivery, car sharing, its vision for autonomous driving as displayed in the Volvo 360c concept and the Care by Volvo car-subscription service.

Volvo Cars CEO Håkan Samuelsson says the industry is changing: “Rather than just building and selling cars, we will really provide our customers with the freedom to move in a personal, sustainable and safe way.

“We offer our customers access to a car, including new attractive services whenever and wherever they want it.”

Samuelsson says Volvo demonstrates innovative interaction with new types of partners including established tech companies such as Amazon, Google and Nvidia, as well as technology startups.

By the middle of next decade, Volvo says half of its annual car volume will be fully electric, one-third will be autonomous and Volvo will have established more than 5 million direct consumer relationships.