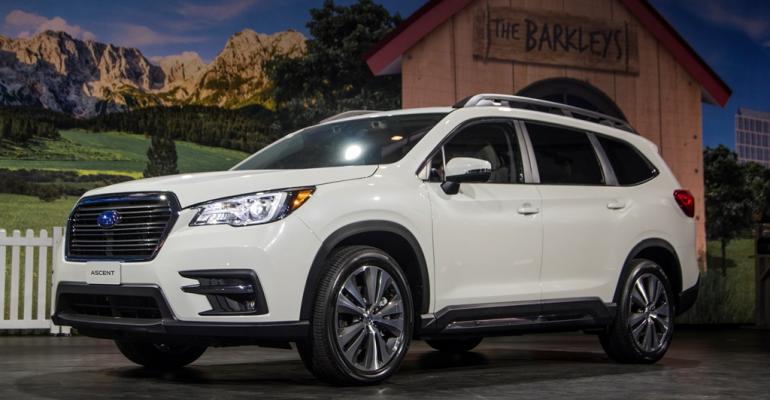 &ldquo;We didn&rsquo;t have a vehicle we could offer to larger families,&rdquo; Subaru of America President Tom Doll says, explaining why the Ascent is coming to market. &ldquo;There was that hole in the doughnut.&rdquo;

LOS ANGELES – Subaru, an automaker that largely made its mark by selling relatively small vehicles, is expanding its lineup with a fullsize SUV.

The 3-row Ascent is the largest vehicle Subaru has ever built. The goal is to snare a part of the market the Japanese automaker has been missing: growing families who need a roomier vehicle than the brand heretofore has offered.

Tom Doll, Subaru of America’s president and chief operating officer, describes the Ascent as a “true 3-row SUV” with seating for seven or up to eight with a bench seat rather than captain’s chairs in the second row.

Speaking at a J.D Power/National Automobile Dealers Assn. automotive conference held in conjunction with the Los Angeles auto show, Doll outlines the rationale for coming to market with a first-of-its-kind vehicle for Subaru.

He disputes a claim that Subaru has been anti-mainstream SUV over the years. He cites the Crosstrek, Outback and Forester as examples. But he acknowledges those tilt toward the small end of the segment. Their appeal mainly is limited to younger owners without children and older empty nesters.

“We didn’t have a vehicle we could offer to larger families,” Doll says, explaining why the Ascent is coming to market. “There was that hole in the doughnut. People couldn’t stay with us when they became parents in growing families.”

The new vehicle is built on the Subaru Global Platform and contains 153.5 cu.-ft. (4,347 L) of interior space and extra-wide rear doors designed for easily getting people and gear in and out.

With a standard symmetrical all-wheel-drive system and a CVT propelled by an all-new 2.4L turbocharged 4-cyl. boxer engine, the Ascent closely follows the tread marks of the Subaru Ascent Concept unveiled in April at the New York auto show, as well as the bulked-up Viziv-7 concept ute shown last year in Los Angeles.

To be built at Subaru’s plant in Lafayette, IN, and sold exclusively in the North American market beginning next summer, the Ascent will be available in base, Premium, Limited and Touring trim packages, with a mid-$30,000 starting price.

The automaker looks to sell an estimated 68,000 units in the first year.

Market research gives Doll high hopes for Subaru’s new king of the road. “Given what customers are telling us about demand, we’re very excited about the Ascent.”

“Subaru now is gaining market relevance,” Doll says, recalling low-volume days when “we had trouble finding retailers to represent us.”

The automaker now has 315 U.S. dealers. The company wants all of them to eventually sell at least 1,000 vehicles a year, he says. “That’s our goal. We would need to increase annual sales to 800,000 vehicles to achieve that.”

It likely won’t be done by slapping on incentives, because Doll loathes them. “I hate incentives. I saw how they didn’t work and didn’t build your brand in the 2000s,” a time when many automakers used hefty and costly financial lures to move the metal.

Even if he were inclined to play the incentives game, Subaru lacks the financial resources to do so, he says.

Doll prefers to call Subaru’s franchisees “retailers” rather than “dealers” in an age of transparency when consumers can readily get wholesale and retail vehicle prices online.

“We recognized a few years ago you are not dealing,” he says. “People today know everything. They know the cost of the vehicles. They know when you are zooming them. So you have to present the product properly.”