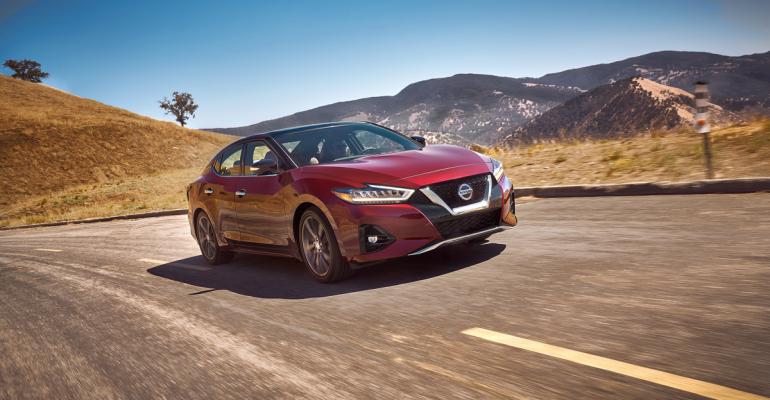 ’19 Nissan Maxima gets even larger “V-Motion” grille, with styling cues that flow into hood and down body.
Industry>Los Angeles Auto Show

Sedan sales are slipping and U.S. automakers are abandoning the segment altogether. But the Japanese stalwarts in the midsize sedan segment are keeping hope alive with recent introductions such as the all-new ’19 Toyota Avalon and ’18 Honda Accord.

At the Los Angeles Auto Show, Nissan showed its commitment to the midsize sedan segment by debuting a refreshed ’19 Nissan Maxima. Nissan calls the Maxima a “four-door sports car” and it arguably boasts the most aggressive styling in the class.

The ’19 Maxima gets an even larger “V-Motion” grille, with styling cues that flow into the hood and down the body. The rear taillamps and rear fascia also are redesigned, with integrated quad-tip exhaust finishers. Inside, Nissan offers updated trim finishes and materials and available diamond-quilted Rakuda Tan semi-aniline leather.

The updates don’t extend to the powertrain. The new Maxima carries over the existing 3.5L V-6 that produces 300 hp and 261 lb.-ft. (354 Nm) of torque. Power is directed to the front wheels via a continuously variable transmission.

The ’19 Maxima gets the Nissan Safety Shield 360 suite of driver assists, although it’s standard only on the top Platinum trim level and is optional on the Maxima SR. It includes forward collision warning with autonomous emergency braking, lane departure warning, blindspot monitoring, rear cross-traffic alert and automatic high beams.

The Maxima also is available with Nissan’s Around View Monitor 360-degree camera system, adaptive cruise control and traffic sign recognition. A driver-attention monitor is standard on all trim levels, and for 2019 the Maxima also gets a Rear Door Alert feature that alerts drivers to the presence of children or pets in the back seat.

The ’19 Maxima will arrive in showrooms in mid-December and Nissan hasn’t yet announced pricing. But it likely won’t rise much beyond that of the ’18 Maxima, which starts at $33,270 and increases to $40,940 for the top-of-the-line Platinum trim.

While the Maxima and its sedan competitors continue to be endangered by increasing CUV sales, Nissan hopes the mild refresh of its nearly 40-year-old model will keep it in consideration by car shoppers.

“Maxima checks all the boxes for sports sedan enthusiasts,” he adds, “and now, with the refreshed appearance, refined interior and enhanced safety and security technology, there are even more reasons that Maxima stands out from every other midsize sedan on the market today.”

If it still doesn’t win over consumers set on a crossover, Nissan also released a new Murano midsize CUV at the LA Auto Show.