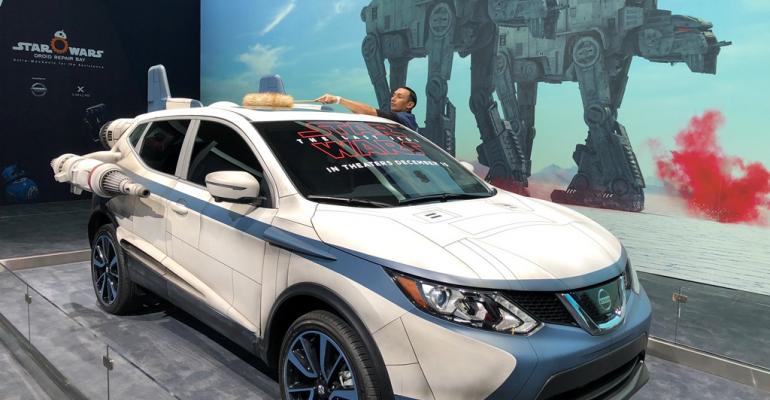 Nissan is extending its tie-in with a popular movie franchise across the automaker&rsquo;s entire galaxy, including 1,100 U.S. retail points. &nbsp;

LOS ANGELES – It’s beginning to look a lot like Christmas for Nissan will resemble a fictional galactic battlefield.

Nissan did a previous promotion with the “Star Wars” franchise, but that was primarily a corporate campaign focused on only the Rogue SUV.

Now, the automaker is extending its tie-in to the entire Nissan galaxy, including 1,100 U.S. dealers and the other vehicles in its lineup.

“We thought, ‘Can we do it for more than just the Rogue and are there more opportunities to draw “Star Wars” fans to dealerships?’” says Tucker. After getting  feedback from dealers, the answer was “Yes.”

“Families will have plenty to do,” Tucker vows. But the effort extends beyond the fun of it all.

“It’s not just about window dressing and selfie moments,” he says during a presentation, “How to Drive Consumer Impact with Fully Integrated Marketing,” at a J.D. Power/National Automobile Dealers Assn. conference held in conjunction with the Los Angeles auto show.

Tucker formerly worked for Disney and Frito-Lay, a snack-food company that tracked sales on a daily basis, not just monthly, he notes. He calls Nissan’s new “Star Wars” campaign “retail theater at dealerships.”