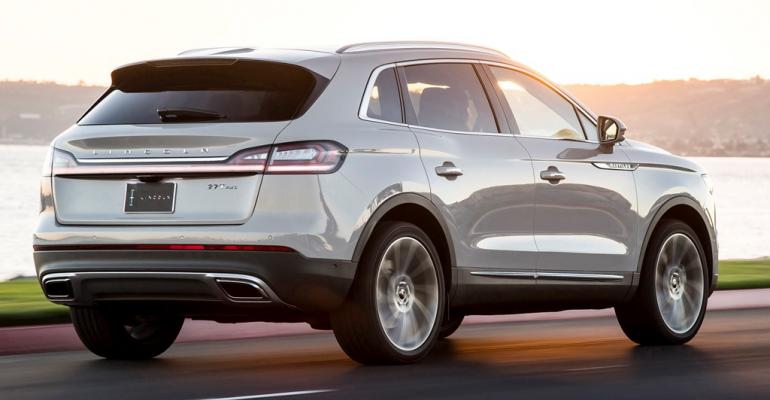 MKX Out, Nautilus In as Lincoln’s Midsize SUV

LOS ANGELES – The Lincoln midsize SUV formerly known as the MKX debuts here with a refreshed look and a new moniker that further indicates Ford’s luxury unit is dropping its alphabetic nomenclature, vehicle-by-vehicle.

“We’re excited to add Nautilus to our Lincoln family of luxury SUVs, along with a new name that better reflects the ideas and attitudes of our clients,” Lincoln President Kumar Galhotra says at the vehicle’s debut in conjunction with the Los Angeles auto show.

Lincoln bills the ’19 Nautilus as pairing performance with driver-assist technologies, such as an all-new lane-centering feature that helps subtly maintain the vehicle’s lane position and an auto-hold that frees the driver from holding the brake in stop-and-go traffic.

“We never go for technology for the sake of technology,” Galhotra tells journalists as the vehicle is unveiled on the rooftop terrace of a nine-story hotel.

“The technology in this vehicle is thoughtful and purposeful,” he adds. “We focused on bringing in innovative features to make each drive effortless for our clients.”

The Nautilus’ turbocharged engine offerings are carryovers from the MKX: a standard 245-hp 2.0L 4-cyl. and an optional direct-injection 2.7L V-6 that delivers 335 hp. An 8-speed automatic transmission replaces a 6-speed for both engines.

Galhotra says Lincoln sales through October have been the brand’s strongest 10 months in a decade, fueled largely by its growing popularity in China.

Galhotra cites predictions indicating SUVs will make up 70% of the Chinese auto market by 2024.

Lincoln last year came out with the Continental, replacing the MKS fullsize sedan and developed largely with the Chinese market in mind. Replacing the MKX with the Nautilus name was done in part because numerical or alphabetic vehicle designations tend to put off Chinese consumers, says Robert Parker, Lincoln’s director-global marketing, sales and service.

“Particularly in China, (letter-naming vehicles) was a challenge,” he says. “We discovered with the Continental that people like having names for cars, not letters. “I worked three years in China and names like the Lincoln Navigator (the brand’s fullsize SUV) and Continental are names they can readily understand. ”

That is true to an extent elsewhere, Parker adds. He recalls riding on an airport shuttle bus in Detroit with a couple arguing about whether the name of the car one of them owned was a Lincoln MKZ or an MKC.

He indicates future Lincolns will bear names “that don’t get caught up in the alphabet challenge.”

That said, he cites an automotive axiom: “The car makes the name, the name doesn’t make the car.”

How do you make a vehicle warm and human?

Galhotra says: “You do it by having a car that welcomes you (with various ambient lighting), seats that remove fatigue, rather than cause it.” Available in the Nautilus are 22-way Ultra Comfort seats developed with input from orthopedic surgeons and an audio system that simulates a concert hall (13-speaker and 19-speaker Revel audio systems are offered in the SUV).

The Nautilus will be available at Lincoln dealerships next spring.