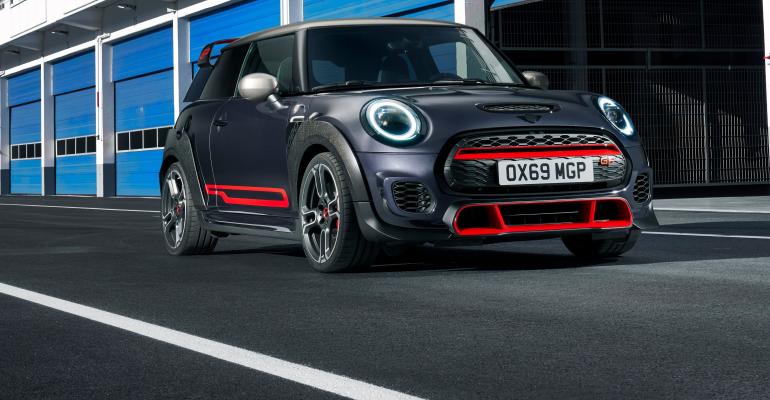 Mini introduces the John Cooper Works GP, described by the BMW-owned brand as its fastest-ever street-legal model, at the Los Angeles auto show.

Model-specific engine modifications include a reinforced crankshaft with a larger-diameter main bearing, specially designed pistons, bushless connecting rods and a new torsional vibration damper. The newly developed turbocharger is integrated into the exhaust manifold and fitted with a divert-air valve that helps optimize response.

During test drives, the JCW GP completed a lap of the Nordschleife race track at Nürburgring, Germany, in less than eight minutes – almost half a minute faster than its John Cooper Works predecessor, Mini says.

This updated 4-cyl. – which BMW says is its most powerful production direct-injected 2.0L turbo – also appears in Mini’s 301-hp JCW all-wheel-drive Countryman and Clubman and the 302-hp BMW X2 M35i.

The X2 is being evaluated currently as part of the 2020 Wards 10 Best Engines & Propulsion Systems competition. Winners will be announced next month.

Standard on the front-wheel-drive John Cooper Works GP is a model-specific 8-speed Steptronic transmission complete with integrated mechanical differential lock for the front wheels. The transmission is operated via an electronic gear selector switch, with shift paddles on the steering wheel allowing manual gear selection.

A new split-cooling valve allows the crankcase cooling system to be temporarily shut off to optimize the engine’s warm-up response. The transmission also has a separate cooling circuit.

The exhaust system is specifically designed to create what Mini calls emotionally striking sound production ranging from a “restrained, sonorous sound” at low speed to a sound “inspired by motor racing” under full load.

The new JCW GP has design features that significantly contribute to the car’s stability and controllability even in highly dynamic situations. The body primarily optimizes the car’s aerodynamic balance and the targeted supply of cooling air to the drive units and brake system, Mini says. The large roof spoiler with double-wing contours, the front apron surround known as the Blackband and the front spoiler lip are coordinated to reduce lift.

The large, flared wheel arch trims are manufactured with a material combination used for the first time by BMW Group consisting of a thermoplastic substructure and an outer shell made of carbon-fiber-reinforced plastic. The raw material for the outer shells is recycled from the production of the BMW i3 and BMW i8. 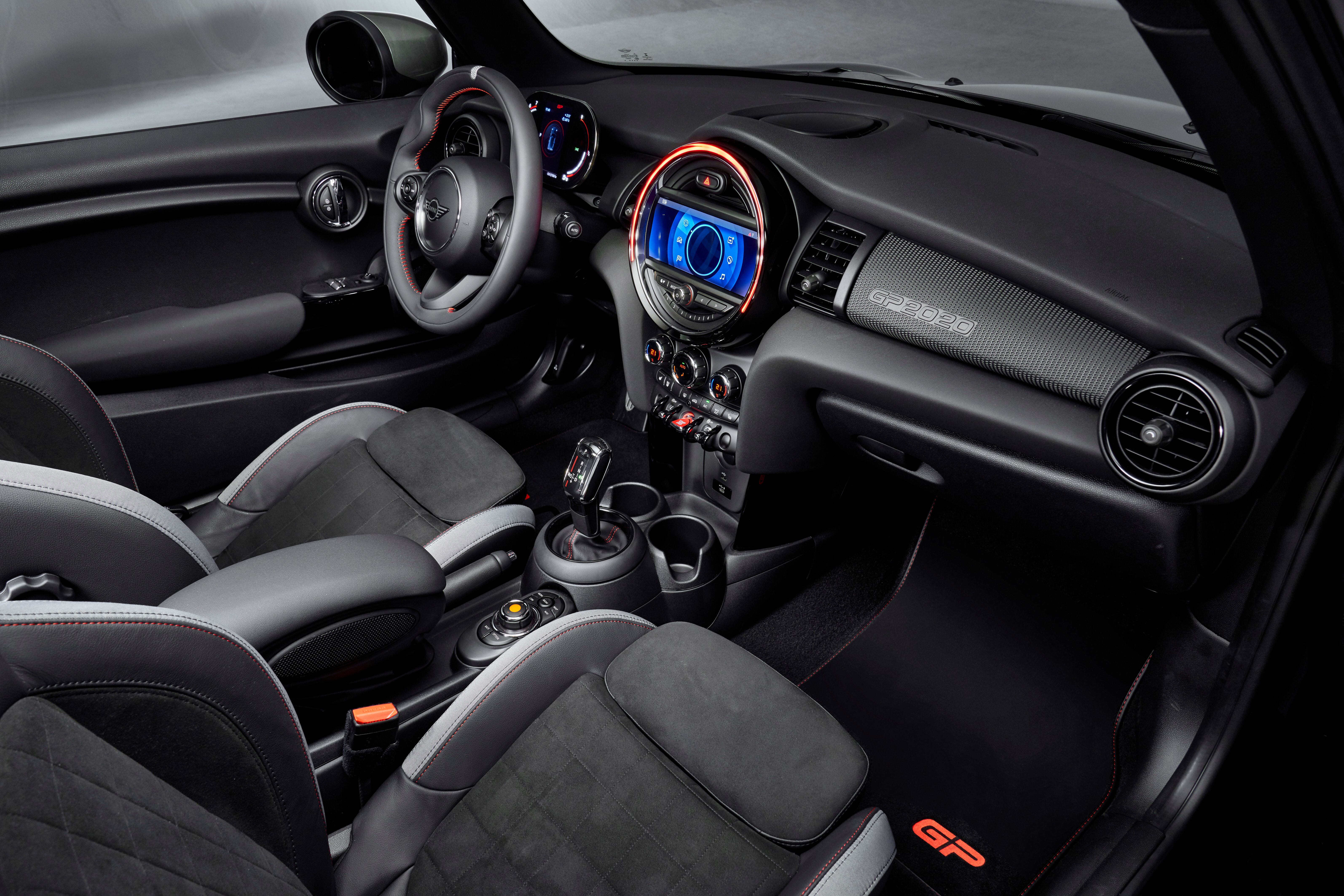 Racing Grey Metallic is the only exterior paint color available for the John Cooper Works GP, while the roof and exterior mirror caps are finished in contrasting Melting Silver metallic. A crossmember on the hexagonal radiator grille, the lower air intake inserts and the inside of the roof spoiler are finished in high-gloss Chili Red.

In an otherwise dark cockpit (above, left), color accentuations are provided by red GP logos on the floormats, matching double stripes on the gear selector and the Chili Red-painted aluminum cross-brace – designed to prevent cargo from slipping forward during sudden braking – behind the seats.

Options for the JCW GP include automatic climate control, the Connected Navigation Plus package, which includes wireless charging, and an alarm system. The standard Connected Media system displays model-specific information on a 6.5-in. (16.5-cm) screen.

Mini says it will produce 3,000 units of the John Cooper Works GP at its Oxford, U.K. plant, with global deliveries beginning in March. Pricing has not been announced.

– with Greg Kable in Los Angeles