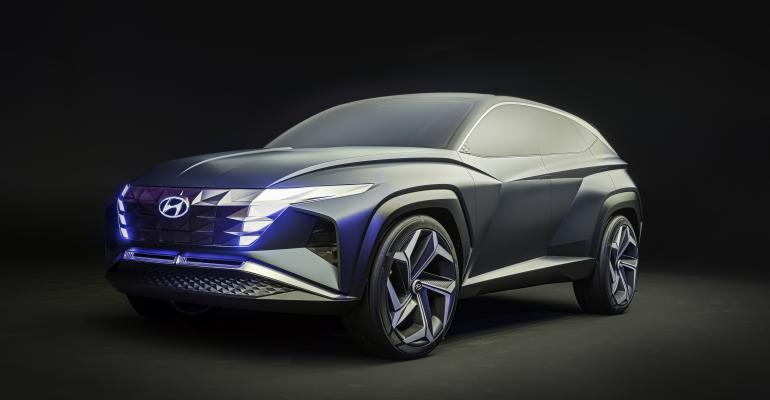 The Korean automaker debuts a PHEV CUV concept and its green-car trio gets new grilles and wheels, plus more range for the BEV.

The Vision T PHEV likely hints at a production model as the automaker has a goal to offer 13 new partial or fully electrified models by 2022, up from just four today (Ioniq, Sonata, Kona and Nexo). Seven of the future models will be CUVs and six will be sedans.

No details beyond design characteristics and dimensions are given for the concept. Its overall length of 181.5 ins. (4,610 mm) places it between Hyundai’s current production versions of the Tucson and Santa Fe midsize CUV.

The Vision T is the seventh concept from the Hyundai Design Center to wear a “sensuous sportiness” design language and is based on a vision of “the new urban adventurer SUV design direction,” the automaker says.

It has a long hood, level roofline, long wheelbase and short overhangs to reflect forward motion.

Parametric Fantasy and Transcendent Connectivity are sub-themes. All parametric surfaces are connected from the body to either light or trim features, Hyundai says, while a parametric air shutter adjusts for both aerodynamics and appearance. If the vehicle is stopped the grille is closed (pic below), but while the vehicle is moving the individual cells of the grille move in a prescribed sequence. 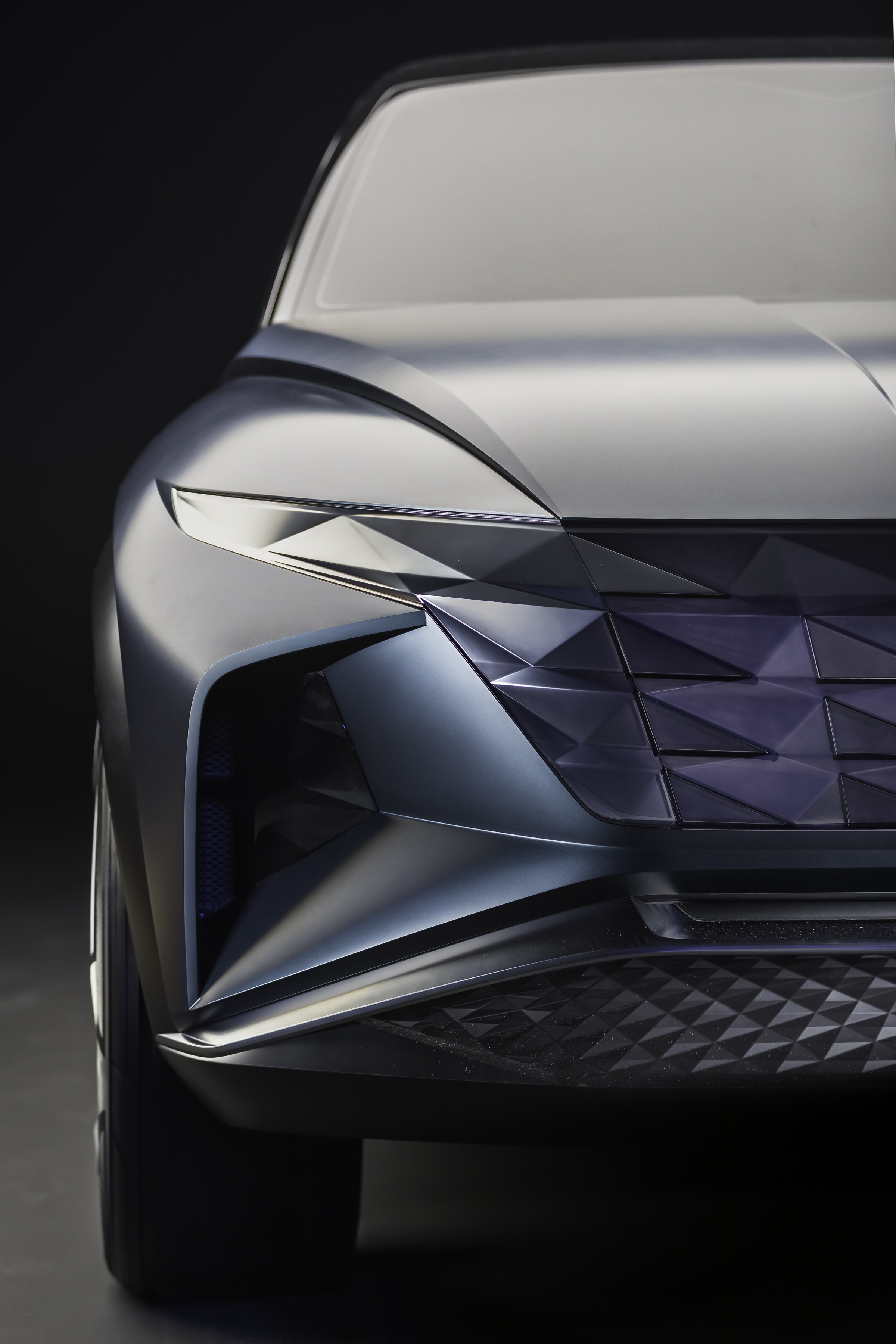 Distinctive sequence lighting appears throughout the vehicle, painted matte green and with wheels finished in satin chrome and matte gray.

Besides the usual styling and feature updates that come in a refresh, the BEV version gets output and range improvements.

The Ioniq BEV, officially called the Ioniq Electric, sees its EPA-estimated range grow substantially, from 124 miles (200 km) in ’19 to 170 miles (274 km), making it more of a midrange BEV than a short-range model. That’s also slightly higher than was extrapolated for U.S. range when Hyundai announced the Korean version of the car earlier this year.

The Bolt has a larger battery pack than the Ioniq Electric, a 66-kWh unit, although the Ioniq’s grows for ’20, with a 38.3-kWh pack replacing a 28-kWh pack in the outgoing model. Both the Bolt and Ioniq packs use lithium-ion cells from LG Chem.

Because of its larger battery pack, the Ioniq Electric’s EPA-rated efficiency drops from 136 MPGe in ’19 to 133 MPGe for ’20. That ties it with the Tesla Model 3 for miles-per-gallon equivalent fuel economy, but still keeps it ahead of Hyundai’s own Kona Electric CUV (120 MPGe) and the ’20 Bolt (118 MPGe).

Like the Kona, the Ioniq can charge at higher speeds, with its pack able to reach 80% full on a 100-kW Level 3 DC fast charger in 54 minutes. On a slower 50-kW charger the time to 80% full is 57 minutes. Non-Tesla chargers producing 100 kW still are rare in the U.S., although Electrify America and EVgo have opened some.

Output and fuel-economy specifications for the PHEV and hybrid variants of the Ioniq remain the same as in ’19. The PHEV gets 52 mpg (4.5 L/100 km) combined and has a 119 MPGe while the hybrid can achieve 58 mpg (4.1 L/100 km) combined, which Hyundai touts as still the best combined fuel economy of any non-plug-in electrified vehicle in the U.S., including Toyota’s Prius hybrid.

Feature and styling changes for ’20 Ioniqs include LED headlamps and daytime running lights, as well as tweaked grilles and wheels.

The Ioniq BEV’s solid “aluminum mask” grille (pic below) goes from a flush, flat surface to having a simulated mesh design, with recessed areas to the left and right of the Hyundai logo.

The hybrid and PHEV Ioniqs switch from a horizontal-bar grille design to a crosshatch “chrome mesh”-style grille.

Power-folding side mirrors are optional on the vehicles, while heated mirrors are standard on the PHEV and BEV.

Front and rear bumpers have been updated, as have bottom and center bumper moldings in the rear of the vehicles.

The interior receives a more thorough update, the most obvious change being bigger touchscreens on the vehicles’ center stacks.

Switchgear and fonts are updated as well, with the entire instrument panel lower than before for better ergonomics and outward vision, Mike O’Brien, vice president-product planning for Hyundai Motor America says Nov. 7 at a Michigan media event.

O’Brien is hopeful that Hyundai will increase sales of all three, notably the Ioniq Electric as Maritz surveys show a 5% increase in those considering electric powertrains in their next vehicle from 2016 to 2019. He says this is good news as BEV buyers tend to be wealthier and more educated than industry average.

The Ioniq lineup is having its best sales year yet, Wards Intelligence data shows, with the 16,915 delivered through October outpacing full-year 2017 and 2018 sales of 11,197 and 15,076, respectively. Not surprisingly the hybrid has been the best-seller, with 14,165 deliveries this year. Hyundai has sold 852 BEVs and 1,898 PHEVs in January-October, with both figures all-time best results. Still, the Ioniq hybrid is far behind the best-selling hybrid in the U.S. this year, the Toyota RAV4, which tallied 72,341 sales through October.

Hybrid and PHEV variants of the ’20 Ioniq went into production in September at Hyundai’s Ulsan, South Korea, plant, while BEV builds commenced in October. The vehicles are expected to arrive at U.S. Hyundai dealers this month, although the Ioniq Electric remains largely a California-only model due to demand there and the state’s strict emissions rules. Hyundai has said its BEV models can be ordered at any Hyundai U.S. dealer, however.

In non-green-vehicle news, the automaker also displays on its L.A. show stage the RM19 Racing Midship sports coupe prototype (pic below), fitted with a 390-hp turbocharged and direct-injected 2.0L. RM19, able to go from 0-60 mph (100 km/h) in less than four seconds, is expected to serve as a “development platform for future N brand products, including a potential brand-halo car,” Hyundai says, adding its recent partnership with Rimac Automobili could portend an electrified variant.