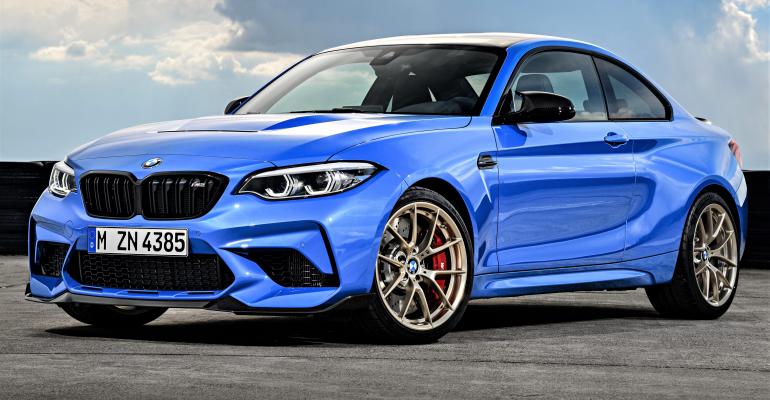 The powered-up coupe, revealed ahead of a planned public debut at the upcoming 2019 Los Angeles auto show, goes into production next March with volumes capped at 2,200 units.

BMW’s M performance division is sending the first-generation M2 off on a high with the introduction of a new, limited-edition CS model.

The powered-up coupe, revealed ahead of a planned public debut at the upcoming 2019 Los Angeles auto show, goes into production next March with volumes capped at 2,200 units. North American deliveries begin in April 2020.

Further changes  to increase downforce include a new splitter element on the lower edge of the front bumper, a trunklid spoiler and multichannel diffuser – all made from carbon fiber.

Also included as standard are new lightweight 19-in. forged aluminum wheels in either a Jet Black or Matte Gold finish.

Despite the weight-saving measures, the curb weight of the M2 CS is 3,417 lbs. (1,551 kg) the same as that of the M2 Competition in standard 6-speed manual guise, BMW says.

Power for the M2 CS comes from a reworked version of BMW M division’s S55 engine that uses a redesigned dual-branch exhaust system with twin electrically controlled flaps for added acoustic qualities. The twin-turbocharged 3.0L gasoline I-6 runs the same state of tune as that used by the M4 Competition, developing 444 hp at 6,250 rpm. This 40-hp increase on the M2 Competition launched in 2018 gives the new M2 CS a weight-to-power ratio of 7.7 lbs. (3.5 kg) per hp.

The increased reserves are channeled through either a standard 6-speed manual or optional 7-speed dual-clutch gearbox, both using a 3.46:1 final drive, and an electronically controlled Active M-differential.

By comparison, the 404-hp M2 Competition boasts an official 0-62 mph time of 4.4 seconds in manual guise.

Inside, the M2 CS receives a carbon-fiber center console that is claimed to weigh less than half of the M2 Competition’s plastic console, as well as M Sport seats from the M4 CS.