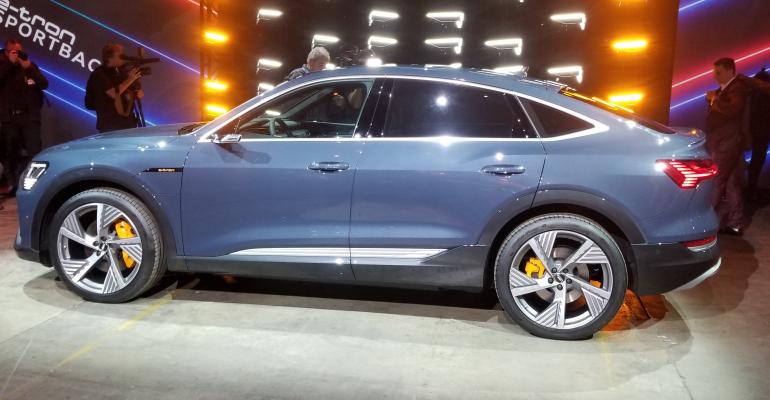 Built on the same platform as the e-tron, a 4-door sedan, the Sportback will have up to 300kW of power and range of up to 277 miles.

“The story of our commitment to electrification has just started,” Marc Lichte, Audi head of design, tells assembled journalists, dealers and Audi enthusiasts.

The 5-door Sportback e-tron offers “SUV style with the aesthetic of a coupe,” he says.

The e-tron Sportback will come in two trim levels, Premium Plus and Prestige. There likely will be a special launch edition package as well, as there was with the e-tron, Mark Dahncke, director of communications for Audi of America, tells Wards.

It will be sold in all 50 states. “It is not a compliance model,” Dahncke adds. Compliance cars are models built to meet zero-emissions quotas in California and some other states. They are produced in low volumes and generally not sold nationwide.

With the e-tron Sportback, Audi is following the same plan as with the Audi A5 Sportback model, he says. It was a derivative of an existing model. Rather than cannibalize sales of the A4, however, the Sportback version is meant to attract a different type of customer.

“The e-tron Sportback is not lost sales,” Dahncke says. “It is added business.”

Pricing for the e-tron Sportback has not been announced, but it will be more expensive than the e-tron because the Sportback is bigger, he says. The e-tron starts at $74,800.

Demand for the e-tron Sportback likely will be smaller than the e-tron’s U.S. sales of 500 units a month, Dahncke says, but adds the new BEV will be a model that “speaks to a certain desirable demographic.”

Audi expects buyers of the e-tron Sportback to be different than the traditional e-tron buyer. “They choose a car that represents their personality more closely,” Dahncke says. “It adds to them being more dynamic in character, more focused on performance and making a statement.”

The new BEV appealed to Sven, a wealthy Canadian businessman and owner of two e-trons who declined to give his surname. “I think it is beautiful,” he says at the Los Angeles launch. “I am definitely going to have to have the Sportback instead of my other models. It is much cooler-looking.”

Michelle Primm, managing director of the Cascade Auto Group in Cuyahoga Falls, OH, also was at the Audi event. She has one Audi franchise.

“It’s beautiful,” Primm says of the e-tron Sportback. “Yes, there is a market for it, but I don’t know how big.”

Audi will launch two more BEVs in the next two years. The Q4 will be an entry-level SUV built on Volkswagen’s MEB platform. The e-tron GT will be built on the same platform as the Porsche Taycan.

Dahncke says the brand also will launch three plug-in hybrid electric vehicles based on existing models in the coming months. The Q5e and the A8e will be released in first-quarter 2020 and the A7e by summer.