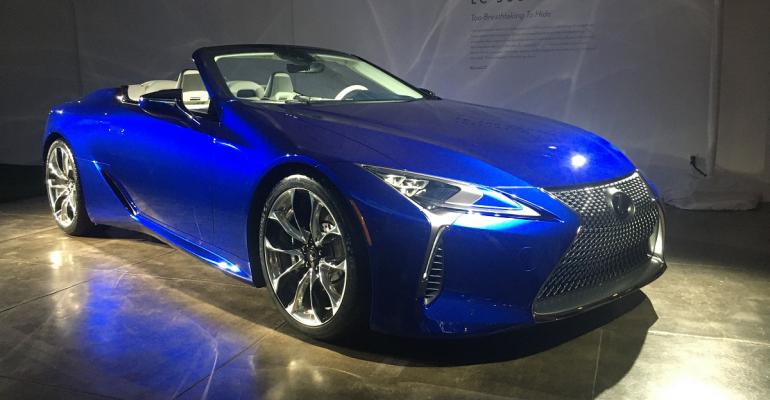 We were smitten when we test drove the 471 hp, V-8-powered Lexus LC 500 nearly three years ago at a media event in Seville, Spain. We came away impressed with the car’s hot-as-Hades performance, sexy sheet metal and award-winning interior – and a brush with the local policia.

Perhaps the only thing that could have made our experience behind the wheel of the LC 500 better was being able to drop the top to let in the Spanish sunshine. With the unveiling of the ’21 Lexus LC 500 Convertible at the 2019 Los Angeles auto show, the appeal of the luxury brand’s performance flagship is even brighter and has us longing for next summer, which is when it will go on sale.

The LC Convertible’s ragtop mimics the coupe’s low-slung roofline and it uses a folding mechanism that includes a tonneau cover when tucked away. Lexus says the design negates gobbling up of trunk and cabin space caused by a bulkier hard top and lowers overall weight.

The four-layer soft top, available in black or beige, is designed so the supporting frame isn’t visible through the fabric, while the material optimizes structural tension to reduce wrinkling and increase sound insulation. The roof can be opened or closed while driving at speeds up to 31 mph (49 km/h) and can open in around 15 seconds and close in around 16.

Lexus says the vehicle’s designers used “computer-aided engineering analysis and real-world driving evaluation to match the driving qualities of its coupe counterpart” and enhanced chassis rigidity by adding and relocating several structural components. The suspension also was tuned to balance the weight variation between the coupe and convertible.

What hasn’t changed is the impressive front-engine, rear-wheel-drive performance provided by the naturally aspirated, direct-injection 5.0L V-8 rated at 471 hp and 398 lb.-ft. (539 Nm) of torque mated to a 10-speed automatic transmission.

To allow drivers to drop the top year-round, the Lexus Climate Concierge’s Upper Body Heating feature automatically manages the HVAC, seat heaters, neck heaters and steering-wheel heater to keep the cabin at an ideal temperature whether the top is up or down. The HVAC system even directs warm or cold air to the back of the driver’s hands when gripping the steering wheel. 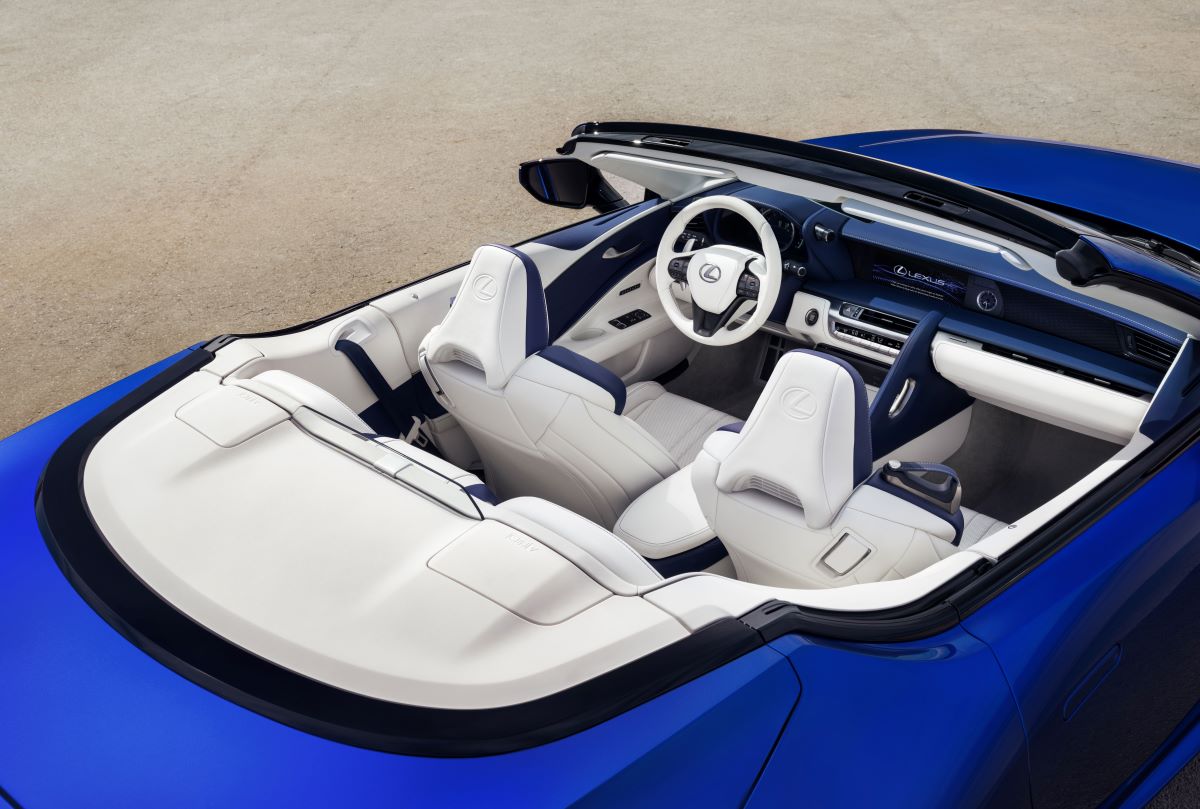 To make sure the ride isn’t too quiet and the LC Convertible’s lusty V-8 roar can be heard above wind and road noise, a system similar to one in the Lexus LFA ports exhaust sounds into the cabin. A computer-controlled valve also balances exhaust back-pressure and therefore exhaust tone and volume at higher engine speeds.

While the LC 500 Convertible gets the same infotainment systems and amenities as the coupe, including a 10.3-in. (26-cm) split-screen display and Apple CarPlay, it also adds Android Auto. Amazon Alexa capability via the Lexus+Alexa app lets owners access functions such as audiobooks, Amazon Music, weather info, news and more via voice and also control compatible smart-home devices.

The LC Convertible will come standard with Lexus Safety System+ that includes a full complement of driver assists, while active roll bars deploy when a rollover is detected. When not deployed, the roll bars are hidden from view to retain the convertible’s svelte silhouette.

The version of the LC 500 Convertible unveiled in Los Angeles is the Inspiration Series, a special edition limited to 100 units and offered in Structural Blue with white semi-aniline leather interior trim, a unique blue top, chrome 21-in. wheels and gray headlamp, side intake and taillamp accents.

If you can’t wait until next summer  to own the new ’21 LC 500 Convertible, Lexus will auction one off Jan. 17, 2020, at Barrett-Jackson in Scottsdale, AZ, with all funds donated to charity. The one-off Structural Blue LC Convertible includes unique features not found on any other Inspiration Series convertible.

One is famed former racecar driver Scott Pruett, who works with Lexus as a consultant and helped with on-road testing and tuning of the’21 LC 500 Convertible. “It’s been fun for me to be engaged with not just the coupe but also the convertible,” says Pruett.

We bet. And we look forward to getting behind the wheel and dropping the top on the ’21 LC 500 Convertible – whether in Spain or Southfield.