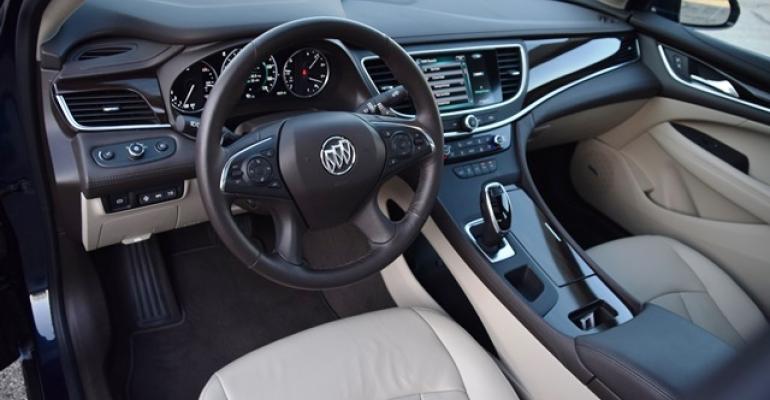 The new LaCrosse in many ways recalls old-school Buicks. It&rsquo;s a long, wide sedan like the land yachts of its heyday, so the interior boasts loads of shoulder, leg and hip room.

American consumers may still doubt whether that’s a Buick, but WardsAuto editors are convinced that, yes, the century-old General Motors unit has genuinely remade itself into a contemporary premium brand worthy of a closer look from import-leaning buyers.

The latest example of Buick’s renaissance comes in the ’17 LaCrosse large sedan, which earns 2017 Wards 10 Best Interiors honors for outstanding connectivity, superb advanced-safety technology, spaciousness, comfort and a design execution unseen from the brand in many decades.

“There’s a stylish element to this Buick that I’ve never seen before in my lifetime,” one judge raves. Another judge calls the design beautiful and classy. “The lines are so simple and fresh.”

Buick has been on the road back to relevancy in the U.S. market after many years of playing second, third or fourth fiddle to premium imports, although popular opinion continues to trail reality. So much so, in fact, the folks at Buick have turned the tables with a lighthearted marketing campaign correcting non-believers with the tagline, “Yes, that’s a Buick.”

But the funny thing is the new LaCrosse in many ways recalls old-school Buicks. It’s a long, wide sedan like the land yachts of its heyday, so the interior boasts loads of shoulder, leg and hip room in both the first and second rows. The latter is absolutely cavernous.

At the same time, a horizontally oriented design theme up front maintains a close connection between the driver and passenger, while an upper dashboard line wraps occupants to create an intimate feel.

The frameless, 8-in. (20-cm) IntelliLink infotainment screen, which is home to useful connectivity items such as an available OnStar 4G LTE wireless hotspot and Apple CarPlay and Android Auto, sits high atop the center stack for ease-of-use.

“Outstanding user experience and phone pairing,” one judge says. “Everything is fast and intuitive.”

“It all works flawlessly,” marvels one judge, while another exclaims, “Yelled at me for not having my eyes one the road!”

But WardsAuto editors especially are captivated by the LaCrosse’s contrasting color palette of light neutral and dark brown with generous wood, nickel and chrome accents. Soft but supportive leather seats feature massage functions for the driver and front passenger, while bucket-like rear seats snugly hold those occupants in place.

Fit-and-finish was as good as any entry in the competition this year, and the car’s noise and vibration was so effectively attenuated its stop-start system and windshield wipers were imperceptible. Cool blue ambient lighting also caught the judges’ attention.

The large-sedan segment is not nearly as popular as it used to be and buyers still may shake their heads at Buick, but the LaCrosse certainly has made believers out of us.