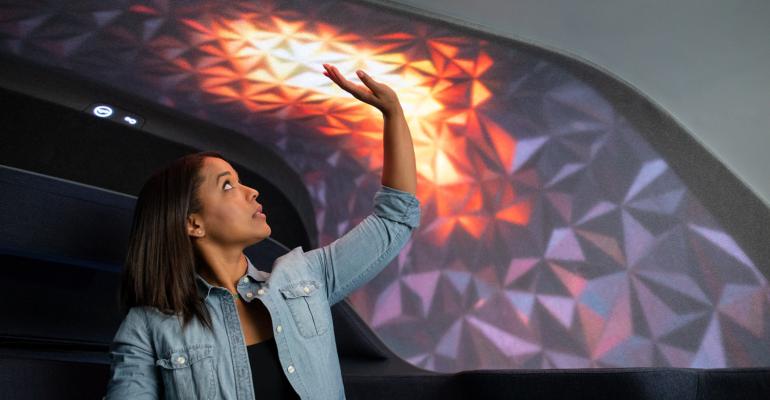 The interior supplier shows off its future vision of a ride-shared vehicle that aims to both engage and de-stress its passengers.

NOVI, MI – Interior supplier Yanfeng is showing the industry the interior possibilities of an autonomous vehicle for use in a mobility fleet.

Mobility-as-a-service, vehicles that are ride-hailed or ride-shared, is projected to take off once Level 5 (fully autonomous vehicles) come to fruition, removing the cost of the driver.

The vehicles in those fleets will have unique interior requirements in contrast to those of personally owned vehicles.

“We’ve become convinced that (using a vehicle for minutes and hours vs. years) is a significant design change, not just for us as a supplier, but for the industry, and the idea of mobility-as-a-service, that’s coming,” Jeff Stout, executive director-innovation and new mobility for Yanfeng, tells Wards at the supplier’s Detroit-area U.S. headquarters. “If the automaker today is selling a brand, that’s not going to be a thing 10 years from now, so how do we help them make that turn to mobility-as-a-service?”

Yanfeng recently showed off to media its XiM20 concept autonomous-vehicle interior for mobility fleets. The interior, housed in a cube-like shell, is roughly fitted for five passengers and has two distinct zones dictated by customer research. 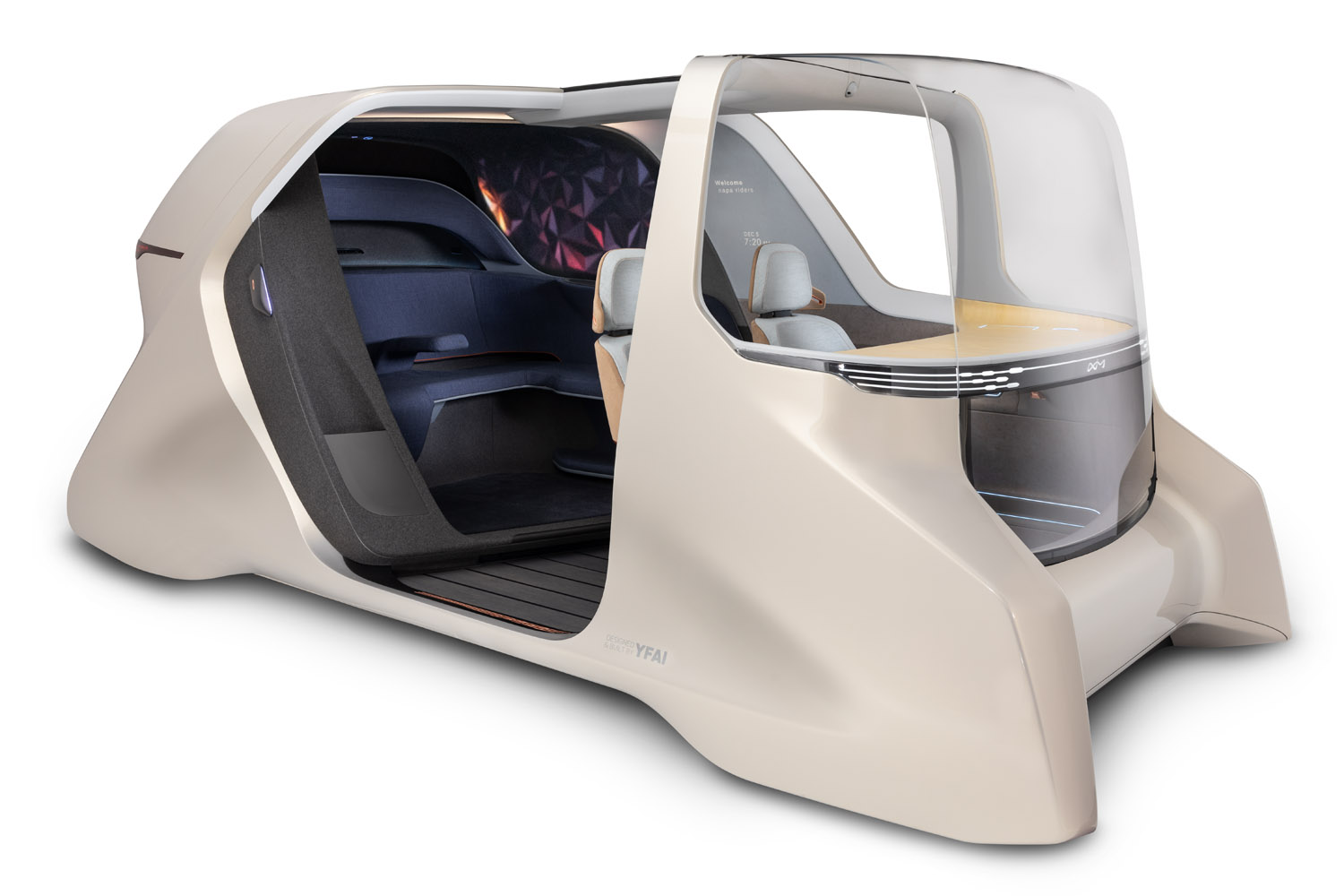 Stout says research of 6,000 people throughout the U.S., Germany and China showed quality of life was paramount, which designers boiled down to people want to be outgoing sometimes and introverted other times.

Thus, the XiM20 has a front zone with large glass to look out at the world, similar to how people today sit at a café window people-watching. It also has a back area, dubbed “the enclosure” offering more privacy, similar to sitting in a back booth at a restaurant.

In the front area, dubbed the exposure space, there are two bucket chairs that swivel, either automatically such as upon entry, or via push-button, and a large bamboo-covered table-like area.

The expansive window provides a nearly 180-degree view, thanks to wide-set pillars and a pulled-back headliner.

Storage bins are ringed in light so they are easy to spot for first-time users, as is a phone-charging pad and a cupholder. The phone pad on the table sinks and tilts when a phone is placed on it, so its owner can more easily view its screen. A cupholder automatically recesses when it senses a cup has been placed on it and is smart enough to stay down when its owner picks up the cup to take a drink. 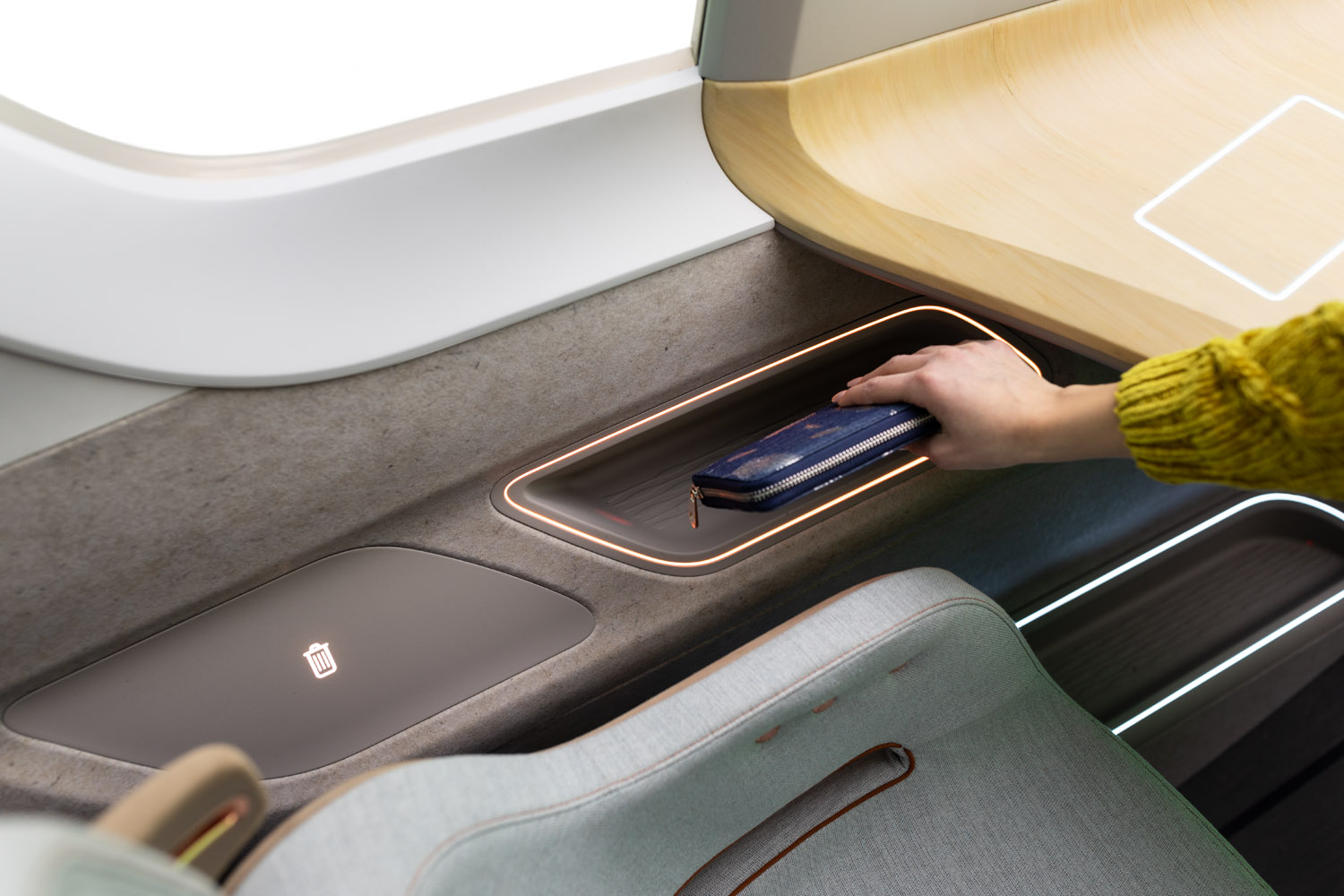 Yanfeng is housing the XiM20 in a custom-made trailer, with a projector screen to simulate a city view and replicate the experience of a moving vehicle.

The bamboo covering the table is thin enough, 0.02 ins. (0.4 mm), that it covers a touchscreen. Yanfeng dubs the hidden screen ‘shy technology’ because it can be turned off when not needed, making the table look like any other table.

Information displayed when the screen is on includes the weather at a passenger’s destination, when the vehicle last was cleaned and controls for the virtual headphones.

The latter is technology by Noveto (Yanfeng has partnered with a variety of tech companies to create the XiM20) and uses eye-tracking together with transducers that send energy waves to focus audio near a passenger’s ears. 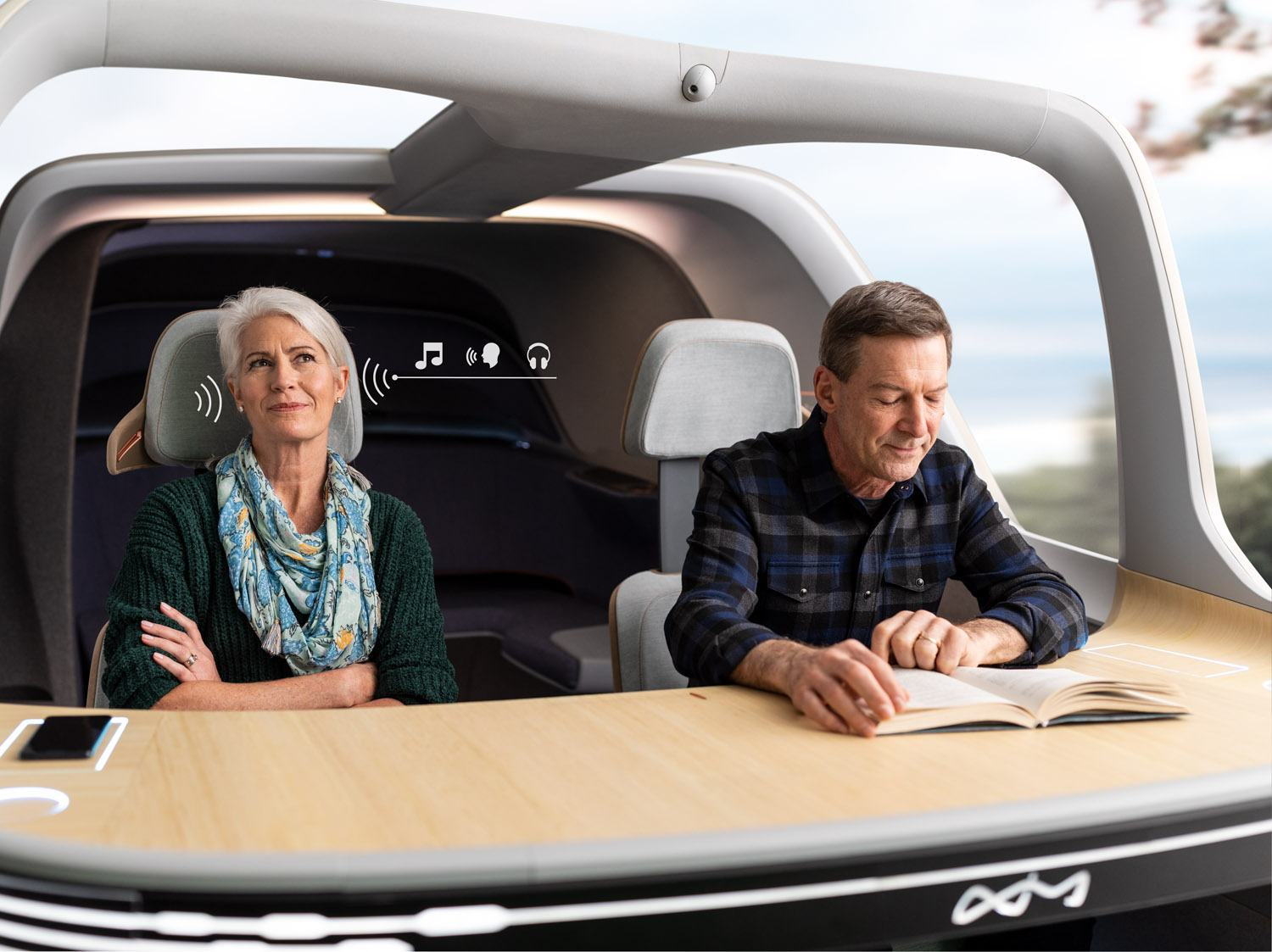 “If you move your head it’ll follow you within some degree,” says Tyler Newkirk, senior industrial designer-Yanfeng.

The rear of the vehicle is where the enclosure space lies. It is separated in physical and digital ways from the front space.

A step and a more neutral color palette delineate the rear from the front, as does a slight wrap-around privacy wall.

“If that’s not quite enough, we wanted to engage as many of the senses – instead of being pulled out into the world you’re sort of pulled into this space,” Newkirk says.

Hearing and scent senses are engaged thanks to an audio track and an aroma pumped through a rear vent.

The vehicle’s cloth-covered walls and ceiling contain more shy tech in the form of backlit displays with interactive elements.

“If I put my hand up, particles will run away from my hand – and I don’t have to touch the surface for that to happen,” Newkirk demonstrates as one of several programmed nodes displays particles. The node changes to one with geometric shapes. “(It’s) very cool, very entertaining and it really helps you feel immersed in this space,” he says.

The interactive ceiling display is powered by a 3D stereoscopic camera, sensing down to a cubic centimeter, which also is helpful to remind passengers not to leave items such as a wallet or keys behind when they exit the vehicle.

If something is left behind, such as a bag of fast food, the vehicle theoretically wouldn’t go pick up its next riders, but instead go back to a service station for cleaning.

Cleanliness is a concern when it comes to shared transportation. To lessen germs, an ultraviolet light, similar to those used by hospitals to sanitize patient rooms, is broadcast over surfaces between riders. 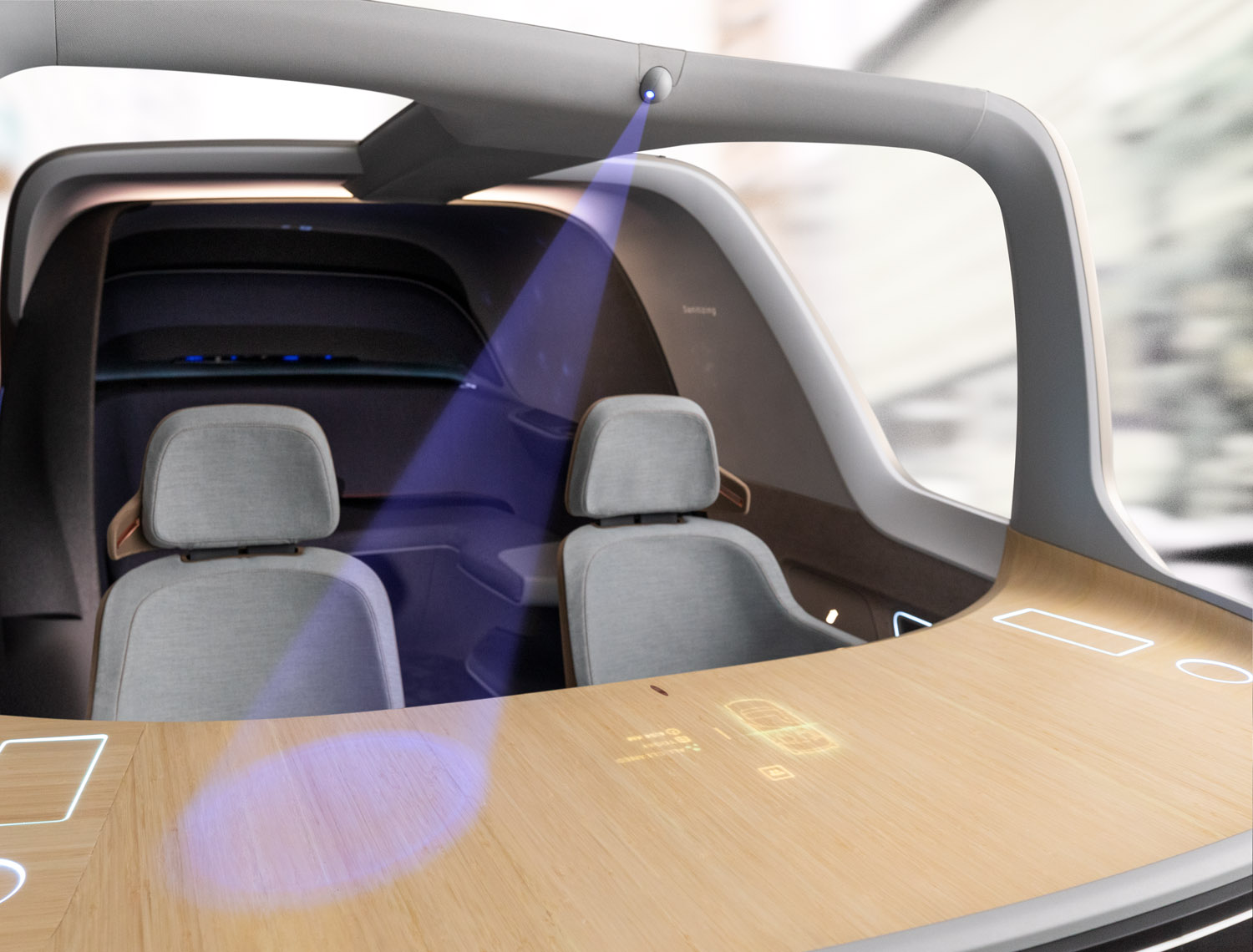 “Since it is a shared vehicle, we want to make sure every time it arrives to pick up new passengers it’s fresh,” Newkirk says.

When the vehicle arrives at its destination, it plays a sequence that reminds passengers to collect their belongings. In this demo, a book is left in a bin so the light ringing that bin activates.

Yanfeng debuted the XiM20 earlier this year via the Plug and Play tech incubator in Silicon Valley. It is taking the vehicle on the road to supplier and automaker customers throughout the country and soon will ship it overseas to Europe and Asia where it also will travel to customers.

Stout says feedback so far has been good, although one customer complained the interior seemed too expensive. He was happy with the comment, but corrected her as he says the cost of the XiM20 interior is “substantially less” than that in a $30,000 midsize sedan available today due to lack of touchscreens and switchgear.

“That’s design success from my perspective because if you look at this interior, it felt expensive to this woman, but we’ve…spent a little more money on areas that today we don’t spend any money. You’re giving the impression of luxury and this is unaffordable when in reality you’ve just redistributed the investment or where the money is being spent.”

Yanfeng sees this concept as a 2030 vision, with a nearer-term vision for 2025 still up in the air. However, Stout says most of the shy tech inside the XiM20 is available today and could be presented in a more traditional way inside a vehicle.