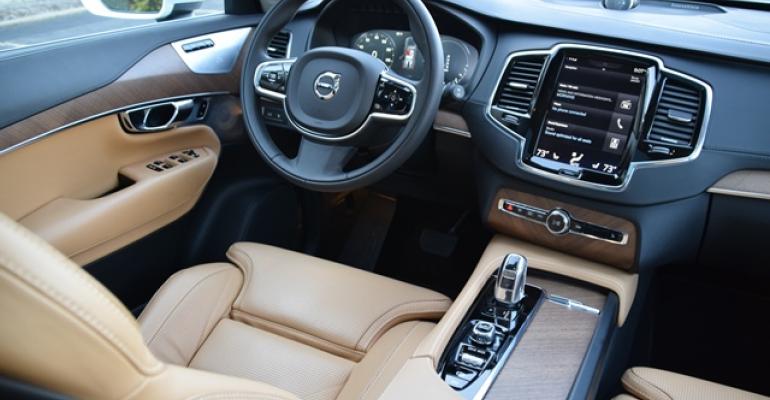 Volvo layers up the 7-passenger XC90 with smart safety features such as ergonomic and orthopedic seats designed to prevent back injuries if the vehicle is headed into a ditch. This crisply styled interior is highly intelligent and surprisingly clean.

The interior of the Volvo XC90 CUV is exceedingly sophisticated but in a way that is warm and welcoming rather than haughty and offputting, in keeping with its Scandinavian roots.

Its intelligence is immediately apparent in its standard “Sensus” touchscreen, which allows easy paging through vast menus of vehicle settings and entertainment and information options. For instance, the City Safety collision-avoidance system can be customized based on how quickly the driver wants an alert. This is a world-class human-machine interface.

With its pedigree in occupant protection, Volvo layers up the 7-passenger XC90 with smart safety features such as ergonomic and orthopedic seats designed to prevent back injuries if the vehicle is headed into a ditch. It took seven years to design the seats, alone.

Don’t forget the detection of cyclists and pedestrians during day or night and road-sign identification, which will help avoid trips to traffic court so long as warnings are heeded, or the 360-degree surround-view camera system that helps in crowded mall parking lots. It’s as if the CUV has several additional expert pairs of eyes to ensure safe passage.

Beyond safety, the XC90 interior is brilliantly styled and thoughtfully laid out. From the diagonal grain of the Linear Walnut wood inlays and Orreffors crystal gear shifter to the gleaming brightwork and sleek and slender head restraints, the XC90’s cabin is a credit to all things Swedish.

All this sounds fairly straightforward, but these elements are surrounded on three sides by a soft leather ridge that flows from the center stack to the armrest, seeming to shelter the controls from a harsh winter storm.

This highly intelligent interior is surprisingly clean, with only six buttons on the center stack for

There’s a hypnotic beauty in the gentle bow of the metallic bar separating leather from wood on the door panels and the bulbous metallic-wrapped Bowers & Wilkins premium audio speaker that rises from the instrument panel, always in view of the driver.

Contrast stitching often jazzes up an interior, but black on black leather and white on tan leather in the Inscription model evaluated definitely were the right call.

We’ve driven several variants of XC90 over the past year, and none has disappointed. The T8 Hybrid starts at $68,100, and our tester rolled in with an $84,005 sticker price. That sounds steep, but it’s competitive with other large luxury SUVs that lack the XC90’s panache and real-world fuel economy. Besides, non-hybrid versions can be had for under $50,000.

The XC90 interior does everything well, so it proudly wears a thumb-sized blue and yellow Swedish national flag stitched into the passenger seat near the left shoulder.

This CUV is the latest Scandinavian supermodel.