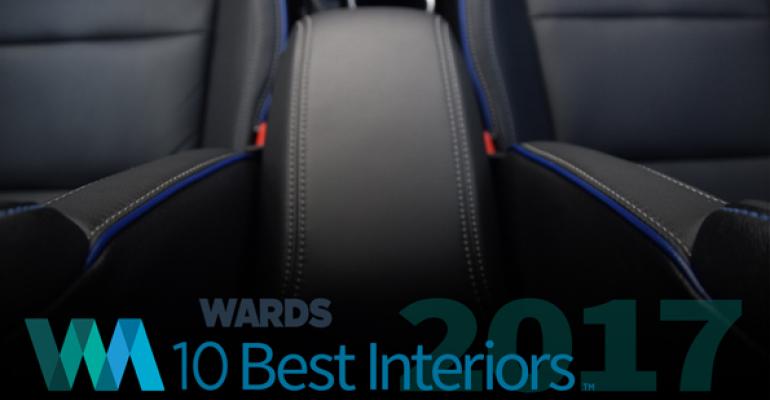 There isn’t a dog in the field, although some contenders excel in these areas more readily than others and are vying for spots on the list.

WardsAuto will announce the winners April 17, but until then the editorial staff will continue combing through, studying and test driving the rest of the entries, a process that began in early February.

Trends in automotive interiors become apparent during this annual exercise, and this year’s takeaway is unmistakable: Automakers are churning their vehicle interiors with unprecedented speed, eager to integrate new technologies, softer leather, better sound systems and richer colors in hopes of catching the eye of a potential customer.

Standing pat does not appear to be an option, even for automakers that reached the winners’ circle last year.

Take, for instance, Lexus, which won in 2016 with the RX luxury utility vehicle, the No.1 player in a segment filled with first-rate interiors.

This year, Lexus is introducing its most aggressively styled cabin ever in a production vehicle: the LC 500, a fast, sexy 2+2 coupe whose mission is to raise the brand’s image well beyond its traditional conservative leanings.

That strategy worked for many years, but today Toyota’s premium brand has been slipping in the sales race and needs something more.

So the LC features dramatic door trim with grooves that resemble the pleats of a curtain, and the whole passenger compartment, including the headliner, is bathed in warm Alcantara microsuede.

The RX and LC are fine interiors, but casual observers would be hard-pressed to find carryover interior bits from the ute to the coupe, besides the font used for gauges and buttons.

From the climate controls and the steering wheel to the interface for the infotainment system, the LC showcases a new, more emotional design philosophy at Lexus.

This trend toward a steady procession of product updates recently has surfaced also in powertrain development as we select the Wards 10 Best Engines. But the pace of change within vehicle interiors is more rapid, largely because cosmetic or certain functional alterations within the cabin are easier and less expensive to adopt.

It’s because of this that the Wards 10 Best Interiors competition starts from scratch each year, focusing only on those interiors that are all-new or have been significantly redesigned from the prior model year. Winners from the previous year are not eligible, unlike in the engine competition.

Another good example of an automaker illustrating the brisk evolution of interiors is BMW. A year ago, the all-new 7-Series flagship sedan cruised to a Wards 10 Best Interiors win.

This year, the automaker offers two new premium sedans that advance the themes and content seen in the 7-Series: the slightly smaller (and more sporty) 540i and the Alpina B7, a hand-finished limited-production variant of the 7-Series with a 600-hp twin-turbo V-8 and 12 leather upholstery options.

Our $153,845 test vehicle is awash in “Tartufo” Merino leather, a lustrous shade of rusty brown named for an Italian ice cream dessert. Providing brilliant contrast with the quilted leather seats is white stitching that resembles salt on a Bavarian pretzel.

The WardsAuto judges have seen several interiors this year with inviting shades of brown leather, sometimes resembling caramel or butterscotch – in vehicles such as the Bentley Bentayga, Buick Encore, Maserati Levante, Mazda CX-9 and Nissan Rogue.

This year’s field of nominees – dictated by each automaker’s product cycles – certainly tilts toward the luxury side of the market.

But there are several reasonably priced mainstream vehicles in the hunt with solid interiors, including the Chevrolet Cruze Hatchback, Honda CR-V, Jeep Compass, Kia Sportage, Subaru Impreza and Toyota Corolla.

You might ask, how can the Sportage compete with, say, the Jaguar F-Pace for a Wards 10 Best Interiors award? It doesn’t.

We don’t have segments per se, but we evaluate each entry relative to its competitive set. So the Sportage would need to beat out the CR-V, Compass and Rogue while the F-Pace is up against the Maserati as well as the Buick Envision, GMC Acadia Denali and Infiniti QX30.

There is no price cap for Wards 10 Best Interiors, but we try to shape the list to represent the overall market as much as possible.

This is the seventh year for the Wards 10 Best Interiors competition, and winning automakers will receive their awards at a special ceremony during the WardsAuto Interiors Conference, being held May 9 at Detroit’s Cobo Center.

Photo galleries of each nominee have been appearing on WardsAuto, and an extensive package profiling the winners will begin posting in late April.

Nominated vehicles are scored based on aesthetics and design harmony, as well as materials, ergonomics, safety, comfort, overall value and fit-and-finish. Editors also test the user-friendliness of the human-machine interface to see how effectively vehicle information is communicated.

This last category now has its own competition, Wards 10 Best User Experiences, which will be conducted this summer as a way to gauge the interaction between driver and vehicle via touchscreen, head-up display, connectivity and, among other things, voice activation.

Winners for Wards 10 Best UX will receive their trophies at the WardsAuto User Experience Conference, which will be held Oct. 5 at the Suburban Collection Showplace in Novi, MI.