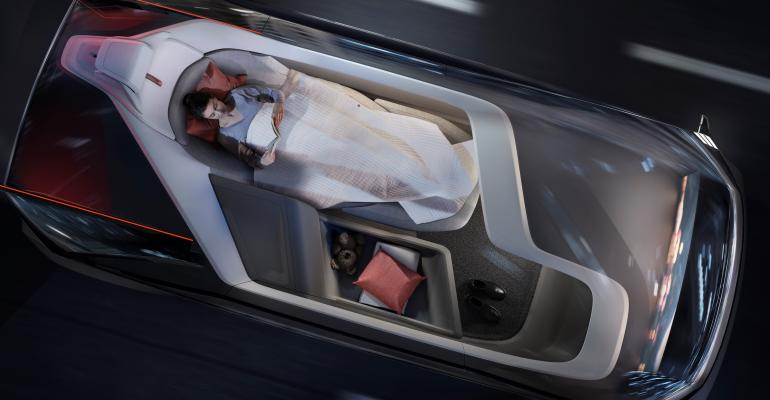 Volvo: Be Prepared for How People Want to Sit in AVs

Automakers working on autonomous vehicles are facing a paradigm shift allowing passengers to do what they want in the cabin while remaining safe, even when reclining.

The supposed march to Level 4 and 5 autonomous vehicles has resulted in a variety of scenarios for how passengers will position themselves inside the cabin.

One popular theory is, if they are no longer forced to face forward, they may just lie back, in the back.

This has safety engineers at automakers and suppliers trying to figure out ways to protect someone in a prone position.

Lotta Jakobsson, senior technical specialist-injury prevention at Volvo, says the industry has to be prepared for anything a passenger may do in an AV.

“I call it a paradigm shift in crash safety simply because we need to think about details in another way than we have had to do before,” she tells Wards of AVs at a recent Volvo event.

Today vehicles are certified safe and salable by various governmental organizations such as NHTSA in the U.S. and NCAP in Europe, for people sitting upright, with the driver and passengers facing forward and sitting still, locked in place essentially by a 3-point seatbelt; crash-test dummies are developed for this setup.

But Volvo and others are working to develop new tools like reclined dummies, using human body models (via digitization) that it can more easily adapt to various body sizes and types.

“I think that customers actually expect you will not be injured in a car that is driven by the car,” she says of AVs.

For reclining, it is important to get the seatbelt over the hips, Jakobsson says.

“As soon as you recline, you will also rotate your hip bone,” she says. “So these hard parts (of your body) which you need for the belt, they will be further down. Your belt will be (loose) and then you will slide under the belt,” an occurrence called submarining in vehicle-safety parlance. Because passengers recline in today’s cars, submarining can happen if there is poor seat design or belt geometry.

However, in Volvos there is a raised steel structure near the front edge of the front-seat-bottom cushion to lessen the chance of occupants sliding under a belt. But that same structure may not be sufficient for the future, Jakobsson says.

“There is just a lot of studies ongoing here at the moment – how much do we need to make more of this kind of structure to stop you? How much more do you need to pull (via belt tension)? And if you pull too much, you will actually fracture the hip bone which is not good.”

Airbags won’t be of much help in AVs when the location of the passenger varies, so thus some kind of connection to the car is needed to keep passengers safe, or a type of cocoon-style seat with walls, she says, similar to some airplane business-class seats that create a barrier to lessen the chance of an individual becoming airborne in a collision.

An ordinary blanket served as the restraint in the concept, but Volvo is taking the idea further.

“We are investigating if you can make something in this (blanket), like straps that in a crash will position where you're strongest, like (a 3-point seatbelt) does,” Jakobsson says.

She motions to hips and upper chest when discussing where theoretically a blanket with built-in straps would buckle in a passenger and says Volvo has applied for a patent based on such a design.

“If you end up in a crash it will be your protection, so it's kind of that mindset that we're working with that you will get protection, not primary, but embedded in something that you choose for other reasons…and then we might need the frame around (a reclining seat) as well to (account) for motions.”

She adds the challenge will be to know where a person is exactly when strapping in, so he or she isn’t inadvertently secured across a softer part of their body. She sees that issue being solved with sensors by the time AVs are ready for use by the general public.

The era of new mobility will require a paradigm shift allowing passengers to do what they want inside autonomous vehicles while remaining safe, “because otherwise autonomous drive is not interesting for the customers,” Jakobsson says and they will not want to ride in AVs.

That puts the onus on automakers to “develop restraints for what the customers would like to do,” she says.

Volvo has been one of the more bullish automakers on autonomy. It entered into a joint venture for AVs with Uber in 2016 and has said it will offer autopilot for highway driving by 2021.

It and partner Veoneer, both in the JV Zenuity, were granted approval by the Swedish government earlier this year to test hands-off Level 4 software in Volvos driven on highways in the country.

The Swedish automaker has said it expects AVs to make up a third of its sales by 2025.