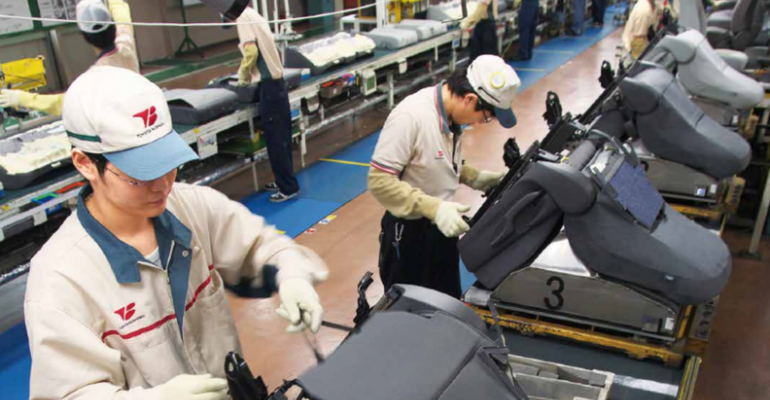 Toyota Boshoku’s MX191 concept, looking ahead to future autonomous driving, brings together a range of technologies focused on safety, comfort and energy savings.

At both CES 2020 earlier this month and the Tokyo auto show in November, automotive supplier Toyota Boshoku sent a strong message about its future and always in the context of its past.

Its MX191 concept – standing for Mobility eXperience – joins together five Toyota Group suppliers who collaborated on the undertaking. In addition to Toyota Boshoku, these include Denso, Aisin Seiki, Tokai Rika and Toyoda Gosei.

The concept, looking ahead to future autonomous driving, incorporates an array of cameras and sensors (we were told more than 10) while bringing together a range of technologies focused on safety, comfort and energy savings.

Wards talked with Takeshi Numa (below, left), Toyota Boshoku’s president since April 2018. Before joining the supplier’s board in 2016, Numa was executive vice president in charge of manufacturing at Toyota Motor Europe.

Wards: What is your business vision? Where do you want the company to be 10 years from now, even five years?

Numa: As you know, we established a five-year plan several years ago and we’re working to meet those objectives. But simply stated, we want to be an “interior space creator” to create new value for our customers while improving safety and enhancing comfort. In this regard, we are looking at autonomous driving and how we can support occupant safety.

Keep in mind that the industry is still only at Level 2 – advanced driver assistance – of self-driving cars.

Wards: What is Toyota Boshoku’s role in this?

Wards: And you are working in conjunction with other Toyota Group suppliers?

Numa: Yes. Denso for air conditioning, Toyoda Gosei for airbags and airbag systems, Tokai Rika for seatbelts and switches, and Aisin Group for seat and door controls. This is a collaboration.

Wards: So will Toyota Boshoku be taking the lead in developing the autonomous- and assisted-driving systems? Or will that be Toyota?

Numa: We are focusing on the car’s interior, only the interior space.

Wards: Then extrapolating from this, is part of Toyota Boshoku’s business roadmap to become a system integrator of car interiors for Toyota?

Numa: Not just for Toyota. We will try to deliver systems to other OEMs, but not just systems comprising seating and other interior parts (including door trim, lighting, headliners and fabric for seating). We also want to offer other parts such as motor cores for hybrid systems and stack manifolds and separators for fuel-cell vehicles.

(Others include the supplier’s air-filtration products, which also are related to its interiors concept.)

And for the time being our focus will be on Toyota. Of course, we will try to demonstrate each system to other OEMs as well.

Wards: Will you try to formalize these relationships with other group companies in a way that might involve capitalization? I always thought, for instance, that Tokai Rika’s switch business would be a better fit inside Toyota Boshoku and Toyota Boshoku’s engine-components business, basically, resin parts, might be better placed with Denso or Aisin.

Numa: We currently think of this as a soft alliance. In the future, we’re not sure. It depends on competitive factors.

Wards: So in the future, you might consider formalizing these relationships (possibly as a

Numa: “Might.” But basically, we are planning to work together within the Toyota Group.

Wards: You mentioned seats. How many seats does Toyota Boshoku make annually?

Wards: And you expect that volume to increase in the context of Toyota expanding its alliances to include Mazda, Subaru and others?

Numa: We now have a relationship with Tachi-S (a seating and interiors supplier to Nissan and Honda). We are also working together with Daihatsu and its seat suppliers. And with the construction of Mazda’s and Toyota’s joint venture plant in Huntsville, AL, we have had dealings with Delta Kogyo Co. and Toyo Seat Co. (Mazda’s main seating suppliers). 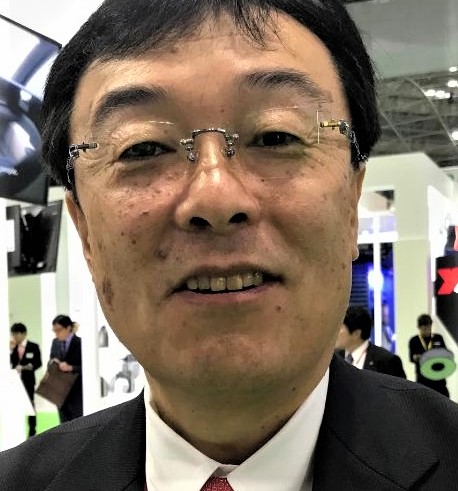 Numa: Right now we have nearly 100 plants. We plan to reduce that number.

(In Toyota Boshoku’s 2019 annual report, Numa reported the supplier plans to reduce plant numbers 30%. “By consolidating production,” he says, “we will streamline operations and reduce logistics costs” while operating its business around five major regions: the Americas, Europe, China, Southeast Asia and Japan.)