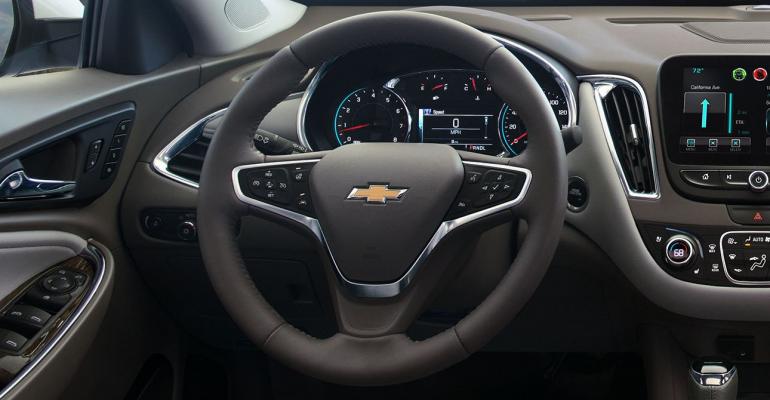 The steering wheel is no longer simply the means to point the tires &ndash; it&rsquo;s become command central for everything from audio controls to semi-autonomous driving functions, all while making a styling statement and serving as the primary interior touchpoint.

Just a few decades back, grip and leverage were the key drivers as giant diameter was needed to crank the wheels in a given direction, especially in vehicles without power assistance. With power steering came smaller wheels, but rarely did designers pay much attention to anything beyond the number of spokes and placement of the horn button or rim. The advent of air bags and their commodity placement only exacerbated the dearth of steering-wheel design.

But during our testing for the 2016 Wards 10 Best Interiors competition, we couldn’t help but notice the surprising level of attention now being paid to steering wheel feel, function and styling. It’s as though the steering wheel has become the center of attention, whether in an inexpensive entry-level Honda Civic or a maxed-out luxury machine like a Mercedes-Benz GLC300.

The ’16 Chevrolet Malibu, a nominee in this year’s competition, is a prime example of good design. It starts with the wheel’s oval shape that provides a better fit to the human hand than a perfect circle of old, says Chris Fusco, General Motors-user experience design manager for Chevrolet and GMC.

“Almost any car nowadays has a good steering-wheel design,” Fusco says. “That is the component that you grab onto and hold onto more than any other part of the interior other than the seat. And it’s the second most interactive part.”

Another good example of form and function is the ’17 Chrysler Pacifica minivan, a 2016 Wards 10 Best Interiors winner with a highly interactive steering wheel that sports a leather-wrapped rim with an inlaid alloy ring on upper-trim models.

“A good steering wheel these days is all about being in control of the vehicle,” says Chris Benjamin, FCA North America-head of interior design. “It’s not only about steering, but controlling basic functions such as the information on the cluster, volume and music source. The ergonomics have become increasingly important with the increased functionality. The real key is to strike the right balance between comfort for driving and reachability of the controls.”

Safety is a driver, with the internal structure built to meet defined standards and the airbag proportion setting up the wheel’s size, Fusco says. “We call it the ‘golden brick’ – the space you cannot violate.”

Then there’s all the technology that must be integrated into the remaining wheel real estate. In the area where a simple horn button and maybe a crude audio volume rocker switch used to reside, designers now must incorporate everything from voice control and audio aids to switches for semi-autonomous driving functions such as lane-keeping assistance and adaptive cruise control.

Fusco says Chevy’s latest achievement is the 5-way human-machine-interface rocker switch that controls the cluster and intuitively mirrors what occurs there, providing a simple way to handle a number of complex functions without covering the wheel spokes with myriad switches. The same controller is shared with GM pickups and Buicks with the new interactive cluster.

Borrowing an idea patented by Chrysler, GM adds rocker switches on the back of the steering-wheel spokes to control audio volume and tuning.

Then there’s the actual feel of the wheel – the heft and thickness, materials and craftsmanship, and even the suggested hand-placement locations – that get substantial attention nowadays.

“Leather-wrapped is the price of entry, but you even have to be careful of the stitch patterns you choose, because some can be very rough,” Fusco notes. “You want to provide a substantial and robust feel, with security and confidence telegraphed through the wheel.”

The steering wheel, Benjamin notes, can affect whether the overall interior feels modern.

“As a driver, it is the closest part of the interior in front of you, and has a psychological effect on your feeling of ‘being in control,’” he says. “It is everything from how much bright trim is on it to the rim section to the materials and also how those materials are divided in the contact areas.”

While present-day wheels may seem cutting edge, designers already have an eye on what the future – and autonomous vehicles – might bring.

“I think you will see a paradigm shift on the shape of a steering wheel, and how ‘users’ instead of drivers interact with it,” Benjamin speculates. It’s also possible, he says, that a purist driving culture may evolve where driving is the sole focus and the wheel is stripped of extraneous buttons and switches.

And with head-up displays, augmented-reality windshields and autonomous vehicles, the entire environment will change.

“Fifty years out, you might not need a wheel at all,” says Fusco.