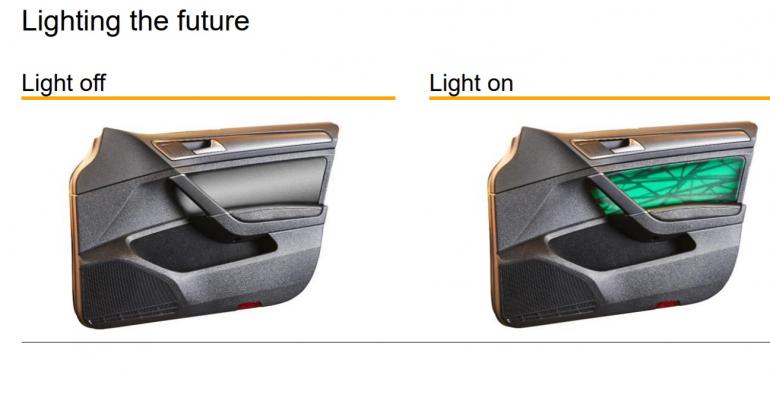 Autonomous vehicles will require new interior surfaces to cope with heavy usage from dozens of occupants. Industry experts see a host of innovative materials that are stylish, lightweight, soft and compatible with airbags, touchscreens and sound systems.

DETROIT – The coming age of autonomous vehicles, particularly those that will be shared by different passengers every day, is bound to play out like the wild west for materials producers, as automakers wrestle with cleanability, repairability and the surface integration of electronics.

From a business standpoint, suppliers are concerned that a drastic reduction in the number of personally owned vehicles will translate into a proportionate drop in materials needed by the transportation industry.

Experts speaking on a future materials panel at last week’s WardsAuto Interiors Conference agree vehicle producers will need a lot less material for cabins in coming years as production volumes decrease, but they also insist many next-generation fabrics and surfaces will be much more sophisticated.

“I do not think the quality of materials we will put in cars will go down,” says Erhard Barho, vice president of R&D at Benecke-Hornschuch Surface Group. “If there’s no driver anymore but passengers who want to look around, then we need to upgrade to have a nice interior in more areas.”

He calls out XOnano, a company that makes smartfoam by integrating nanofiller sensors that generate piezoelectric signals. The material is being evaluated for military shoes. In automotive applications, Eller says the smartfoam can be used for impact sensing, measuring force or pressure over a large surface area or for thermal conductivity or vibration sensing in a seat.

“I can imagine many applications in which you want to sense BSR (buzz, squeak and rattle) and undulation in the vehicle body,” Eller says.

He highlights another possibility for smart interior materials: embedding transducers in A-, B- or C-pillars or in a package tray to act as speakers, reducing significant weight. Continental, the German supplier, has been a pioneer in this product development, Eller says.

Although autonomous vehicles may lead to fewer personal vehicles in production, Eller says self-driving cars open the door to innovative materials and processes that add value.

“What’s the point of just selling a pound of plastic? Why not make it a part that has functionality and therefore value?” he asks. “Interior plastics are evolving from dumb to smart, thereby creating value.”

And if autonomous vehicles never gain widespread acceptance, “there’s lots of opportunity” for these same smart materials in traditional vehicles with steering wheels, requiring a driver.

By 2040, some analysts forecast production of 33 million autonomous vehicles globally, and nearly 90% of them are likely to be electric, says TJ Allison, director-advanced development at Auria Solutions, a joint venture launched last September between Shanghai Shenda (owning 70%) and IAC Group (owning 30%).

“Somewhere in the mix between the electrification of cars and maybe the decline of internal-combustion engines, things will change,” Allison says. “Things will change in terms of what the vehicle needs and what functionality will need to go into that vehicle.”

But no matter how the market evolves, discerning consumers will always appreciate craftsmanship, safety and efficiency, says Barho, from Benecke-Hornschuch Surface Group.

A division of Continental, Benecke-Hornschuch focuses on hard and soft materials such as artificial leather and woodgrain and curved touchscreens for the auto industry.

On the safety front, Benecke-Hornschuch has developed for instrument panels a series of soft-touch textile variants, such as Acella and Xpreshn, that are lightweight, durable, cleanable, sewable and require no scoring for airbag deployments, Barho says.

One of these materials “will be in serial production soon,” he says. “It will likely be first in production in an electric vehicle.” But Benecke-Hornschuch sees lots of potential to apply artistic flourishes to new materials in future vehicles, such as opaque or translucent surfaces that can provide functional or ambient lighting from door panels or center consoles.

In normal daylight, the supplier’s Acella Hylite product appears like a conventional door trim, but the surface lights up at night in various colors or grains depending on customer demands.

“We see this clearly coming,” Barho says. “We have made prototypes.”

Autonomous cars and taxis could be shared by dozens of people every day, which means flooring and other materials will need to be more durable, while also being stylish and able to muffle noise.

Auria is preparing to launch a new product, Armorlite, a heavy-duty industrial material that can be used for flooring and patterned to look like – among other things – carbon fiber, wood planks, marble, camouflage and diamond plating.

“Whatever you can print, we can do it,” Allison says. In Taber abrasion testing, conventional non-woven and tufted automotive carpet lasts about 2,000 cycles. In the same testing, he says Armorlite can endure 15,000 abrasion cycles.