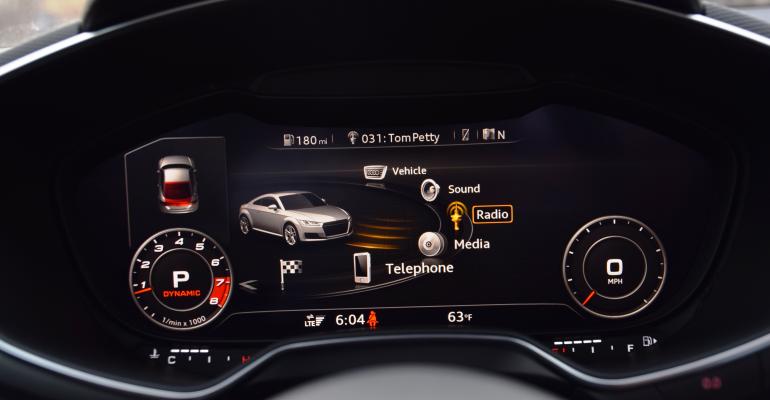 In sporty TT, MMI (Multi-Media Interface) content paired with driver information and instrumentation on single screen behind wheel in a &ldquo;virtual cockpit.&rdquo;

Yes, the ‘16 TTS cabin is a fine example of Audi interior design at its best. But two key innovations in particular make strong statements and set it apart from competitors: Climate controls integrated into the air vents and MMI (Multi-Media Interface) content paired with driver information and instrumentation on a single screen behind the wheel in a “virtual cockpit.”

“Bundling the climate controls with the air vents was a big challenge because it was necessary to completely disassemble the climate unit into parts that could be integrated into a compact air vent,” says Audi interior designer Artur Deponte.

“Also, this car is the first with the instrument content in one part of the screen and the MMI content in another part directly in front of the driver, instead of in the center. And you can control the MMI functions from the steering wheel. This was a big challenge because it was very complex to combine those two separate functions into one from the IT aspect.”

Deponte adds the TT/TTS occupies such a special place in Audi’s lineup that working on it is very special for a designer: “I well remember the kickoff meeting for this third-generation TT. One of our primary objectives was to analyze its genetic code. We said the next generation should be very iconic because the TT is an Audi design icon. Second, we wanted to keep it very driver-focused. Third was a dimension we call ‘joy of use.’ And fourth was to make a strong statement with strong character.”

“Audi has built its brand around outstanding interiors,” says WardsAuto editor Tom Murphy. And no fewer than three new Audi interiors – A4 sedan, Q7 CUV and TTS coupe – were up for 2016 10 Best Interiors awards last May. Tough choices.

“We picked the TTS,” Murphy says. “We were thoroughly smitten with its luscious Express Red diamond-stitched leather front seats with wing-back shoulders that wrap around occupants like a super-hero’s cape. We love the satin-finish aluminum trim that glistens even on a cloudy day and the generously proportioned (considering the size of this 2+2 coupe) cargo hold when second-row seats are folded.”

The new MMI control is more intuitive with 2-way toggle switches, and a touchpad atop the rotary knob and its scroll direction are reversed to “normal” instead of (counter-intuitively) inverted.

The reconfigurable virtual cockpit is so driver-focused only the new TT, TTS and R8 sports cars have it. (The A4 and Q7 offer similar features but have secondary screens). It spreads high-resolution vehicle data and Google maps across the screen in front of the driver’s eyes, yet readily can be seen from the passenger’s seat.

Deponte points out the interior designers work closely with an interface designer and color/trim and serviceability colleagues to blend the cabin’s rich materials and transitions between them.

“For the TTS, instead of the typical leather and natural grain, we have an exclusive, very technical artificial grain with a 3-D cross-line pattern that looks very modern on top of the dashboard wing,” he says. “We are very focused on high-quality standards and making sure the patterns match all of the surrounding surfaces and contours.”