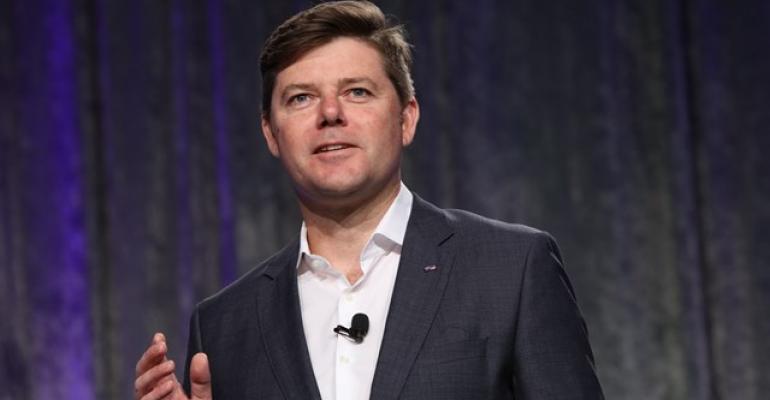 In an address to the WardsAuto Interiors Conference, Cadillac&rsquo;s Andrew Smith says connectivity will compel designers to think differently about innovation.

“It works really well,” he says of the move from Detroit, where Cadillac was founded 114 years ago. “We have more travel than anyone was expecting. But that’s OK.”

In fact, Smith says after addressing the WardsAuto Interiors Conference here, the two New York staffers he works most closely with were in Cadillac’s design studios yesterday and he’ll visit the brand’s Lower Manhattan headquarters for two days later this week. Next week, they’ll travel as a group to markets outside the U.S. where Cadillac is keen to grow its business.

“We’re moving as a group a lot,” he says. “But it’s given an opportunity to the brand side to attract talent that you can only find outside of the auto industry. When you look at the caliber of the team they are assembling in New York, it is just fantastic.”

Cadillac President Johan de Nysschen hatched a plan to move Cadillac’s sales and marketing teams out of Detroit shortly after he was hired in 2014. The idea, de Nysschen says, is to extract the brand from the GM bureaucracy and give Cadillac the autonomy it needs to remake itself as a leading global luxury brand. Other recent bids to regain relevancy against competitors such as Mercedes-Benz and BMW prior to de Nysschen’s stewardship were unsuccessful.

“If we didn’t change the geography, the risk was the behaviors and attitudes would not change,” de Nysschen told WardsAuto of the decision, which mirrored brand relocations he performed while running Audi and Infiniti.

So far so good, says Smith, who works out of Cadillac design HQ in Warren, MI, outside Detroit. That’s also where Cadillac’s engineering staff remains.

“It’s given (New York) a little freedom to rethink the brand and feel confident about the proposals, and Dare Greatly is just the start of it,” Smith says, referring to Cadillac’s first solo marketing campaign that mates the brand’s bold, expressive vehicle designs with notable innovators outside of automotive. “And keeping the product and brand message consistent is very important.”

The new energy is palpable, Smith claims. He cites a recent trip to Orange County, CA, where every morning the valet of a luxury hotel parked his ATS-V on the forecourt ahead of other supercars.

“They were all like, ‘Who knew Cadillacs were so cool?’ So getting that message out there, it’s created a buzz.”

Just as Cadillac is undergoing a transition, so is the greater global design organization at GM with the coming retirement of Ed Welburn. Welburn led GM’s worldwide styling studios for 11 years, capping a 44-year career at the automaker. Mike Simcoe, a native Australian like Smith, takes over for Welburn on July 1.

By all accounts, Welburn has had enormous impact on GM design over the years through his focus on strengthening global brands and nurturing “a creative, inclusive and customer-focused culture among its designers,” as company Chairman and CEO Mary Barra has said.

Simcoe, however, is no neophyte. He brings 33 years of international design experience to the helm.

“It’s going to be a handover more than a radical change,” Smith says. “Mike will bring a focus to continue to raise the execution of the product. We’re going to continue to push hard. I’m excited about it. And I can understand his accent.”

Smith’s address to the conference focuses on the future on of automotive interiors in an age when connectivity and autonomy are having an increasing influence on design. Both factors will compel designers to think differently about innovation.

“Going forward, relying on growth or success from product innovation alone will be a challenge,” says Smith, who over 20 years has led GM production and concept designs on three continents. “As technologies become ubiquitous within competitors and we’re matching feature-for-feature, product can no longer be the only differentiator.

“And when you factor in the speed and the reach of digital and social media, and the challenges to brand allegiance, it follows that creating a meaningful experience is one opportunity to create a competitive advantage. As every product becomes a connected device, the need for all disciplines of design to work together in unison has become vital to manage the experience.”

Smith has the same message for suppliers hoping to gain GM design business.

“We are at a point where great design will rely on great collaboration,” he says. “So the first thing I ask when I meet with a supplier is, ‘What kind of team do they have and how can they work with my team? What kind of collaboration can we have?”

Smith also asks how suppliers can put innovative technologies into context. “Put them in a storyline customers can make sense of. How does it fit the brand or customer promise?”