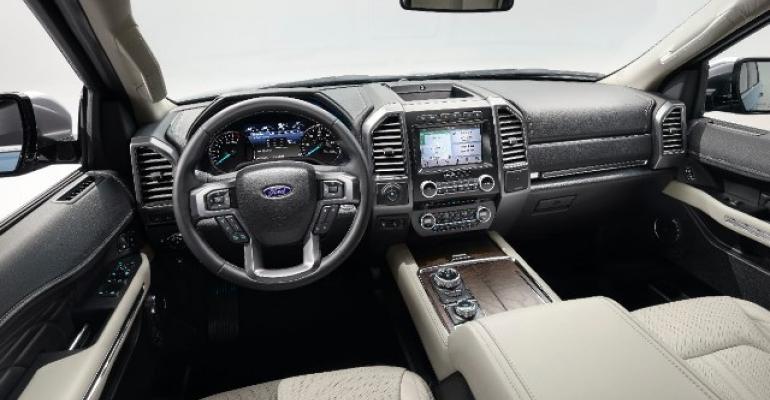 Aluminum bodies and turbo engines get all the focus, but the all-new &rsquo;18 Ford Expedition&rsquo;s interior gains significant functionality and capability as well.

DEARBORN, MI – As Ford prepares to launch the all-new ’18 Expedition, attention deservedly is focused on the large SUV’s adoption of the same weight-saving, aluminum-intensive body the automaker introduced three years ago on the F-150 pickup.

While it’s noteworthy that use of the lightweight alloy saves 300 lbs. (136 kg) in the second-generation Expedition, the conversion also permits Ford engineers to add extra space, functionality and technology inside to better serve its intended buyers.

Ford says those buyers are looking for seating for up to eight passengers, space for their luggage, flexible cargo capacity and towing capability, all to accommodate a family-oriented lifestyle that includes regular vacation trips, routine towing and ability to support hunting, camping and fishing outings.

“It’s a very capable and adaptable interior,” McCarty says. “It’s not just about the cockpit or the driver and front passenger, it’s about everyone in the vehicle. Every seat is a good seat.”

The vehicle’s Sync 3 user interface incorporates a highly responsive capacitive touchscreen and a Wi-Fi connectivity capable of supporting up to 10 devices as far as 50 ft. (15.2 m) away from the vehicle.

“It’s actually a usable third row – it’s comfortable for adults even on long trips, which is unique in this segment,” he says.

Up front, changes include Ford’s second application of a rotary shifter, first introduced on the ’17 Fusion, replacing the console shift lever. The change doesn’t add any new real estate atop the console, but it does open up the space visually and frees up storage space under the shifter.

The electronic selector also automatically shifts to Park when the vehicle is stopped and the driver attempts to exit the vehicle or when the ignition is turned off.

The rotary shifter resides next to the Terrain Management Control which offers a variety of modes from Eco to Tow to Snow to assist the driver.

Camera- and radar-based safety and driver-assistance features include everything from full-range adaptive cruise control and lane-keeping assistance to the ability to set the blindspot detection system to help spot vehicles even when pulling a trailer.

Driver information is presented in an optional 8-in. (20-cm) color instrument panel while the center screen is a standard 8-in. display. High-end B&O Play audio is optional.

Second-row seating, either the standard 40/20/40-split bench or the optional dual captain’s chairs, slides fore-and-aft depending on needed legroom; the seats also slide and then release and tip forward to allow easy third-row access. Each seat can slide and flip independently, even with a child seat in place.

The second-row entertainment system features two independent, seatback-mounted video screens capable of receiving input via DVD, USB or HDMI inputs. The system also can stream video in and out via Wi-Fi – in from a home cable system or out to third-row passengers’ mobile devices, for instance.

“Is there still a need for a system like this?” McCarty asks. “Yes, because it can do so much – it can do much more than a mobile device can.”
Back in the third row, two adults will find ample shoulder and legroom with power-reclining backrests adding comfort. The 60/40 split-folding row is fitted with seatbelts, headrests and seating for three.

When cargo is the primary mover, second and third rows fold flat at the touch of buttons on the rear inside pillar. Flat inside panels don’t intrude into the cargo space and the rear opening is wider, McCarty notes. The long-wheelbase model can handle a standard sheet of plywood with the rear hatch closed, he says.

Keeping cargo inside is the idea behind a thoughtful addition dubbed the Cargo Protector, a raised lip molding on the rear lower sill to prevent loose items from rolling out when the liftgate is opened.

Although the Expedition has seen several significant refreshes over its 21-year history, the latest edition represents the vehicle’s first ground-up makeover since its introduction as a ’97 model. Built at the automaker’s Louisville, KY, plant, the Expedition goes on sale this fall.