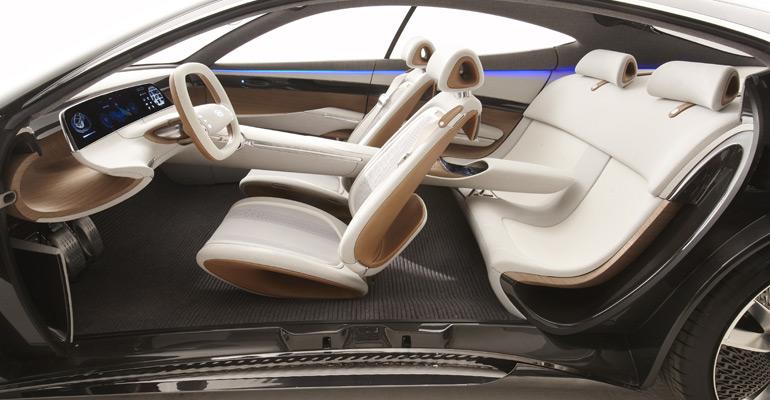 The Korean automaker’s sexy Le Fil Rouge concept coupe is an effort to rethink everything about the way a vehicle looks, is constructed and expresses intent.

PLYMOUTH, MI – While its sleek, futuristic exterior has received much of the buzz, Hyundai’s Le Fil Rouge concept-car interior is equally as interesting and boundary-pushing.

Hyundai Design’s Vice President of Styling SangYup Lee tells Wards the automaker is exploring not only dramatically new shapes and appearances for interiors, but also an interior that would be easier to assemble.

“The (instrument panel), it’s always a huge piece of plastic,” Lee says in an interview at the recent Concours d’Elegance in Plymouth, MI, where Hyundai displayed what he considers the IP-less Le Fil Rouge (see photo at bottom of article). “Because (uncovered the IP) looks so ugly, we cover it with plastic. And the plastic doesn’t look pleasing, so we put nice leather on top of it.

“And that’s not enough, so we put a stitch on top of it,” he continues. “And oops, it’s too big, so we have to put like three airbags on the top of it. So in a way, it doesn’t really make sense.”

Hyundai drastically reduced the depth of the IP in Le Fil Rouge by forgoing a traditional forced induction heating and cooling system with a blower and ductwork. Because the vehicle is all-electric, there is room for the climate-control system to fit under the hood in space traditionally occupied by an internal-combustion engine and not take up space in the cabin.

Instead of forced induction, Hyundai uses an airplane-inspired two-way ventilation system which blows air over the car’s tubular curved surfaces. Tube architecture, seen in the photo above, makes for lightweight construction, and the tubes in the concept car’s doors act like ducts to move air to the backseat.

Lee also notes this IP design is more factory-friendly, not requiring a robotic arm to lift and angle it into the cabin on an assembly line nor workers to push and bolt it in place like a traditional “huge IP” does.

Hyundai also wanted to challenge the notion of what materials are suitable for an interior, Lee says, noting the automaker used part wool fabric inside Le Fil Rouge.

“Traditionally we see leather being the more premium fabric, but if you think about back in the days (of) the horse and carriage the leather is outside,” he jokes.

The designer says the perforated fabric used on the concept car’s seats is 40% wool, noting “it’s new, but it’s not that new” as indeed horse-drawn carriages typically had wool-covered seats.

Rather than being “totally exposed,” steering-wheel buttons are under fabric for a more ambient rather than direct feel.

One of Hyundai’s design missions with Le Fil Rouge is to start “pushing (the boundaries) of every single component in the car,” says Lee (see photo below), as well as create more emotional Hyundais that connect with vehicle buyers in the same way Italian vehicles by Alfa Romeo and Maserati do. 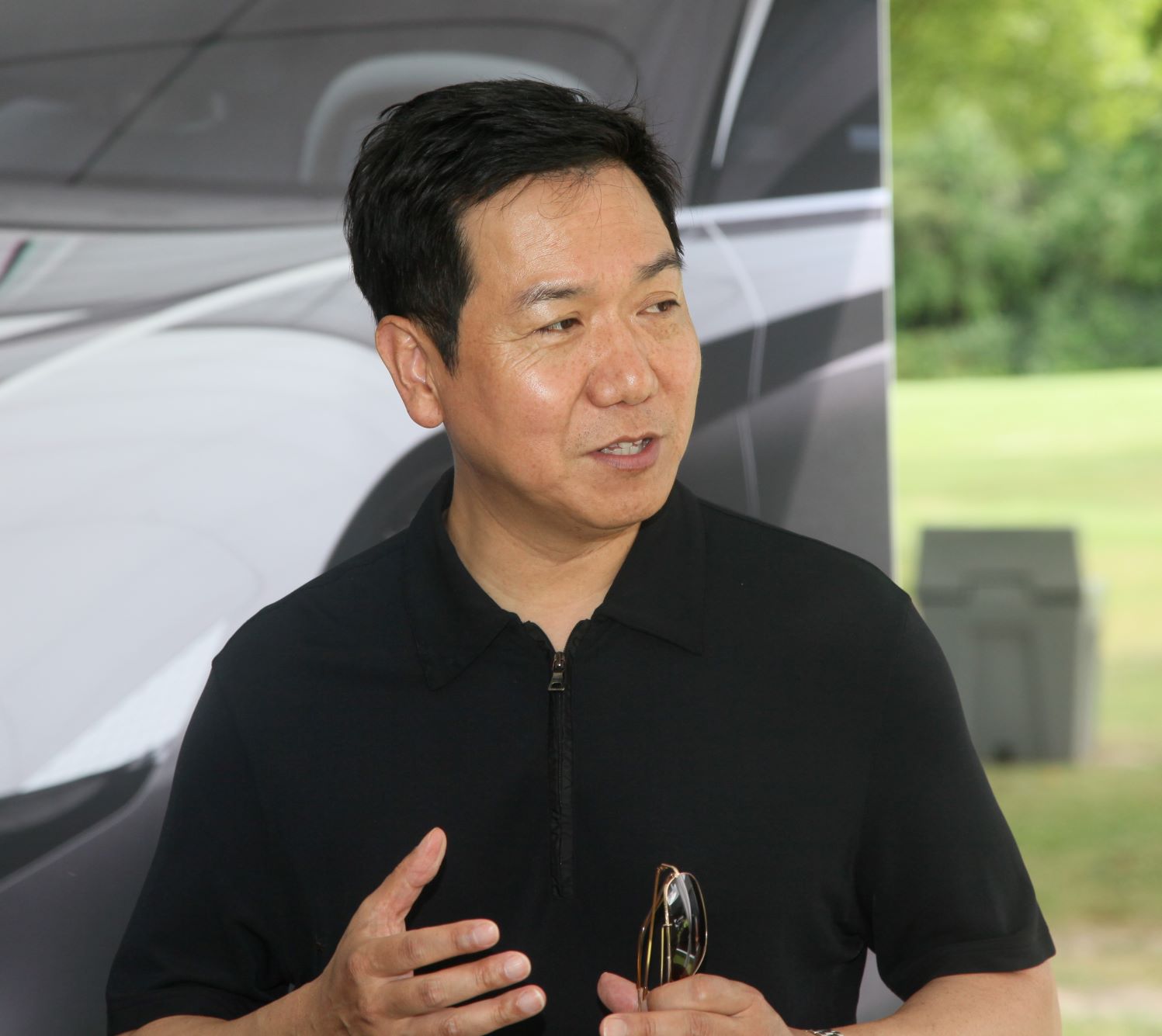 While Hyundai vehicles rank highly on value in third-party surveys, “in the future this is not enough. This is not gonna cut it,” Lee says of a need for the automaker to shift toward more passionate design.

Hyundai has said the concept ushers in the “sensuous sportiness” era of design for its brand, an era that will bring “instinctive beauty, emotional value and desirability” to its models by creating harmony between architecture, proportion, styling and technology.

The vehicle has a low, wide stance, Coke-bottle-shaped sides and hefty amounts of composite plastic, which makes it similar to other autonomous-electric concepts today. But Hyundai takes a unique approach to the car’s technology.

When Le Fil is in autonomous drive mode, lighting below the character line on doors activates to alert other drivers. Headlamps, hidden under the car’s “parametric jewel” grille, will dim as the car will not need to see the road ahead as brightly lit as a driver does.

In normal drive mode, with a human taking the wheel, headlight brightness goes back up and LED strips around windows activate.

Elements of Le Fil Rouge, French for the common thread, are production intent, such as the triangular parametric-jewel design seen in the grille and wheels.

New interpretations of Hyundai’s signature cascading grille also are due.

Lee notes BMW may be able to get away with that level of sameness in its vehicle faces, but Hyundai, as a mass-market brand with a huge portfolio of models, cannot use one grille across all of them.

Instead, he says Hyundai’s grilles will be differentiated but still with the “negative shape” of the cascading grille. He compares future Hyundai-brand grilles to a chess set.

“It’s got the king, queen, bishop, knight, and all the players all look different, they function different. But when they are together they work as one team, so that is the philosophy Hyundai wants to take with our next generation of (vehicles),” Lee says.