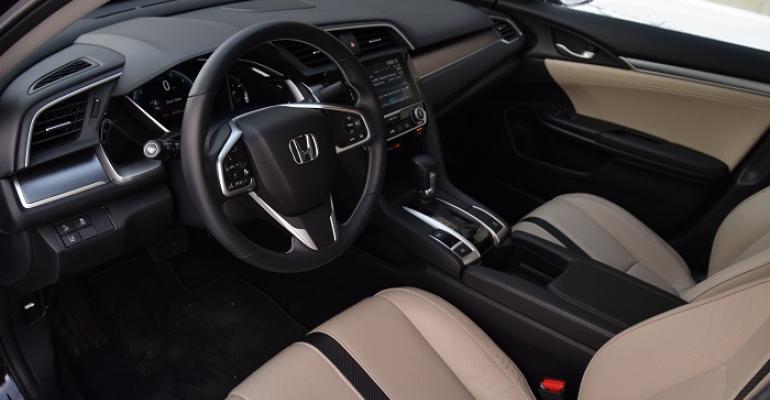 The 10th-generation Honda Civic makes us forget all about the disappointing ninth-gen model&rsquo;s interior, thanks to upmarket materials and style not normally found in a C-car.

It more than makes up for the blah and basic ninth-gen Civic interior of five years ago and shatters expectations for what the passenger space in a C-car should look like.

With his comment “Wow! This is a Civic?” judge Steve Finlay put into words what many of us were thinking the first time we opened the door of the $27,335 ’16 Touring sedan that arrived at our office in February.

A wide, black-leather stripe is the design star. Running down the center of the front seats, it spices up what could have been a basic beige interior.

Also saving this car from basic beige-ness is tastefully applied brushed-metallic trim pieces on doors, around the shifter and on the gauge cluster and steering wheel. Most metallic trim is deep silver, but doors and the passenger side instrument panel get trim pieces in an unexpected bronze finish.

Indicating luxury are white stitching on the steering wheel, seats, door panels and the center console, along with “possibly the most pleasing steering-wheel leather ever,” says judge Bob Gritzinger.

As much as Honda nails the car’s interior appearance and materials, the Civic also scores well on ergonomics, safety, comfort and fit-and-finish.

Most controls are placed low on the center stack, within easy reach of the driver. Judge Tom Murphy loves the redundant climate hard buttons on the stack, allowing users to bypass the touchscreen, while judge Gritzinger gives kudos to the perfect driver seating position. Believe it or not, we still come across vehicles with seats and wheels that don’t quite line up.

The Civic’s second row has shockingly abundant headroom, and its middle seat is above average on the comfort meter, refreshingly not the penalty box we’re used to in many C-cars.

Some people are slow to embrace the volume slider in lieu of a knob on the center stack, but it can be forgiven thanks to the steering wheel’s volume button/slider.

While it is pricey for a compact, remember space-wise today’s C-cars are yesteryear’s D-cars. And it’s clearly evident you get a lot for your money.

“This is, hands down, the best Civic in a long time,” says judge Dave Zoia.