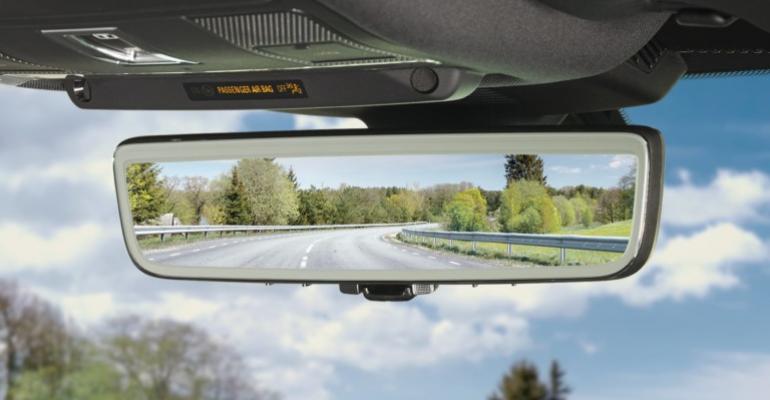 As vehicle interiors become places for relaxing and not just driving, Gentex continues to explore ways to give new vehicles ways to track what’s happening in the seats and in the ducts, even when the car isn’t moving.

“I look at the interior of a vehicle as a convenient way for the OEMs to differentiate brands,” says Neil Boehm, Gentex’s chief technology officer and vice president of engineering. “How do you differentiate a Cadillac from a Lexus? You have to create an experience that people really gravitate to.”

For example, Gentex brings an updated version of its Full Display Mirror (FDM) to CES. This high-tech rearview mirror contains a 2-megapixel camera and infrared emitters positioned behind the glass to offer a good field of view as well as make it easier for automakers to install it, since it doesn’t require a redesigned dashboard or other major interior modifications.

The new FDM also offers features found in previous incarnations, like a mirror-integrated LCD that can display unobstructed images from a rear-facing camera.

Other features that can be added to the FDM include a sort of integrated dashcam digital video recorder (DVR). Gentex and Toyota introduced this set-up in Japan in the fall of 2020, Boehm says, and Gentex has updated the system with an app that can transfer images and videos from the DVR to a smartphone.

Boehm says this recorder and app will launch in overseas markets in the next 16 to 18 months and expects U.S. automakers will want to offer it here, perhaps in the next three years or so, as demand increases. More people will be interested in just such a device now that some states are changing their insurance laws from no-fault to at-fault insurance, he says. 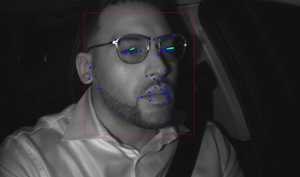 Gentex is also getting more involved in technology that recognizes distracted drivers. In the spring of 2021, the company acquired Guardian Optical Technologies, which was working on a sensing module that used infrared emitters, a wide-view camera and lasers.

Gentex uses this module, installed above the rearview mirror, for its in-cabin sensing technology (pictured, above). Using key-point detection – which identifies where a person’s elbows and shoulders are, for example – allows the system to make predictions about what the driver is doing when a car is handling some of the driving requirements.

Using structured-light projection (pictured, below), the system generates about 7,000 pixels for each of the front seat occupants that the same camera can then turn into a depth map for tracking what’s happening in the cabin. It can also be used to detect micro-vibrations, which can indicate the presence of a sleeping child or pet. 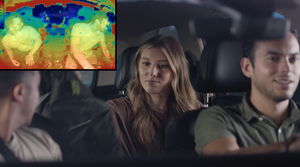 “Small, sub-millimeter movements of a baby breathing can be detected using that system,” Boehm says.

Gentex is developing these technologies in response to regulations made by governments around the world. Unattended children in cars is a focus for the European Union, and driver-monitoring technology is going to be more closely regulated for even low-end autonomous driving systems, Boehm says.

Gentex highlights its work with autonomous-vehicle company Zoox, which wanted to determine if people were smoking or vaping in one of its cars.

Gentex acquired Vaporsens in April 2020 and is using that company’s nanofiber chemical-sensing technology in a sensor that can be installed in a vehicle’s HVAC system to detect the presence of smoke or vapor fumes.

This technology fits in well with Gentex’s history – it started as a smoke detector company in 1974 – and Boehm says Gentex is expanding the sensing portfolio of this nanofiber to detect other chemicals inside a vehicle cabin, potentially identifying airborne contaminants.

Finally, Gentex shows off an updated version of its dimmable glass, which it has been working on for many years and is already in use on some Boeing aircraft for passenger windows. At CES, a Cadillac Escalade on the show floor was equipped with dimmable visors controlled by the center stack.

There are automation benefits of using built-in, “invisible” visors. But perhaps the biggest improvement is that you can still sort of see through the dimmed glass to the stoplights or other features that are not visible through standard visors.