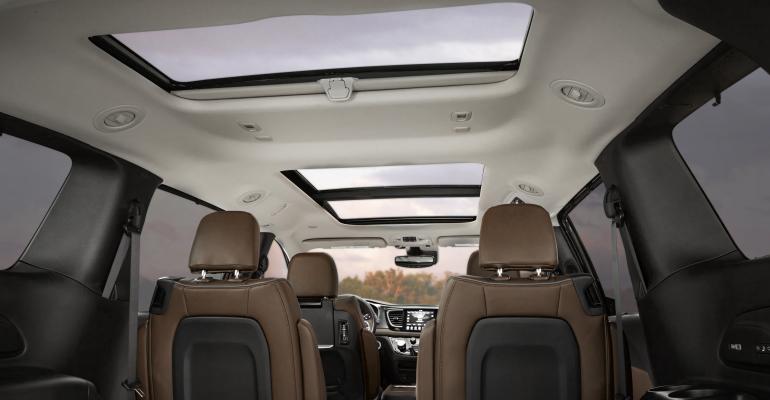 Family Van or Rolling Man Cave, Chrysler Pacifica Does It All

FCA boasts the Pacifica offers 37 minivan innovations, raising the total over the three decades since Chrysler invented the segment to a claimed 115.&nbsp;

Wards 10 Best Interiors competition has recognized outstanding automotive interiors for six years. This installment is part of a series of interior deep dives on last year's winners following in the footsteps of “The Story Behind the Wards 10 Best Engines.”

The 2017 10 Best Interiors winners will be announced in April and on display at the WardsAuto Interiors Conference May 9 at Detroit’s Cobo Center.

How many of us have tailgated at a college football game? How many have enjoyed this unique American autumnal experience in a minivan? How many, while eating lunch and watching earlier games via Wi-Fi hotspot way back in the warm, roomy cabin with its brilliantly designed and engineered “Stow ʼn Go” second-row seats tucked away underfloor?

Thanks to a happy scheduling coincidence last fall, we were able to take advantage of an opportunity to do exactly that in a well-equipped version of Chrysler’s all-new Pacifica, providing a wealth of insight into the unmatched utility and flexibility of such often-mocked “mommy” vans in general, and this unusually good (and nice-driving) new one in particular.

WardsAuto judges cite the Pacifica’s many second-row connectivity options, the new Stow ʼn Go Assist feature (which powers the front seats forward at the touch of a button), its exceptionally high-quality materials and its adult-size, reclining-seat (with optional power) third row as helping it earn its 2016 Wards 10 Best Interiors award.

Whether it is used as a family vehicle, rolling man cave or a dozen other things, FCA is reinventing the minivan and interior spaces with the Pacifica.

“As designers, our mission is to make something attractive,” says Chris Benjamin, whose role recently was expanded from head of interior design at FCA North America to Fusion Director, which combines interior design, exterior design and user-experience design disciplines.

“But we started with creating something that can improve your life. However busy your day, whatever hustle and bustle you have going on with kids, school, soccer practice and all that families go through, (the Pacifica is) trying to make all of those crazy moments and in-between moments as efficient and serene and helpful as possible.”

One priority was using contrast as much as possible in surface language, colors and materials. The control elements, including the cluster and infotainment touchscreen, have a high-tech, functionally driven, Teutonic look and are inspired by high-end audio equipment. The screen is integrated into its bezel for a flush, modern, tablet-like appearance.

Benjamin’s team looked to FCA’s people-hauler interior design heritage for ideas on substantial improvements. They wanted to recapture the usefulness and functionality of the previous Town & Country’s instrument panel, for example, “but wrap it in something a bit more serene. Everything is meant to make it feel stretched-out and wider to give the perception of more space in addition to actual more space.”

Benjamin says the shapes of the Pacifica IP, doors and seating surfaces were inspired by an image of a woman stretching a piece of cloth, engulfed in it but pushing through it, like a membrane surface, creating tension with a line created by that pushing to get sweeping, flowing forms with crisper accent points.

One of the key challenges of the whole interior was “pushing the boundaries on high-quality fit and finish, because of the amount of work and time and attention we put into that with our engineering and perceived-quality teams,” he says.

The Stow ʼn Go center seats work and fold in a completely new way. “That was quite the puzzle piece to put together,” Benjamin says, “especially the way the floor closes off the legs and fills in the holes. We had lots and lots of ideas, mockups and internal clinics. It was a nice collaborative effort with a lot of interactions between us, our seating engineering team and Magna, who produces them.”

Another useful feature is the built-in vacuum cleaner. “We are not first with a vacuum, but we wanted to be the best,” Benjamin says, “so we put it in a more usable location in the second row. We’ve done a lot of research showing that the second row is the dirtiest place, followed by the driver’s seat, then the front passenger seat, and you can easily reach all of those areas with it.

“And it has attachments that can get into all of the crevices, nooks and crannies to get rid of all the Cheerios, Froot Loops or whatever it is that kids are snacking on these days.”

From a color and materials standpoint, the goal was “not to do another gray-on-gray-on-beige interior. We wanted to make sure that the colors were soothing and harmonious but offered a bit of contrast, using accent stitching as a little pop of color. And all of the paint colors are rich anodized colors that offer a lot of interest and allow the light and shadow to dance around the surfaces in a nice way.”

FCA boasts the Pacifica offers 37 minivan innovations, raising to a claimed 115 the number accumulated over the three decades since Chrysler invented the segment (discounting VW Microbuses).

“We wanted to reinvent the segment, to create something that would be a standout product from the beginning,” Benjamin says. “When you think about it, a minivan is something that someone gets almost because they have to. We wanted to make this one a vehicle that people will want to be in and be seen in, enough that they’re happy to drop off their kids and maybe go on a date night in it because it’s cool and they feel good driving it.”