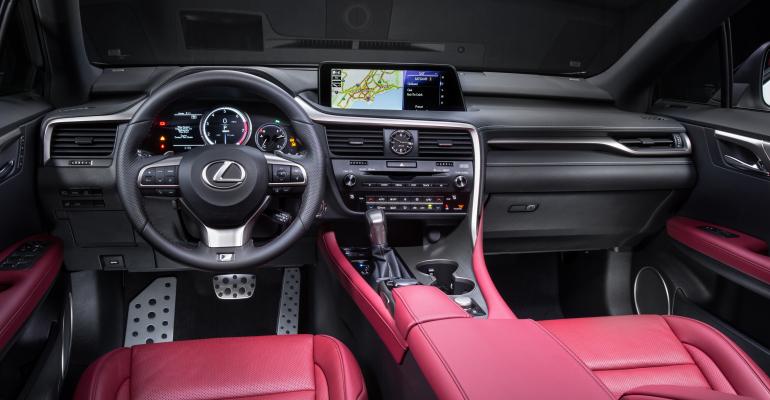 Lexus Project Chief Designer Gen Ikeda says his team is most proud of the way it achieved an expression of functional design in an elegant way. &nbsp;

Wards 10 Best Interiors competition has recognized outstanding automotive interiors for six years. This installment is part of a series of interior deep dives on what made last year’s winners stand out as we test candidates for this year’s competition.

The 2017 10 Best Interiors winners will be announced in mid-April and will be on display at the WardsAuto Interiors Conference May 9 at Detroit’s Cobo Center.

Toyota arguably invented the car-based utility vehicle with its first Corolla-based RAV4 in 1995, and the first premium CUV, the Toyota Camry-based Lexus RX, in 1998. Both offered near-car-like dynamics and fuel efficiency with the added benefits of a taller seating position and more cargo room compared with cars. Both succeeded mightily in the marketplace and helped spark the great global product shift from cars to CUVs.

The RX has led its market segment ever since its debut, despite somewhat less-than-luxury interior fitments. But the aggressively styled all-new-for 2016 RX was designed to raise the bar for CUV interiors, and it does. “Our socks are knocked off,” wrote WardsAuto editor Christie Schweinsberg, “by the cabin’s looks and content relative to its cost.... With the fourth-generation RX, Lexus has stepped up its game, dialing back the wood trim, upping the metal quotient and introducing visually appealing shapes and user-friendly technology.”

Lexus Project Chief Designer Gen Ikeda tells us the all-new cabin’s primary mission is “to create an interior design that is distinctive as RX while remaining consistent to the Lexus brand, and to inherit and evolve the DNA of the RX, which expresses progressive technology through the elegant interior design.”

One objective was creating a space that enables the driver to concentrate on driving, based on the Lexus HMI (Human Machine Interface) concept that separates the display zone and the operational zone.

“The horizontal axis of the instrument panel passing through the lower position gives a wide feeling and a sense of openness...and the vertical form from the meter hood to the center cluster separates a driver seat as a cockpit, resulting in a new...interior space with a roomy, yet snug, feeling,” Ikeda says.

Among the cockpit’s most pleasing features are the sweeping lines around its vertical stack, the wide, crystal-clear infotainment screen perched above it and the highly useful HVAC and sound system controls, twin adjustable vents, and eye-catching analog clock within it. Editors were pleased with the two big radio knobs for volume and manual tuning, and also a row of six hard buttons for instant access to infotainment functions.

Mouse-Like Controller a Plus

Contrary to some critics, editors liked Lexus’ computer mouse-like multi-functional controller which they found intuitive and easy to use after a brief learning curve and adjustments to the controller’s sensitivity.

“Say what you want, but I like the mouse,” declared judge Dave Zoia.

The mouse’s arrow precisely latches on to available menu items, unlike previous versions of the system where it was difficult to isolate an on-screen icon. Plus, the sensitivity of the mouse can be adjusted for customer preference.

“We let material and texture show differences in functions by using solid textures with solid shapes in the functional areas such as the center console and an ornament attached to air-conditioning registers, and soft materials in areas that are touched by the occupants,” Ikeda says.

And there are a couple of firsts, including laser-cut wood. “It combines the radiance (luster) of metal and the texture of real wood, made possible by progressive technology and the handwork of Takumi craftsmanship,” Ikeda says. “The stitch lines on the seat backs, which sharply cross curved lines, were enabled by a digitally controlled sewing machine.”

Ikeda says his team is most proud of the way it achieved an expression of functional design in an elegant way.

“The longitudinal design motif that connects the center console and the meter hood, for example, visually expresses movement from the display zone to the operation zone, realizing a space that enables the driver to concentrate on driving.”

One challenge, as always, was keeping costs under control. To accommodate a wide variety of available colors and trims, for example, “we employed technology that can cast various-color instrument panels by using just one tool (fixture).” For the next-generation RX, Ikeda says, “We can evolve the interior’s progressiveness by utilizing the latest HMI technology.”