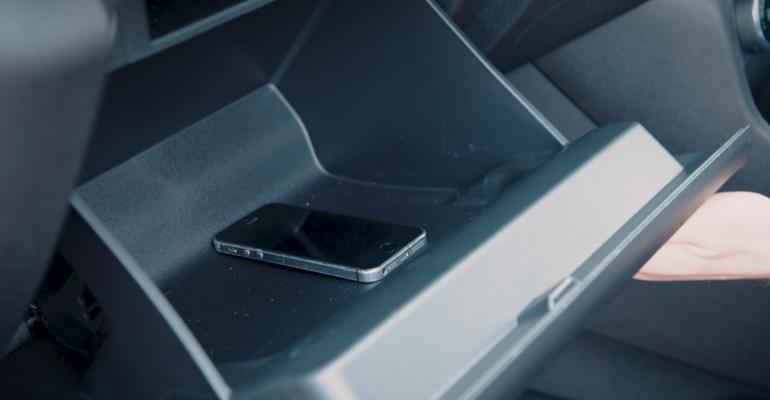 Ford sees transforming the glovebox into the phone box as a simple, effective way of changing driver behavior.

Ford U.K. and road-safety organization Brake launch a campaign to banish mobile phones from the driver’s sight by placing them in the phone box.

The phone box already is in every vehicle – it’s what’s known to most people as the glovebox.

Ford says in a statement that research reveals 39% of drivers do not know the historic intended use of the glovebox was a place to store driving gloves when most vehicles were designed without roofs.

Today 20% of respondents admit they just use the space as a garbage dump and Ford sees transforming the glovebox into the phone box as a simple, effective way of changing driver behavior.

To provide a visual aid prompting drivers to put their phone out of sight, Ford has created a My New Phone Box sticker. The stickers are to be handed out at Ford’s annual Driving Skills for Life event Nov. 17-19 in London.

The phone box campaign follows research by Ford and Brake that finds, despite new laws and tougher penalties, more than half of British drivers still admit to using their phone while driving, with 37% opting to keep their phone in view.

Department for Transport statistics show that since 2012 there has been a 79% rise in mobile-phone-related collisions on U.K. roads, with fatalities increasing 88%.

U.K. Government Cracking Down on Drivers Ringing Up
Dec 28, 2015