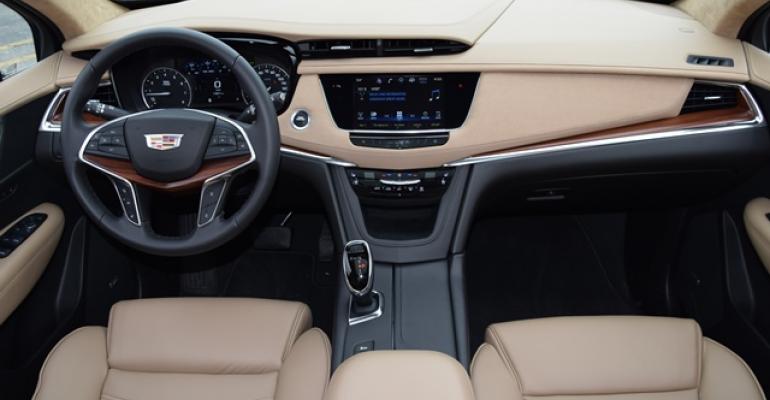 Tom Murphy
<p><strong>&quot;We&rsquo;ve exceeded what most of our premium German competitors have done, but we always want to push for more,&quot; Kucera says.</strong></p>
Vehicles>Interiors

Cadillac claims to be the only full-line automaker constructing all of its interiors using the cut-and-sew technique, which combines advanced technology with handcraftsmanship.

Cadillac’s interior designers liked the outgoing SRX’s cabin but wanted the new XT5’s to be more horizontal, formal and upscale with “vastly improved” usage of materials. And so it is, earning a 2016 Wards 10 Best Interiors trophy.

Interior Design Manager Phil Kucera says the XT5’s luxurious look was inspired by modern electronics, furniture and fashion, among other things, and a determination to allow its materials “to show their forms more expressively.

“We really want to excel at cut-and-sew, and everyone in the studio is expert on that,” he says. “Very early on, we were sketching shapes that lent themselves to the cut-and-sew process, taking that on as an asset, not a limitation, embracing it and letting it help us pick shapes and forms we like.”

Cadillac claims to be the only full-line automaker constructing all of its interiors using the cut-and-sew technique, which combines advanced technology with handcraftsmanship. Materials for major interior components actually are joined by hand stitching.

Before pieces are sewn together to form the coverings for various interior components, materials and hides are hand-inspected and the patterns “nested” by a scrap-reducing computer-automated machine. These pieces are transferred to different stations for the hand sewing of functional and decorative stitching. Application to the various interior parts, such as dashboards, door panels and center consoles, also are done by hand.

There were many challenges, including cost constraints and multiple suppliers, but everyone was very much aware this new midsize premium CUV would replace Cadillac’s top selling vehicle and compete in one of the industry’s hottest segments.

“We chose to work with natural materials: cut-and-sew, real veneers and carbon fibers. Real materials are much more challenging than fake ones,” Kucera says.

“We think it’s worth it, because the quality concerns are outweighed by the feel and the smell of the genuine approach. The way the wood curves up on the outboard sides of the vents is very counter to what a natural wood veneer wants to do. That wasn’t easy or cheap, but there was a lot of push to preserve it as well as getting the vents to perform correctly. We wanted very slim vents, but they needed to hit their target points.”

While the XT5 cabin has soft materials almost everywhere, designers wanted to go even further: “I would have loved to cut-and-sew this thing from head to toe,” Kucera says, “but there are cost constraints. We’ve exceeded what most of our premium German competitors have done, but we always want to push for more. You get a bucket of money and spend it where you think the customer will appreciate it the most.”

Kucera is pleased with the extent to which the wood and carbon fiber match up with the bright trim pieces and the precision machining of those parts.

“They lay them out, put them in a fixture and machine their complete perimeters so the parts line up,” he explains. “There is a lot of back-and-forth to make that happen correctly and I think they did a really great job with those alignments and material integrations.”

WardsAuto editors find the XT5’s materials to be “impeccable,” citing the rosewood trim on the instrument panel, doors and heated steering wheel, as well as the creamy microsuede overhead and meticulously applied to the pillar trim and IP.

The semi-aniline Maple Sugar leather seats were judged to be firm, comfortable and supportive. Metallic bits are used sparingly but to great effect, applying a satin sheen to the XT5’s doors, steering wheel, center console and the bezel surrounding the central display screen.

Interior design usually is not directly responsible for the user experience of the infotainment system, but the innovative button-free design of the original Cadillac User Experience (CUE) system was widely criticized. Did they look at changing direction?

“There was an effort to do that,” Kucera says. “CUE 1 was a commitment to no buttons, an ambitious goal. But this vehicle has groupings, touchscreen, audio and HVAC head, broken up into three understandable zones, not all in one piece. It’s backing off from, ‘Thou shalt not have buttons,’ and saying, ‘What are the go-to buttons and the best groupings of them, and what is best put into a menu system in the touchscreen?’”