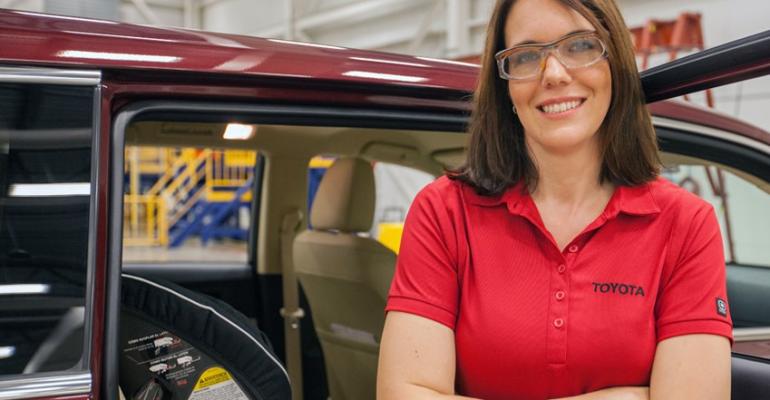 Toyota
A fascination with building and testing things has led Jennifer Pelky to a passion for child safety.
Vehicles>Interiors

Installing child safety seats is an annoying and terrifying task for new parents and grandparents. Toyota's Jennifer Pelky led the charge to create a tool that makes it easier.

There are a lot of important jobs in the automotive and mobility industries, but if you are a parent or grandparent who understands vehicle crashes are a leading cause of death among U.S. children, it’s hard to imagine a job more crucial than Jennifer Pelky’s.

As a principal engineer at Toyota that specializes in child-passenger safety, she’s just made life easier for nervous parents everywhere who strap children into harnesses like miniature NASCAR drivers. She’s responsible for a new Toyota app that takes the confusion out of buying and installing child safety seats.

When installed and used correctly, child safety seats reduce injuries in a crash by more than 70%, the CDC reports. Unfortunately, even though children are our most precious cargo, NHTSA data show more than half of all car seats are installed incorrectly.

It’s a recipe for disaster, but if you’ve ever struggled to install a child’s car seat, fumbled with the latches, and squinted at the confusing directions often written in tiny print, you know it is a truly frustrating  task – even for safety engineers.

“When I was pregnant with my first child and I went to the big-box baby store to pick out my car seat, I looked at the wall of car seats and all the selections available. I had no idea where to start,” Pelky says during an on-stage interview at Informa’s Automotive Tech Week conference in Novi, MI. Wards Intelligence and WardsAuto are part of Informa.

“Once I did pick a car seat, I wasn’t sure how to check to make sure that I was installing it correctly. I thought, ‘I’m an engineer in safety. If I’m struggling to figure this out, a lot of people must be having trouble,’” Pelky says.

The result is what they call a digital tool kit. It is titled Toyota for Families, and it features helpful car-seat-installation instructions and videos that can be accessed on laptops and phones. Anyone can access and download the app.

The team knew customers already were searching online for help, but Pelky and her colleagues wanted to provide a whole new level of detail – from identifying how seats are affixed with different latch configurations to demonstrating the instructions with videos. This required skills far removed from mechanical engineering, such as video production.

Fortunately, the team was able to recruit corporate resources to pitch in. “One of the benefits of working with Toyota is it is a giant corporation, so we have a fantastic internal media operations team we were working with who are used to doing instructional videos,” Pelky says.

Developing the whole digital toolbox project took a little less than two years from napkin sketch to completion, despite numerous hurdles including the global pandemic. It launched in March 2021 and the response was “overwhelmingly positive,” Pelky says.

The path that led Pelky to a career at an automaker is a familiar one to many in the mobility industry. When she was a young girl, she couldn’t decide whether she wanted to be a fashion designer or an F1 driver. But her dad started taking her to classic-car shows and talking about cars became something they could share.

“My dad was not the best communicator, but he was really into cars. I was always impressed with the fact that he could look at a vehicle and tell me not only what type it was but also the model year because of certain details,” Pelky says.

Talking about cars became a way for father and daughter to stay connected as they both grew older, and it led to Pelky becoming passionate about cars as well.

When she was in high school and had to start thinking more realistically about career choices, getting  good grades in science and math led to a suggestion she study mechanical engineering. She wasn’t exactly sure what that entailed, but a fascination with building and testing things led to the field of automotive safety.

Where’s she headed next? Pelky definitely has an eye on the future.

In addition to her responsibilities at Toyota and being vice-chair of the National Child Passenger Safety Board, a certified child passenger safety technician and a member of the SAE Children’s Restraint Systems Committee, she’s also involved with another fascinating initiative: child safety for future autonomous vehicles.