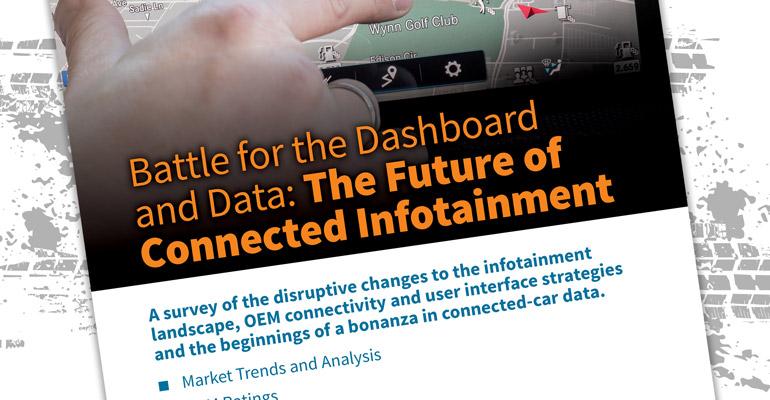 Automakers Jockey for Position in Battle for the Dashboard

Technology has changed every industry it’s touched: telecommunications, music, media and finance are just a few examples. After all, hardly anyone has a home phone, buys newspapers or CDs or goes into a bank for routine transactions anymore.

Although it’s been delayed compared to other industries, automotive is now being transformed by technology. Over the past decade, in-dash infotainment has radically shifted to include cloud-connected content and automakers have continually played catch-up to a tech industry that moves at a much faster pace.

Ten years ago, OEMs were struggling just to implement iPod integration to satisfy consumer demand to plug the popular devices into their vehicles, and the only connectivity in cars (beyond telematics) was via Bluetooth-linked mobile phones. Fast-forward 10 years and almost every OEM offers some form of connectivity, either through an embedded cellular modem, a driver’s smartphone or a combination of the two.

In-car connectivity – and the advent of the smartphone – has given drivers access to streaming services, connected navigation and local search and dashboard-based e-commerce to make restaurant reservations and find movie times and tickets. But along with connected features has come a growing need for drivers to easily access the content it offers in a safe, non-distracting manner.

More than a decade into in-dash connectivity, most automakers still strive to deliver a seamless user interface that neither causes distraction nor frustrates drivers. This is why Apple CarPlay and Android Auto have become popular among car buyers and are included on more and more vehicles, according to Wards Intelligence data.

The smartphone-integration platforms provide a familiar user interface and intuitive native and third-party apps for music, messaging, phoning, maps and more. But this reliance on Apple and Google’s tech expertise creates conflicts for OEMs.

Since CarPlay and Android Auto look the same in nearly all vehicles, any unique branding automakers design into their own infotainment systems – not to mention the millions of dollars in development costs – is rendered null and void. Perhaps more importantly, Apple and Google gain access to potentially lucrative data each time drivers search for a navigation destination, choose a song via a streaming music service or use a messaging service.

With connected-car services in the U.S. expected to generate more than $37 billion by 2023, it’s essential OEMs stake a leadership position to profit from infotainment data. And because the auto industry is poised to go through further disruption due to car- and ride-sharing and with fully autonomous technology on the horizon, it’s critical OEMs prepare for what Intel calls the “Passenger Economy” that it estimates will be worth $7 trillion by 2050.

Wards Intelligence’s new special report, “Battle for the Dashboard and Data: The Future of Connected Infotainment” analyzes the current state of connected infotainment among OEMs, as well as what the rapid changes in the space mean for suppliers. It also examines and rates each OEM’s infotainment platform, connectivity and user-interface strategy to deliver cloud-based content.

Some of the key findings of the report include:

The report also includes Q&As with key industry executives on the cutting edge of connected infotainment and the results of an exclusive Wards Intelligence survey, with insightful and candid comments from respondents.

While today’s infotainment systems deliver modest connected services such as navigation, streaming music and other content and the ability to remotely keep tabs on the car, tomorrow’s in-dash technology will deliver new, unforeseen experiences. To help put it into context, think of the jump from cell phones to smartphones a decade ago. Or from film to digital cameras 20 years ago – and what became of Kodak.

At issue is whether OEMs are prepared to make the transition to take advantage of connected vehicle platforms and the data they generate or cede leadership to technology companies such as Google, Apple, Intel and others. And become a Kodak.

Sponsored Content
HOW TO WIN IN THE REAL-TIME ECONOMY
Feb 10, 2022