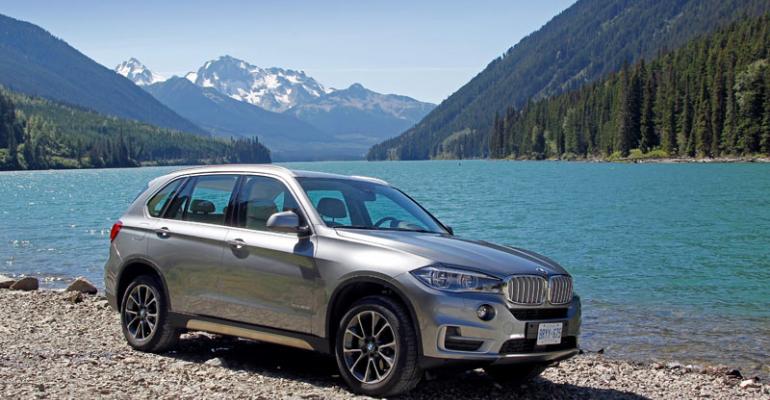 <p> <strong>All-new BMW X5 to be offered with both diesel and gasoline engines.</strong></p>
Industry News

SEATTLE – BMW, eager to dominate every luxury niche and satisfy every customer’s craving, is gearing up a product onslaught that includes additional body styles, re-engineered engines, a high-performance competition package and a redesigned cross/utility vehicle, the X5.

The fresh offerings for the ’14 model year are so numerous the German auto maker could not deliver all of them in time to the BMW Can-Am Fall Launch being held here for media. The BMW 328d sedan and sports wagon, with a new 4-cyl. turbodiesel engine, was arriving late to the port of Oxnard, CA, and could not be transported to Seattle in time for journalists to test-drive.

Still, the Bavarian cupboard is far from bare as reporters have several other new or refreshed vehicles to experience at this extended event: the 4-Series coupe, 3-Series Gran Turismo, 535d sedan with a new 3.0L inline 6-cyl. turbodiesel and updated high-output M5 sedan and M6 coupe.

The event takes journalists north to Vancouver to evaluate the new third-generation X5, which goes on sale with gasoline engines in the U.S. in November. Diesel availability will come about a month later.

Despite reaching the end of its lifecycle, the previous-generation CUV has remained BMW’s third most-popular vehicle in the U.S., behind the 3-Series and 5-Series sedans, according to WardsAuto sales data through August.

Relative to its fierce German rival, the X5 has narrowly outpaced the Mercedes M-Class (24,659), which was redesigned two years ago.

BMW’s plant in Spartanburg, SC, remains the sole producer of the X5 for global markets. Since launching in 1999, BMW has sold 1.3 million X5s; about 70% of production has been for export from the U.S. China remains the X5’s No.2 market behind the U.S.

Until two weeks ago, he says the plant was running two 8-hour shifts. Production of the new X5 continues ramping up and currently stands at 300 units per day, Dean tells WardsAuto. At the height of its popularity, X5 production reached 650 vehicles per day.

With all-wheel drive, the xDrive35i starts at $56,025, and the diesel-powered xDrive35d bases at $57,525. The $1,500 premium for diesel over comparably equipped gasoline models represents a significant reduction. In some cases previously, the diesel premium for the X5 was at least $3,000.

BMW officials expect the 6-cyl. gasoline engine to be the most popular choice and the diesel take-rate to balloon from the current 25% to more than 30%, outselling the twin-turbo V-8.

Also driven here is the 3-Series GT, or Gran Turismo, a 5-door body style with a full liftgate and folding rear seats instead of a conventional trunk.

The same package was offered first on the larger 5-Series beginning in 2009, and sales have been modest – a mere 8,961 units over the past four years. So far this year, BMW has sold 1,160 5-Series GTs.

However, the auto maker has higher hopes for the GT version of the 3-Series, consistently the brand’s best-seller. Executives say the GT is meant to satisfy those shoppers who find the 3-Series sedan impractical, too small or dull.

The media event also includes the 4-Series, a vehicle that is new mostly by name. The 2-door coupe previously was part of the 3-Series lineup, but the arrival of the sixth-generation 3-Series sedan in early 2012 offered an opportunity to separate the vehicle from the lineup.

The logic is sound: As the 3-Series portfolio grows to include a hybrid, sport wagon, multiple powertrain options and the GT body style, the coupe increasingly is lost in the marketing fray.

The new name gives the coupe a better chance to draw more potential buyers. Plus, the nomenclature for the 4-Series falls in line with the larger 6-Series and 8-Series coupes.

Bigger than the previous 3-Series coupe, the new car is offered as a 428i with a 2.0L turbocharged 4-cyl. (another Ward’s 10 Best Engines winner) and as the 435i with the turbo I-6. xDrive AWD is available with each engine. Pricing starts at $43,425, and all four variants are in showrooms now.

The Spartanburg plant is being prepped now for the X4, which will roll down the same assembly line as the X3 CUV, Dean says.