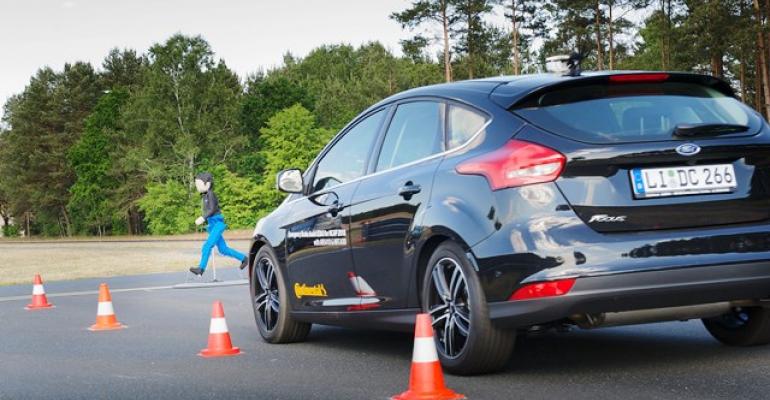 HANNOVER, Germany – Advanced driver-assist systems have been overshadowed in recent years by non-traditional automakers showing off prototype autonomous cars, but government mandates and competition among automakers for top safety scores will result in numerous self-driving features being adopted during the next five years.

In fact, automakers began installing them on cars and some commercial vehicles in Europe several years ago.

These features don’t allow drivers to read a book while behind the wheel, but they do enable vehicles to brake automatically and swerve out of harm’s way. And they promise to save thousands of lives annually.

“We could save a town the size of San Francisco each year (with ADAS systems),” says Wilfried Mehr, head of the Europe Business Unit for Advanced Driver Assistance Systems at auto supplier Continental.

It looks like the classic race between the tortoise and the hare. Companies such as Google and Tesla periodically show off futuristic self-driving technology that gets lots of attention and gives the impression they are surging ahead of incumbent automakers.

Yet traditional automakers and suppliers such as Continental, Bosch, TRW, Delphi and others are implementing a steady stream of incremental advances aimed at preventing deaths and injuries that are going almost unnoticed, yet promise to transform mobility by the end of the decade.

For instance, by 2020, typical new cars won’t be able to drive themselves to your child’s school and pick her up. But if she suddenly steps into traffic while walking home, a large percentage of new vehicles will be required to detect her presence and brake automatically if the driver does not react. And cars sold in Europe and some other regions will have to detect her in the dark or if she is hidden from sight and walking out from between two parked cars.

In about the same time frame, a typical pickup truck won’t be able drive you home from a long day at work, but if you fall asleep behind the wheel, it likely will be capable of preventing you from drifting off the road and hitting a tree.

Riding shotgun in a Ram fullsize pickup on Continental’s test track in Northern Germany, the supplier’s Road Departure Prevention technology feels like the truck is hitting an invisible guardrail when a camera detects the vehicle veering off the road. The system uses the vehicle’s electronic stability control system to brake the truck’s inside wheels and yank it back on course. It’s a simple concept and it works brilliantly.

Watching a Google car driving itself around a parking lot at 25 mph (40 km/h) is a great photo-op, but driving a typical family sedan on the test track here, seeing a child-sized dummy dart in front and feeling the car automatically jam on the brakes and prevent a potential tragedy isn’t just amusing, it’s a powerful experience.

Even if human eyes or cameras can’t see a person walking into the street from between two cars, a Doppler radar system can sense the movement of their legs before they step into danger. It’s impressive, but perhaps still not as compelling to most consumers as a self-driving Google car gliding through traffic.

Even so, critics point out the guidance systems for Google’s car currently cost hundreds of thousands of dollars, including a $75,000 laser-based radar system and ultra-sophisticated GPS tracking and mapping technology.

Meanwhile, less-complex ADAS systems are being installed in vehicles today and government mandates for their widespread installation already are in place or in the planning stages.

Continental’s Mehr says automakers selling vehicles in Europe will be required to offer autonomous emergency braking for pedestrians and bicyclists and lane-departure prevention systems for a significant percentage of their fleets by 2018 in order to earn the top government safety scores they crave.

The government rules are driven by a multinational traffic-safety initiative known as Vision Zero. It aims to curtail and eventually eliminate the 1.2 million traffic fatalities and 50 million injuries that occur on roads throughout the world every year, Mehr tells journalists here at the supplier’s biannual technology preview.

Vision Zero-related legislation started in Sweden in 1997, but laws now are being implemented in many countries – most notably the EU, U.S., Japan, South Korea and China – that require vehicles to use camera- and radar-guided systems to avoid collisions with other cars and pedestrians.

The value of autonomous emergency-braking already is proven. Installing the systems in Volkswagen Golf and Passat models in Europe has resulted in a 45% drop in third-party personal injury insurance claims in the U.K., according to an independent study.

The Motor Insurance Repair Research Center in Thatcham, Berkshire (Thatcham Research), operated by the U.K. insurance industry, says the finding is based on the equivalent of more than 7,000 Mark VII (seventh-generation) Golf models insured for a full 12 months on the road, and comes from claims data from its insurance members.

“When we saw figures based on an initial small sample, we were surprised, as they exceeded our own performance testing,” Thatcham Research Director of Safety Matthew Avery says in a statement.

“However the figures held up, even after almost doubling the sample group, and have therefore given us a glimpse of what safety on U.K. roads could look like in the future.”

On Verge of Hockey-Stick Growth

Unlike Google’s expensive laser-based radar, these automotive systems use relatively inexpensive cameras and radio-wave based radar to work in concert with mechanical systems such as ESC and electric power steering to provide guidance and control. Radar is good at object detection and seeing through glare, rain, fog and darkness, while cameras are best at object classification: identifying traffic signs, lane markers, pedestrians and vehicles, Mehr says. Combining front- and rear-facing radars and cameras can provide relatively low-cost 360-degree sensing, he says.

They are part of a technical journey that started 15 years ago with the first radar-based smart cruise control systems, Mehr says, and as volumes begin to soar they will become much more affordable.

Progress has been slow because it has taken years to achieve the production volumes and scale to make these technologies affordable on mainstream vehicles and not just top-end luxury models such as the Mercedes S-Class.

Sales of components such as forward-looking cameras are expected to soar from about 4 million units last year to about 15 million units in 2019 and installation rates are predicted to jump from less than 10% to more than 20% globally in 2019.

More than 20 suppliers from various tiers will be competing for ADAS business but “This is a completely new market that doesn’t substitute or cannibalize other markets,” Mehr says.

Considering current development strategies, Google or another nontraditional automaker likely will be first to offer a completely autonomous vehicle for sale. But with costs so high and volume production so far away for such cars, it seems safe to predict the slow-and-steady ADAS tortoises will be first to make the real money in the autonomous-vehicle race.