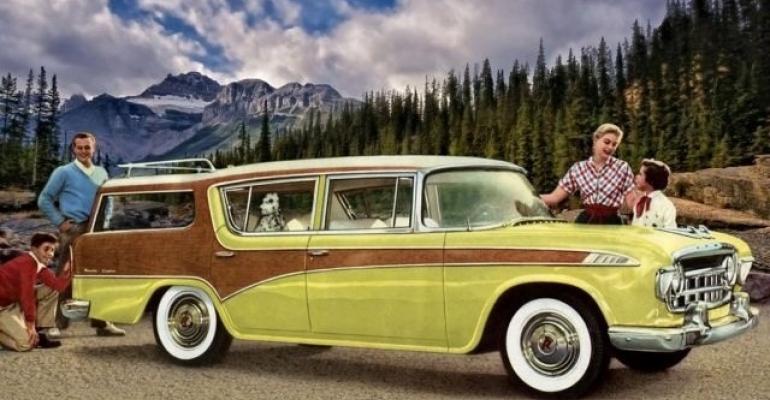 June production schedules are looking doubtful due to a shortage of wire necessary to make seat springs, Ward’s Automotive Reports says in its June 8, 1946, issue. The newsletter attributes the “crisis” to the Office of Price Admin.’s “refusal to advance wire-makers’ prices to a profitable level.” The shortage is so acute that the delivery of seats is being rationed to car, truck and bus makers for at least the remainder of June and in July. However, tight supplies of copper, lead and tin also are affecting output plans. Those shortages are blamed on low OPA price ceilings, strikes and/or government material allotments for military use. 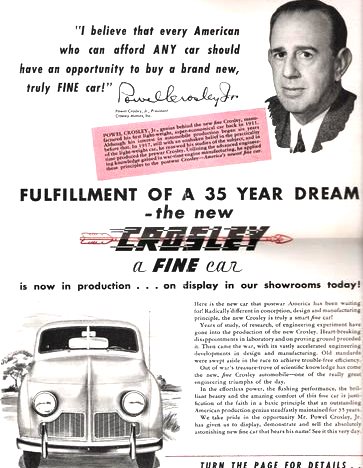 Crosley Motors officials say they hope to have demo models of the company’s redesigned small car to dealers by the end of the month. Output had been slated to begin in May with 80 units, but material delays thwarted that effort. Now Crosley plans to be turning out 100 units daily by the last week in June, eventually reaching 250 a day. Although the OPA has yet to set ceiling prices for the cars, the automaker already has 30,000 orders in hand at expected base prices of $700-$800. In a recent 2,000-mile test, a preproduction model returned fuel economy of 38 mpg (6.2 L/100 km).

B.F. Goodrich is trying to drum up business for its new Torsilastic suspension in which conventional springs are replaced by a canister filled with rubber bonded both to the casing and to a central shaft. Spring action is accomplished by “twisting” the rubber “filling.” BFG says the units provide an inherently low degree of harshness and noise, improve ride comfort, require less maintenance, and have long life and low operating costs. The units are based on similar systems developed for military applications during the war, including a 20-ton amphibious landing vehicle. A Torsilastic variant is currently used on city transit buses produced by Twin Coach.

The launch of Willys’ new Jeep station wagon has been delayed by a lack of all-steel bodies from supplier Hayes Mfg. Output now is slated to begin in August, at which time production at the Toledo assembly plant is slated to reach 450 units daily, including the popular all-wheel-drive Jeep Universal utility vehicle.

Major changes in automotive styling are shaping up for every model year through ’60, according to WAR. At least one automaker, it says, is changing from a 3-year to a 2-year cycle for major body changes and others may follow for cars in the low- and medium-price segments. Those adopting 2-year cycles are slating intros for years between major re-dos on the 3-year program. This means major styling changes will be seen in the most competitive segments of the car market annually. Ward’s says the significance of the move may be that there will be no repeat of the ’56 model year in which, for the first time in the postwar period, no Big Three automaker offers a single car line with a major styling change, with “auto sales and the general economy suffering as a result.” The realignment of styling cycles could prove to be a bright bellwether of auto market demand, softening the impact of the industry’s so-called “off years” on the country’s economy, the newsletter opines.

According to the National Auto Dealers Assn., 37% of its members operated in the red in the first quarter of the year. Operating profits for the dealer body as a whole averaged 0.8% of sales, or $40 per car, in January-March 1956, down from 3.1%, or $141, per unit a year earlier. In full-year 1955, dealers earned $80 per car, a margin of 1.7%. NADA attributes the profit decline to a car-sales slowdown after an incentive-fueled sales binge in fourth-quarter 1955. The dealer group says the outlook for the remainder of 1956 also remains clouded because dealers traditionally build a cash reserve in the first quarter to carry them through the summer months, when model year-end clearance discounts reduce profits. NADA says it’s not inconceivable that the average dealer profit margin for entire 1956 could fall below the 0.6% posted in 1954, to the lowest level since the group began tracking the data in 1949.

As previously noted, in one of its Special Bulletins, WAR now says, “After having had the opportunity to further check into the matter in quite some detail, air-spring suspension has a good chance of being almost universally adopted for ’58-model U.S. cars.”  The main reason for the move is air suspension provides a much lower silhouette than can be achieved with conventional systems. Secondarily, its load-leveling capability maintains a level ride height no matter how heavily the car is loaded, thus avoiding “objectionable door-scraping on curbs.”

Many refinements still are needed before fuel injection replaces the carburetor. One main problem is the inability of the systems currently under development in the U.S. to maintain a steady idle speed. Also when they are tuned for acceptable low-speed performance, they lose high-speed efficiency, reducing engine power. Unlike U.S. FI, some European Mercedes cars use a more advanced injection system that delivers fuel directly into the cylinder as opposed to the port area. While direct-injection overcomes virtually all of the difficulties associated with U.S. FI, its added complexity makes it too costly to replace the carburetor in most U.S. applications.

On June 2, Pontiac builds its 11 millionth car, a burgundy ’66 LeMans convertible, at its home plant in Pontiac, MI. A highlight of Pontiac’s 40th anniversary year, the milestone car was completed just 13 months after the automaker assembled its 10 millionth unit. The LeMans was chosen for the accolade to mark the success of the midsize car line. Beginning in 1926, Pontiac vehicle production reached 1.0 million units in 1935 and 5.0 million in 1954.

In an exclusive presentation to WAR, Rockwell-Standard shows off a new electronic control device for heavy trucks that helps eliminate jack-knifing of truck-trailer combination rigs in emergency braking. The device helps the driver maintain control by preventing the rear wheels of the tractor from locking up. Although Rockwell did not reveal details of its system, a demonstration of the device allowed the driver of a bobtail truck to maintain complete control when the brakes were suddenly applied on a
wet stretch of road. Without the device, Rockwell said, the rear of the truck would have swung wildly, likely hitting a row of cars parked nearby.

Significant changes are in store for American Motors’ restyled ’67 models. Classic and Ambassador each gain 2 ins. (51 mm) in wheelbase and overall length, further distancing them from AMC’s long-time reputation as a purveyor of smaller cars. The once-compact Classic’s 114-in. (2,895-mm) wheelbase and 197-in. (5,004-mm) overall length put it head-to-head with the Chevy Chevelle and Ford Fairlane intermediates. The Ambassador’s length is being stretched to 202.5 ins. (5,144 mm) on a 118-in. (2,997-mm) wheelbase. The “sporty” Marlin, previously built on the Classic platform, will ride on the Ambassador wheelbase, feature similar styling and be only slightly shorter. All three models also will be wider than prior-year variants.

In an exclusive presentation to WAR, Rockwell-Standard shows off a new electronic control device for heavy trucks that helps eliminate jack-knifing of truck-trailer combination rigs in emergency braking. The device helps the driver maintain control by preventing the rear wheels of the tractor from locking up. Although Rockwell did not reveal details of its system, a demonstration of the device allowed the driver of a bobtail truck to maintain complete control when the brakes were suddenly applied on a
wet stretch of road. Without the device, Rockwell said, the rear of the truck would have swung wildly, likely hitting a row of cars parked nearby.

Ford says it is hiking production of its increasingly popular Ford Explorer SUV when ’92 model output commences Aug. 1 at its Louisville, KY plant. The facility, sole source for the vehicles, will be able to build 270,000 Explorers annually with a total plant capacity of 389,000 vehicles a year. To accommodate more Explorers, Ford will reduce output of the Ranger small pickup, also built at Edison, NJ, and Twin Cities, MN, and its third-best-selling light vehicle in the U.S., to 101,000 annually. Output of Mazda Navajo, Explorer’s sister model, will remain unchanged at 18,000 per year. In the first four months of 1991, Explorer sales reached 76,750 units, 125% more than the 34,113 units sold a year earlier, when it replaced the aging Bronco II in February.

General Motors, Ford and Chrysler are asking the Commerce Dept. and the U.S. International Trade Commission to investigate the “dumping” of minivans in the U.S. by Japanese automakers, Toyota, Nissan, Mazda and Mitsubishi. The petition charges Toyota with selling Previa vans at margins of up to 30.5% below home-market prices. Mazda is alleged to be selling its MPV 27% below cost. To prevail, the Big Three must prove not only dumping has occurred, but also that they have been harmed by the action. If the case is proven, duties equivalent to the amount of the unfair pricing would be levied against the importers. Toyota officials call the charges unfounded and amount to little more than Japan-bashing. However, the Motor Vehicle Manufacturers Assn. says, “Rising imports of dumped Japanese minivans seriously risks present and future investments by U.S. producers.”

Financially squeezed Chrysler suffers another blow when Standard & Poor’s cuts the automaker’s debt rating and lowers it to junk-bond status for subsidiary Chrysler Financial. S&P cites “rapid depletion” of the automaker’s cash reserves as the reason for the downgrade that Chrysler called “extremely disappointing.” The automaker started the year with $3 billion in reserves, but burned through 33% of that in the first quarter. However, it hasn’t yet drawn on a new multi billion-dollar credit line, nor has it sold any of several major assets it has put up for sale.