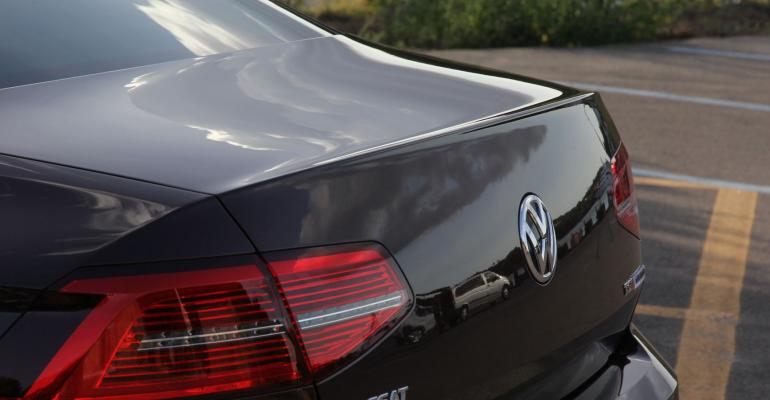 In Wake of VW Emissions Fiasco, EPA Doubles Down

Christopher Grundler, an EPA director, admits the agency does face funding limitations for testing, but says its actions will not amount to an overhaul of its procedures.

The U.S. EPA “puts vehicle manufacturers on notice,” telling automakers in a letter today the agency and its regulatory partners will step up policing of emissions from diesel-powered light-duty vehicles and employ a technology capable of uncovering the sort of defeat device employed in recent years by Volkswagen.

“We are stepping up our testing activities in response to VW’s alleged testing violations,” says Janet McCabe, acting assistant administrator-Office of Air & Radiation at the EPA. “The VW violations have made it clearer that we must continue to improve and adapt our oversight, and we will.”

EPA considers its test procedures robust and currently polices tailpipe emissions a variety of ways, but chiefly by requiring automakers to employ EPA test procedures to achieve emissions regulations. Automakers must attest to the results to receive permission to sell the vehicles.

The agency also borrows vehicles from private owners to ensure the emissions levels match what automakers report, and randomly pulls new cars and trucks off the assembly line to confirm fuel-economy and greenhouse-gas performance. In addition, EPA uses portable emissions-level testing devices to evaluate vehicles on the road.

“But technologies evolve and circumstances change, and we are continuously looking at ways to improve our compliance oversight programs,” says Christopher Grundler, director-Office of Transportation & Air Quality at the EPA.

“Today we are putting vehicle manufacturers on notice that our testing is now going to include additional evaluations and tests designed to look for potential defeat devices,” Grundler says in a conference call with journalists.

“We are not going to tell them what these tests are, they don’t need to know. They only need to know we will be keeping their vehicles a little bit longer and we’re going to be driving them a little bit more,” he says.

Grundler admits the EPA does face funding limitations for testing, but says its actions will not amount to an overhaul of its procedures.

“We are adapting it and continuously improving,” he says. “We have the equipment, we have the people.”

“We’ve bought them, we’ve already been using them,” he says, noting that up until now they have been used exclusively to test heavy-duty trucks, “Because that’s where (most) emissions are.”

As for the technological means to uncover defeat devices, Grundler remains coy. “The smart engineers at EPA and (the California Air Resources Board) and Environment Canada have come up with some clever ways to do this.”

Speaking to the Volkswagen case specifically, Grundler says the EPA, along with CARB and Environment Canada regulators, has begun testing all light-duty diesel makes and models for defeat devices.

The regulators also are working on a recall procedure for three generations of VW and Audi 4-cyl. vehicles in potential violation of air-quality standards. It is expected that all of the 482,000 U.S.-sold Jetta, Golf, Beetle and Audi A3 models prior to ’15 will require additional engineering that will take significant time.

A solution to bring’15 model-year versions of those vehicles, as well as all Passat units between ’12 and ’15, into compliance should come more quickly, Grundler says.

“The agencies will evaluate the technical solutions that Volkswagen develops to ensure their emissions performance is improves in real-world driving  and will carefully scrutinize for impacts on consumers,” Grundler says.

Back at VW headquarters in Wolfsburg, Germany, CEO Martin Winterkorn stepped down Wednesday. The longtime VW chief accepted blame for VW’s deception, which has grown to include 11 million diesels globally, but said he had no knowledge of the defeat device.

Porsche brand chief Matthias Mueller, 62, will reportedly succeed Winterkorn after a meeting today of the company’s supervisory board.