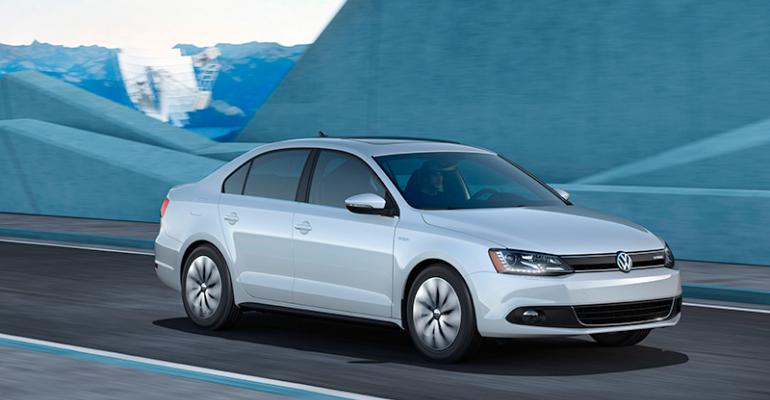 VW Sales Drop in U.S, But Brand Plans to Stay Course on Spiffs

VWA won&rsquo;t change course to goose sales as the year winds down, CEO Jonathan Browning says, adding the automaker is confident the VW brand&rsquo;s 2013 volume will top 400,000 for the second year in a row.

Volkswagen of America has no plans to step up incentive activity in December and into 2014, despite a steep double-digit drop in U.S. daily sales for its Volkswagen brand in November.

VW-brand deliveries totaled 30,727 units for the month, down 19.6%% on a daily-rate basis from 36,728 year-ago (last month had one more day than like-2012), a slump VWA President and CEO Jonathan Browning attributes in part to “super aggressive” industry sales activity extending into the Thanksgiving holiday weekend.

“Clearly the industry is aggressive at the moment,” Browning says in a conference call with reporters to discuss the November results. “We didn’t participate to the same extent. Our incentive spend on average was down 13% from the September timeframe.”

Auto sales website TrueCar says VWA incentives, including the VW, Audi and Porsche brands, rose 8.8% from year-ago to an average $2,332, while industry spiffs climbed 0.7% to $2,507. However, the site says VWA’s incentive-to-transaction-price ratio remained in check at 6.6% for the month, compared with the industry average of 8.2%.

VWA won’t change course to goose sales as the year winds down, Browning says, adding the automaker is confident the VW brand’s 2013 volume, at 373,689 units to date, will top 400,000 for the second year in a row.

“We see our pace of activity continuing through year end,” he says. “We’ll be competitive, but we won’t chase every last unit.”

Browning says the industry’s more-aggressive incentive activity and other factors are signaling the U.S. is in a “delicate phase in the recovery of the marketplace.

“We’ve all read the same reports in terms of credit profiles, the offers in the marketplace, the length of those (loan) offers,” he adds. “Certainly, as we look out to next year, we’re being pretty cautious in terms of our expectations for continued growth, because we certainly don’t want to be part of overheating the industry over an extended time period.”

Despite the negative performance, Browning says last month marked the second-best November for the VW brand since 1973. Its projected 400,000-plus units for all of 2013 marks the first time in 40 years it will surpass that volume in back-to-back years, he points out.

“So we’re setting a new baseline, and with future investment planned we’re confident of our growth plans,” the VWA CEO says.

More troubling was the performance of VW’s core models in the month. Jetta sales fell 16.3% daily, according to WardsAuto data, with Passat off 19.1% and Tiguan down 23.7%.

Those vehicles have been carrying the ball through much of the year, while the brand awaits a new-generation Golf due in 2014. Browning blames some of the decline for those models on tough year-ago comparisons.